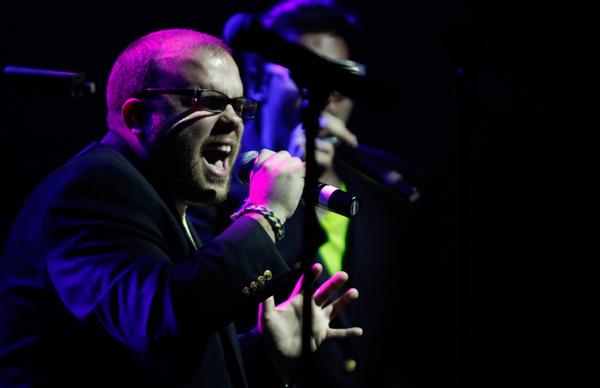 David Wayman/The Ithacan
Jimmy Knowles '12 belts out a solo during an Ithacappella concert last spring. Ithacappella joined forces with Premium Blend and Voicestream, also Ithaca College a cappella groups, to record their cover of "Born This Way."
By Imani Brammer — Contributing Writer
Published: September 6, 2012
With the power of strong harmonies and melodies, Ithaca College’s a cappella groups Ithacappella, Premium Blend and Voicestream took to the microphone with one goal in mind: acceptance.In her senior thesis documentary titled “Born This Way: The Documentary,” Daisy Krikun ’12 chronicled the college’s three a cappella groups as they recorded, rehearsed and performed Lady Gaga’s “Born This Way” hit together last semester.

The documentary was screened Aug. 29 as a part of the “Out of the Closet and Onto the Screen” film series. The documentary gives an inside look at the musical journey of the three groups working together. It also gives a look at the issue of bullying in the Lesbian, Gay, Bisexual and Transgender community.

All proceeds from the a cappella groups’ single went toward Lady Gaga’s Born This Way Foundation, an organization that aims to foster an acceptance of the beauty of differences among people. Further proceeds will also go toward the Aly Fornie Center, a LGBT homeless shelter in New York City.

Junior Hannah Sands, a member of Premium Blend, said the a cappella groups discussed what “Born This Way” meant to them. They wanted to ensure that they would be able to elicit all of their personal emotions on stage and wanted everyone to know that it was more than a performance.

“We sat down for so long and thought so much about the meaning behind it, and we really tried to leave it all on the stage,” she said. “The fact that it was for such an incredible cause made it more of an emotional experience than I expected.”

Former Ithacapella President Jimmy Knowles ’12 is a strong advocate for Lady Gaga’s campaign. He said it doesn’t matter what the audience identifies with because the documentary is purely relatable.

“I don’t see it as being about just being gay or straight,” he said. “It doesn’t matter who you are, what you are, what you believe in, who you’re attracted to. You just have to be yourself and accept that you may have some quirks and some things that are different about you.”

Krikun said creating an uplifting documentary was the perfect opportunity to support a cause because bullying has been such a serious issue in recent years.

“In the middle school years, peers all over are in such an in-between of knowing what’s right and what’s wrong,” she said. “There are definitely adults who still conduct bullying to people around them.”

Krikun said she was thrilled that after the documentary was shown, several people came up to her and thanked her for making such an endearing and empowering film. They wanted their family members who didn’t support homosexuality to see it, she said.

“The risk of suicide in the LGBT community is increased by eight times if their family is not supportive of their sexual orientation,” Krikun said. “‘Born This Way’ is such a self-empowering song, and it speaks to anyone who’s ever felt like they wanted to be a different person because they were ashamed of themselves or they thought other people were ashamed of them.”

In spite of family abandonment, peer bullying and shameful emotions being hurdles faced by LGBT community members, Sands said she finds comfort in knowing that such strong support is being given by the a cappella groups. She said it is a heart-wrenching problem, especially because it is a dilemma many people can relate to.

“Everybody has their own story, so we all have slightly different takes on the meaning,” Sands said. “But there is the same general concept of being who you are despite any kind of adversity.”

For a schedule of more Out of the Closet and Onto the Screen films, visit http://www.ithaca.edu/sacl/lgbt/events/sfs10/.