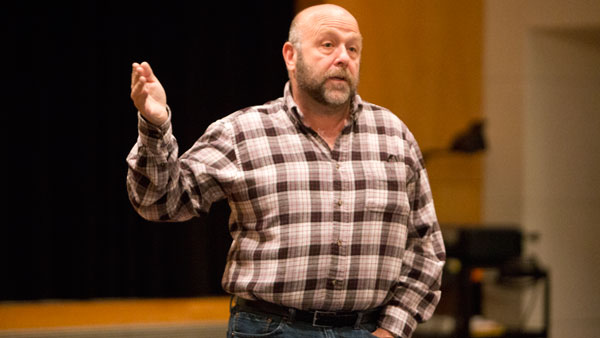 Erica Deschino/The Ithacan
Dan Heffner '78, a Hollywood film producer, gives a talk Feb. 28 in the Park Auditorium. Heffner is best known for producing the "Saw" horror movie series. He comes back to the college annually to meet with students and faculty.
By Michael Caffrey — Staff Writer
Published: March 5, 2014

Hollywood producer Dan Heffner ’78, best known for producing the “Saw” franchise, made his annual appearance at Ithaca College during the last week of February, spending several days on campus with both students and faculty. Heffner hosted an open session with students in Park Auditorium Feb. 28. He screened his 2013 film “Knights of Badassdom,” along with answering questions.

Staff Writer Michael Caffrey sat down with Heffner and discussed his recent film, the seven-film “Saw” franchise, his time at the college and what’s next for him.

Michael Caffrey: You screened “Knights of Badassdom” for the students. What is it about?

Dan Heffner: The movie is about a group of live action role-players who inadvertently, over a weekend of role-playing, bring to Earth a demon from hell, and throughout the course of the weekend, they realize what is happening, and they have to battle to kill the demon.

MC: Very cool. Now, of course, we can’t talk to you without talking about “Saw.” You have mentioned that horror isn’t your favorite genre, so why did you keep going back to the “Saw” movies?

DH: Horror is truly not my genre of choice. The original “Saw” movie I came into because I worked with one of our other producers, Gregg Hoffman, and he called me to help with the movie. I also felt like the first film was much more of a suspense film than a horror film, so I was more drawn to it. We were hoping to just make a little movie and hoped to make the money back. So when it became so successful and Lionsgate [Entertainment] ordered the second, it was just kind of a natural flow, and it just kind of took over my life, and as they say, the rest is history.

MC: What do you think made the “Saw” franchise so marketable and successful?

DH: I think one of the things that people enjoyed was that, in some ways, “Saw” was like the old serial movies where every week you’d come in and see the next episode. We always were very careful to make sure the film had a beginning, middle and end, so that if you hadn’t seen any of the other movies you still had a full movie that you would enjoy. But, if you had seen the other movies, you enjoyed it that much more. I think it was something new and different, and we kind of changed the face of horror movies. We had that suspense element to it. We did have our twists and turns. When you had previous horror franchises like “Friday the 13th” or “Halloween,” there were always certain horror elements that were always the same. We tried to stay away from that kind of stuff.

MC: Are there more “Saw” movies on the horizon?

DH: I’d hope so. We’re working at it. We’d like to do “Saw 8.” We’ve been working very diligently to come up with a storyline to not let the fans down. We feel that we had a really good, strong franchise, and we only want to bring it back if we do it justice.

MC: You like to visit the college every year. What compels you to come back and visit so much?

DH: Honestly, I find it very rejuvenating. I enjoy seeing the next generation of filmmakers. I grew up in an environment in the entertainment industry that was very much a mentoring business. I had known a lot of people who were old-timers who, when I was just starting, took the time and the energy to teach me how to do different aspects of the business, and to me, that’s what growing up in this business is all about, and I found out in today’s world that happens less and less, so I try to do my part.

MC: Is there one specific thing you like the most about coming back to the college?

DH: It’s a beautiful place to be — not so much at 12 degrees, but I’m used to it at this point in time. But mostly it’s the people. I’ve built some close relationships with the faculty and administration, so I always look forward to my trip.