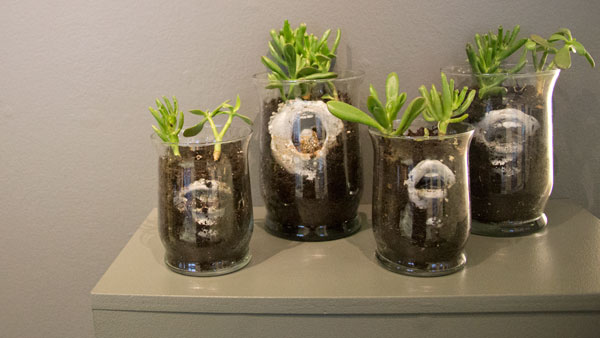 Secured by a network of fragile strings, a miniature boat made of folded paper stained with different shades of blue hangs from rods on the ceiling, inches above the ground. This piece is surrounded by the paintings, illustrations and sculptures by seniors at Ithaca College, all of which are displayed in the Handwerker Gallery.

“Lifeboat,” created by senior Kelly Morgan, will be featured in this year’s senior art show “Letters to Our Future Selves,” along with works by 30 of her fellow senior classmates. The exhibition will be on display in the Handwerker Gallery from April 17 to May 18.

“Letters to Our Future Selves” was curated by faculty from the Department of Art and the Department of Cinema, Photography and Media Arts. Students in the Museum Practices and Methods class, which is taught by Keri Watson, assistant professor of art history, designed and created the layout for the show’s catalogue. The catalogue, to be released the week following the show’s opening, will include an introductory essay along with short bios of the seniors featured in the show.

Morgan said “Lifeboat” is a piece representative of her relationship with her father. To create the boat, Morgan used a printing technique on folded paper to generate the appearance of waves at the bottom of the boat.

“It’s supposed to be a little ambiguous — is the boat floating or sinking?” Morgan said. “It’s still floating off the ground, but there’s water in the boat. It relates to dealing with your problems in general.”

Not all students participating in this year’s show are art majors. JP Keenan, senior documentary studies and production major, entered his work and was selected to show one of his photos from a collection featuring Amazigh Moroccan women in rural villages. Inspired by the beauty and pride of an ethnic group indigenous to North Africa, west of the Nile Valley, Keenan photographed Amazigh women who eagerly welcomed him into their everyday lives to help tell their story.

Keenan’s photo in the gallery displays a young Moroccan woman staring hauntingly at the camera from beneath the folds of her brightly colored pink leopard print hijab. The bright colors create a stark contrast juxtaposed on a dull courtyard wall.

While in Morocco, Keenan collaborated closely with a Moroccan journalist to capture the everyday life and authentic beauty of Amazigh women. Keenan said he is proud of how he was able to capture these women the way they were, rather than as exotic or stereotypical ethnic women, which is what he said he sees often in photography.

Also drawing on culture, senior Lauren Connelly has three pieces in the show inspired by her Native American heritage and anthropology course work. Connelly’s grandmother and father, members of the Onondaga tribe of the Iroquois League, were inspiration for two portraits that were hand-drawn with pen on a white canvas.

Connelly joked she spent her first semester on her couch, drawing each intricate detail of her family members’ faces, noticing the uncanny resemblance between her father and grandmother as her work progressed.

“There’s no third portrait of myself because I’m not full Native American,” Connelly said. “Technically, I’m not even a part of the Onondaga tribe just because I’m a quarter, whereas my dad is half and my grandma is full. I’m an illegitimate member of my own family.”

Connelly’s other piece in the show, “Hidden Voices,” was inspired by her anthropology course work. After reading about the unveiling of different archaeological sites, Connelly came up with the idea to install life-sized sculptures of human mouths planted in dirt, barely visible under the soil in clear glass jars. The appearance of the buried mouths symbolizes stories from the past trapped under the earth waiting to be revealed, Connelly said.

Mara Baldwin, the director of the Handwerker Gallery, worked closely with gallery staff and several seniors in the show to mount and install the artwork. The theme of the senior art show, “Letters to Our Future Selves,” is relatively vague, allowing room for a variety of pieces from students in different departments.

“There is a theme for this year’s show, ‘Letters to Our Future Selves,’ that’s just kind of a framework … there are a lot of things that [this theme] could possibly mean,” Baldwin said. “That’s intentional because the students are not submitting work together as a collective unit, they’re submitting separate projects.”

The seniors who submitted works all had different interpretations of the theme. Keenan said he hoped his future self would continue to pursue the photographic work he is genuinely passionate about.

“It’s so easy to get caught up in doing the cliche thing that gets the money and feeds a certain machine,” Keenan said. “I hope my future self doesn’t have to feed that machine, and I hope that I can find a way to navigate the world of photojournalism while not perpetuating stereotypes.”

For Morgan, the theme wasn’t about adhering to a specific message, but rather sparking a larger conversation about social issues. Morgan described her work as a personal reminder that will inspire her if she ever loses her drive.

“It doesn’t matter if people understand what I’m trying to say with my artwork,” Morgan said. “I just want them to start talking about something, because you can’t do anything without starting a conversation.”