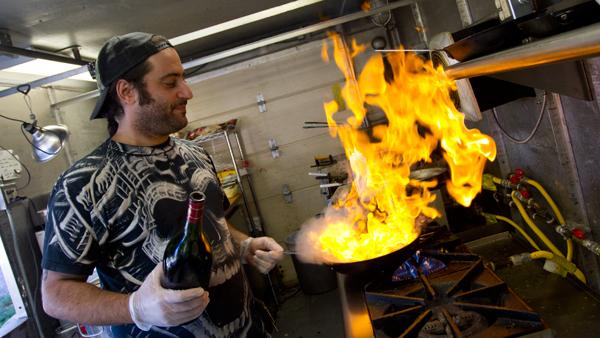 On the corner of West Seneca Street sits a big white truck with a colorful yellow skull painted on the side. Inside the truck, sauces are simmering. Shiny kitchen appliances heat up Muenster cheese, bacon, fresh spinach and onion. Circus Truck is a street food vendor where hungry Ithacans can get both food and circus entertainment. The ringmaster is a confident, self-made chef and sideshow artist named J.P. Vico.

Vico’s Circus Truck is a one-man operation built by Vico himself over the course of three years. The truck has been serving food in the West Seneca Street parking lot since May 26, inhabiting a bare space with an Italian-inspired mobile restaurant.

As an independent food-seller, Vico does everything he can to make his dishes accessible. He tries to completely separate the street vendor experience from the restaurant experience, he said.

“[Commerce] started with people selling stuff in the streets,” Vico said. “The whole concept of it goes back forever. There’s no middle person. When I make food here, I can make what I want to make, and I can get it right to you, hot and fresh, and you’re outside, and there’s cool air, and you’re enjoying this hot tasty thing.”

Vico’s love of food came from a number of jobs in the industry. Though he has held positions in construction and office work, nothing satisfied him the way a kitchen does, he said.

“I had an office job for six months where all I could think about was how I wanted to quit,” Vico said. “I talked to my boss one day, and told him I just couldn’t do it anymore. I got a cook job on my way home. Even when I was at that job, on my lunch break I would go into the diner and see that they wanted cooks, and I would just want to cook for them.”

Vico said he got the idea for Circus Truck 10 years ago when he was living in Arizona. He saw a woman selling ice cream in a truck, but on the side of the truck she also sold burritos. The truck inspired Vico to start his own business.

Vico said he has always been interested in the culture of carnivals and street-fairs, and he decided to receive training from professionals at a sideshow school on Coney Island. He puts his skills to use as a guest performer with the stage name Johnny Lowlife for The Whiskey Tango Sideshow, an Ithaca-based performance group that’s mainly a burlesque dance troupe but also does sideshow acts.

Ithaca College junior Brendyn Weiss frequents Circus Truck thanks to his friend Kyle Ulvert, an Ithaca resident, who works with Weiss at Just A Taste on The Commons. After meeting Vico, they all connected over a shared love of music.

“One day Kyle told me, ‘Go to the Circus Truck, you’ll get awesome food,’” Weiss said. “So I came here, and I met J.P., and we rocked out one day and just had an impromptu rock-out session.”

After that, Weiss said he now sometimes drives down in between classes to grab a bite. He’s an enthusiast of Vico’s street vendor style.

“This truck is awesome,” Weiss said. “I like the atmosphere — it’s a cool experience.”

“The breakfast burrito is the most satisfying thing I’ve ever had,” Ulvert said. “It filled a void in my life that I had for a long time.”

Vico puts in 70 hours a week gathering materials, cooking and serving from his truck. Acquiring all the materials and permits for the truck was a lengthy process, which he juggled with raising two boys and emotionally supporting his wife through nursing school. Vico also has little direct competition from other food trucks, because it’s very difficult to acquire the proper permits in Ithaca, he said.

“There’s a lot of healthy, positive things that people want to do, and not only is [the city of Ithaca] denying healthy positive things for the community, but they’re keeping people from making a living,” Vico said.

He’ll also give food to the homeless who come by the truck and see his sign. Independent food-selling has been a completely liberating experience for him, he said.