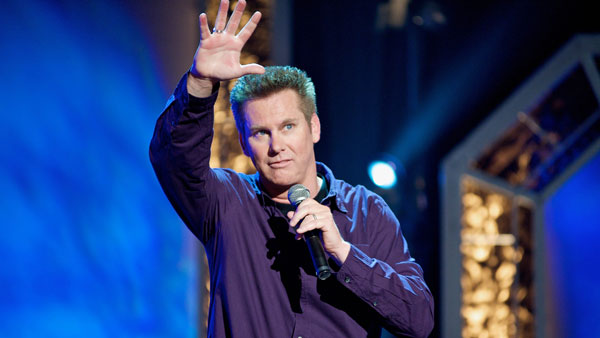 COURTESY OF BRIAN FRIEDMAN
Brian Regan will perform on Oct. 27 at the State Theatre. The 56-year-old comedian is known for his mundane, clean humor and his 10 record-breaking sold-out shows in January 2012 in Salt Lake City, Utah.
By Steven Pirani — Staff Writer
Published: October 21, 2013

The State Theatre of Ithaca is hosting stand-up comedian Brian Regan on Oct. 27 for a night of laughs. Regan surged into the comedy scene with his 1997 release of “Brian Regan: Live,” propelling himself to celebrity status in the stand-up realm. He broke the record for most consecutive shows by a stand-up comedian in January 2012, with 10 sold-out shows in Salt Lake City’s Abravanel Hall.

Staff Writer Steven Pirani spoke with Regan to discuss the comedian’s fame, where he finds humor and his upcoming performance in Ithaca.

Steven Pirani: Your comedy has become so famous because of your focus on the mundane. Is your goal to bring humor into standard living?

Brian Regan: Hopefully, if there’s any kind of tone or theme, it’s that it’s just a guy, just a normal guy, living in our culture like anybody else, trying to get through life. Doesn’t mean any harm to anybody. Yet the world is a peculiar place. It’s hard to work your way through life without some weirdness. There’s a formula for sitcoms, it’s “fish out of water.” You take a fish, and you take it out of the water, and it flops around, and therefore it’s funny — you take someone and put them in an atmosphere where they’re not comfortable, and it’s funny. But I’ve always said, that’s not my comedy. My comedy is “fish in water, and still uncomfortable.”

SP: Ever since “Brian Regan: Live,” you’ve kept your jokes clean. You haven’t resorted to profanity or shock humor. Why?

SP: You’re doing an 80-city tour and have been bouncing all over the nation. What has that been like?

BR: It just kind of goes on and on and on. But I enjoy it, I’ve always enjoyed it, and I hope I can continue to do it for a long time. I think one [thing] that I like about it is, people don’t fake laugh. When you’re on stage and you’re getting a room full of people going, it’s an honest communication that you can trust.

SP: What would you say to someone who wants to get into comedy?

BR: Be careful not to figure out what the audience wants. I think the more successful people are going to be people who are doing what they want to do, and let the audience find that. So one thing I’ll do on stage one time — and it’s a very specific technique that works for me and might work for others — if I feel like I don’t quite have an audience when I’m on stage, and I’m not quite getting them, I try to say to myself, ‘Alright, forget about these people. Pretend I’m in the audience, and make me laugh.’

SP: Ithaca will be seeing you on October 27. What can you say to people who have tickets or may be purchasing them?

BR: Well, I give an ironclad guarantee that I give $1,000 to every single person that comes to my shows.

SP: I may have to buy some tickets.

BR: You’d be stupid not to go! Do I need to put the disclaimer on there? Now, the disclaimer: that was said for the purpose of humor. But no, I don’t have this profound thing — I promise I’m going to try, and I hope you laugh a little bit.

For tickets to see Brian Regan, go to www.stateofithaca.com/brian-regan