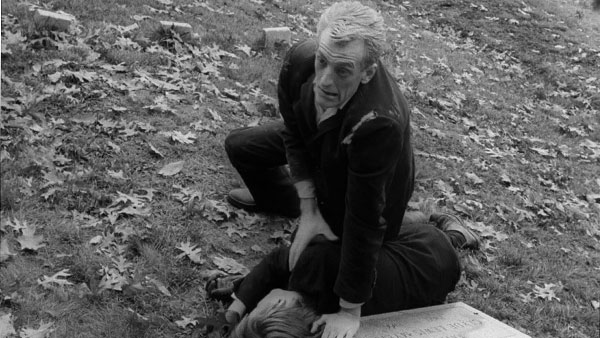 Courtesy of The Walter Reade Organization
William Hinzman appeared as the first zombie in “Night of the Living Dead,” directed by George Romero. The second annual Ithaca International Fantastic Film Festival will screen this film among other “fantastic” movies.
By Tylor Colby — Staff Writer
Published: October 30, 2013

It has been 4 1/2 decades since the premiere of George Romero’s classic, “Night of the Living Dead.” But at a five-day movie festival, held Nov. 13–17, fans of classic horror and independent movies alike can see this film and others screened in their original format.

The second annual Ithaca International Fantastic Film Festival, presented at Cinemapolis and Cornell Cinema, will feature 27 movies as a part of six different themes, such as international and documentaries. Unlike last year’s festival, which ran three days, this year’s festival will run five days.

Hugues Barbier, the festival’s founder, said he is excited about the expansion of the festival, as it will allow more space for movie themes, such as the action series “Reel Volatility.”

While Barbier said he is confident all of the films being presented are fantastic in their own right, the term “fantastic” is being used categorically. In order to be considered “fantastic,” a movie must have elements of ambiguous, supernatural forces, such as the movies “Alien” or “Bushido Man,” a movie in which a Samurai warrior must eat the local cuisine of his opponents in order to defeat them. By using a looser definition of fantastic, the IIFFF allows more outliers of the genre in order to ensure quality entertainment for the festival’s attendees.

“After ’68, they were bringing these extremely more violent movies, like ‘Texas Chainsaw Massacre,’ ‘The Last House on The Left’ … it was not fantasy anymore,” Barbier said. “They were looking for a new term to define this thing.”

According to Barbier, the media defined this shift by coining the phrase “fantastic,” and it stuck.

Josh Johnson, the festival’s lead film programmer, said that while this year’s IIFFF has a focus on revivalism and old movies, his objective is to create a program that pushes the boundaries of fantastic to entertain the audience.

“The two goals for the festival are really to expand awareness of this type of filmmaking,” Johnson said, “and also provide an experience for the audience to make it very entertaining and fun and worth their time.”

Johnson said his goal is to choose films that are not only fantastic, but films that also connect with the film-goers. He said he does this by adhering to conventional terms of fantastic through a wider scope.

“We have two films this year — one, ‘Bending Steel,’ which is about the phenomenon of steel bending … it has a huge humanist appeal to it,” Johnson said. “And while it doesn’t have any direct connections with the types of films shown at the festival, we thought it would be really good for the audience.”

One of the main attractions of this year’s festival is the Retrospective theme, which includes movies that were filmed from the 1960s to 1970s. Retrospective is centered on the work done by science-fiction writer Dan O’Bannon, known for scripting the film “Alien,” which is also in the theme “Rethinking the Monsters!”

Over the past few years, the movie industry has seen a shift from 35mm print, which consists of physical strips of film, to digital production. This creates a divide between old and new. 35mm movies will be screened at Cornell Cinema, and digital movies will be presented at Cinemapolis.

Railey Savage, manager of Cornell Cinema, said the cinema’s 35mm projector screens the movies how they were when made at the time of their premieres, which gives the viewer a more authentic experience.

“Cornell Cinema is the only theater in town with the capability to project 35mm prints — Cinemapolis and Regal Cinema are completely digital,” she said. “For the IIFFF’s Dan O’Bannon retrospective, all six films are being shown on 35mm, which is, aesthetically, more true to the origins of cinema, and all of them will look great on Cornell Cinema’s screen.”