Growing against the grain 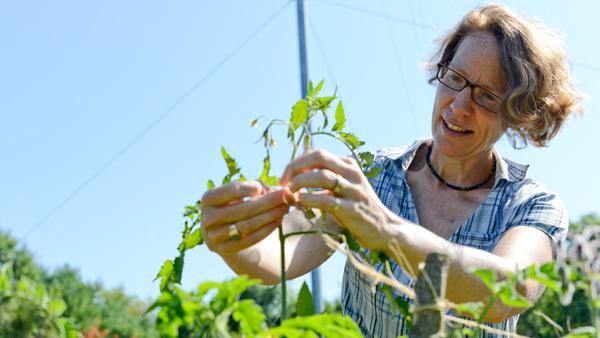 Rachel Woolf/The Ithacan
Politics professor Kelly Dietz examines the leaves of her plants in one of nine gardens on her homestead.
By Megan Devlin — Staff Writer
Published: September 12, 2012

Junior Samantha Mason spent this summer filming on her professor’s 38-acre property located on the outskirts of Ithaca. As a documentary studies and production major, she wanted to create promotional videos for the Finger Lakes Permaculture Institute, the learning community that the homestead becomes one season out of the year.

The homeowners, politics professor Kelly Dietz and her husband Michael Burns, have hosted a number of permaculture workshops and courses at their home since 2009. There, they not only teach the theory of permaculture, an ecologically and socially conscious design method for creating sustainable ecosystems, but they practice it as well.

The nine gardens located at the front of the property burst with a rainbow of orange, yellow and magenta perennials whose edible petals top off a fresh mix of greens from the growing “salad bar,” which contains baby arugula, red-leafed lettuce, beets and carrots, among other leafy bites. Dietz said tending to the gardens is a great break from her academic summertime tasks.

“It’s a great thing to do to balance with my research and course prep,” she said. “I can spend the morning in the garden and the afternoon under the pine tree writing.”

Edible perennials are Dietz’s main focus, which she said is often perceived as an unusual approach to gardening. For her, the notion of having plants that supply food for most of the year, and that don’t need replanting, is what attracted her to them.

Snipping off a leaf from one of the self-regenerative plants, Mason pops the crisp peppery  green in her mouth. Savoring the taste of her garden-to-plate experience on the property, she said this summer was the first time she was hands-on with the ecologically sound and economically viable practice of permaculture.

“It’s a lifestyle that’s completely opposite capitalism,” she said. “You’re not commodifying the earth. Capitalism has succeeded in separating humans from the earth we consume from. Permaculture reminds us we’re part of this system.”

This politicized approach to permaculture drove Mason to apply for a grant through Ithaca College’s Committed to Change Program, which helps students and faculty learn about and pursue careers focused on sustainability with an emphasis on local and global connections and partnerships. Mason said she wants to use the grant to show why sustainability alone isn’t good enough.

“Some people who know about permaculture think it’s another organic way of gardening, but really it’s a lifestyle,” she said. “It doesn’t sustain the earth, it replenishes and regenerates it.”

With the grant, Mason has been able to visually capture how people can teach, learn and understand these practices and principles at FLPCI. Burns, who co-founded FLPCI with Karryn Olson-Ramanujan, professor of environmental studies and science, and Ithaca resident Steve Gabriel, helps to teach the 84-hour Permaculture Design Certificate Course, which he said is the organization’s main focus.

Each morning, the course begins with a lecture in the Octagon, an open wood-beamed structure nestled in the pine trees just beyond the property’s mushroom forest. Afterward, the facilitator leads a hands-on training workshop, which is often followed by design practice. At the end of two weeks, participants have completed a standard practicum, which Burns said enables them to become a permaculture designer.

The idea of permaculture was birthed in the 1980s by two Australians who were researching natural ecosystems that can sustain themselves without degrading our resource basis. But Olson-Ramanujan said it’s exploding now because people are realizing we’re hitting critical junctures.

“People are looking for hopeful solutions,” she said. “Permaculture says the problem is the solution. It helps people understand how systems are interconnected and then gives them the design skills to envision a different future.”

The permaculture design process is grounded in a firm understanding of ecology, which Olson-Ramanujan said involves an ethical approach that aims to care for people and the earth. It also designs for surplus to address issues of equity and to regenerate ecosystems.

“Permaculture is not a new way to garden, it’s a new way to think about how we think interact with the environment,” she said. “Based on a firm understanding of ecology and systems, we use a design approach to wed the needs of humans and the help of ecosystems.”

As a certified permaculturist, Olson-Ramanujan teaches a one-credit course on campus that strives to give students a glimpse into the design skills required to build a different future. She said giving people a basic understanding of how to interact with the garden demonstrates how permaculture eliminates issues of peak oil, climate change and over-consumption.

One challenge to offering permaculture as the solution to global environmental and economic problems is that only those who are certified can teach permaculture because of copyright laws. Olson-Ramanujan fears that if she ever left the college, uncertified students and faculty could run into legal issues of continuing the projects on campus.

“We need more trained permaculturists to ensure the viability of the movement,” she said.

In an effort to educate more people about this growing trend, Mason has produced a 30-second promotion for a food forest workshop and a 7-minute promo for the Permaculture Design Course. While she hopes to create a longer piece to promote the course to students through the college’s Permaculture Club and the individuals connected to FLPCI’s permaculture networks, Mason said her main goal is to reach unintended audiences and show through the video how any “ordinary” person can take the permaculture course because it’s applicability to daily life.

“I want to show why a person working for a fashion magazine in New York City should be taking this course,” she said. “You can apply the principles of permaculture to any place, any climate, on any scale.”

While Mason had the opportunity to take the course, she said she didn’t want to compromise her dedication to filming. She said her decision to focus on filming made her more excited to participate in the course next summer.

“As the videographer for the course, I felt so a part of it,” she said.

From field trips to neighboring permaculture farms to film shoots below a shaded thick of pines, Mason bonded with course participants and teachers who she said involved her in the learning process while she documented.

“Permaculture is about consuming just enough for your basic needs without harming the earth,” she said. “It also has a big emphasis on community and sharing resources with fellow human beings. It’s not an individualized system.”

Echoing this belief, Burns said permaculture has three ethics: to meet the needs of humans, the earth and the ecological movement. Likewise, Dietz believes the sustainable, regenerative and waste-reducing aspects of permaculture apply the same critical perspective that she takes in her teaching and research.

“It’s challenging conventional ways of looking at things and brings power into the analysis of how things get produced, and who produces them and who benefits,” she said. “Also, it’s hard to study power relations without starting to recognize that they extend to the power relations between the human and non-human world, and what we tend to do with that relationship and how we see it as something really distinct from us.”

Mason said her experience volunteering on Burns and Dietz’s homestead this summer and beginning to adopt principles from their alternative lifestyle and worldview have confirmed her commitment to continue volunteering — whether it’s permaculture gardening or media promotion — with FLPCI for the rest of her college years and to reside in Ithaca after graduation.

“I want to have a demonstration site where people can come to my land and see permaculture in practice,” she said.

Leaning into the tall shoots of basil, Mason inhales the fresh aroma. She makes one final swoop around the garden to select from the wild abundance of kale, tomatoes and zucchini to use as ingredients for her lunch.

“Having my hands in the soil and putting plants in the soil, then getting to harvest it means so much more than buying a piece of clothing,” she said, proudly cradling the bundle of earth-coated vegetables she planted.