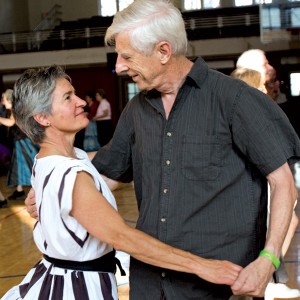 The full moon and street lamps lit up the wet pavement and cobblestone sidewalk. The summery, mid-60-degree weather spelled promise, drying up the remnants of the afternoon shower. The violins, guitars, flutes and banjos were poised and waiting under the Main Pavilion on The Commons. Almost everything was ready.

“Do we have any dancers?” Ted Crane, a Danby, N.Y., resident, said, watching as a group of six college students briskly walked past Center Ithaca and the Main Pavilion.

“We have to pass the taxi,” Crane said, referring to a type of contra dance. “At least two of you come here and dance.”

“Sorry, we just had Thai food,” one of the girls called back.

As an Ithaca contra dancing caller and organizer, this has been Crane’s routine every Monday night during the summer. Some nights would be better than others, attracting an average crowd of 20 to 30 dancers. Other nights would start off slower. On a good night Crane might get 40 to 60 dancers throughout the course of the evening.

“There was one summer where the [Ithaca] police told us that they love us on The Commons, because all the people who they didn’t want on The Commons would just leave,” Crane said.

Crane can understand the hesitation of the passersby. Though Crane has been organizing contra dances in Ithaca for more than 30 years, he remembers what it was like to start dancing for the first time.

“The first night, your body fights you for a little while,” he said. “It’s like the caller says, ‘Circle left,’ and your brain says, ‘That way,’ but your body isn’t sure.”

From the sidelines, the dance resembles square dancing, another 17th century English folk dance tradition. Though square dancing requires eight dancers, contra dancing can function with a minimum of six, with dancers facing each other in two parallel lines.

It’s up to the caller to tell them what to do. “Do-si-do” means circle back to front with someone, while “swing” means holding hands with a partner and spinning round and round in a circle. “Gypsy” means circling around a partner without touching, while “star” means everyone puts their hand over another person’s forearm, linking together in a star-like pattern.

“It’s the sort of thing that, once you get over that hump where you feel silly doing this, people who attend the second dance probably never stop coming,” Crane said.

Harry Norcross, a 60-year-old Auburn, N.Y., resident who drives 30 miles to go to area contra dances, first learned how to contra dance in 1982. While in Bar Harbor, Maine, a mutual friend dragged him and his fiancée to a dance.

“It was difficult,” he said. “You just make a bunch of mistakes and keep wondering why you’re doing this. The weird thing is that you go to another one, and you wonder why you’re here again, and then you realize you’re hooked.”

Though Norcross has since been divorced and only recently started contra dancing again, he said the dance reminds him of a simpler time when he and his wife would take his kids contra dancing.

“It makes you think of things in the past,” he said. “And even if you don’t think about this past, a long time ago, people would do this in barns and stuff. I can almost imagine a whole bunch of tired farmers getting out on a Friday night and dancing in a barn someplace with fiddles and food.”

For Cornell University graduate student Ben Werner, the former publicity chair of the Cornell Contra Dance Club, Norcross’s imaginings were a reality. Werner said he attended his first contra dance when he was a baby.

“There’s a picture of me in a slide sling on my mom’s hip while she’s dancing,” he said.

Though Werner does not remember his first contra dance, he said he would bring a sleeping bag to dances as a child. He would curl up on the floor while his parents danced through the night.

The CCDC and Crane’s group are two of the three contra dancing groups in Ithaca. While Crane organizes weekly dances on The Commons during the summer, and at the Bethel Grove Community event every week, the CCDC organizes monthly dances at the Memorial Room in Willard Straight Hall at Cornell. Werner said CCDC dances have attracted 150 attendees, and the club’s end-of-the-year dance last May brought in 30 new recruits.

“Sometimes people think it looks sort of hokey and they don’t understand why people have so much fun, but after, I often hear people say ‘It’s the best thing ever,’” Werner said.

Like the CCDC, Hands Four Dancers of Ithaca, which started as a non-profit affiliate of the Country Dance and Song Society in 2003, also holds bigger contra dance events — averaging about 150 to 250 attendees — about six times per year.

Tom Gudeman, president and one of the founding members of the HFDI, said the reason contra dancing is so popular is because it’s an easy-to-learn folk dance that is very accessible.

“It kind of becomes addictive,” he said. “You look forward to it.”

Contra dancing takes place throughout the U.S. In New York state there are dances in bigger cities like Syracuse, Buffalo and Albany, to smaller communities like Owego or on The Commons in Ithaca.

With the lively Celtic tunes under the shelter of the Main Pavilion on The Commons — calling like a Siren’s song — passersby would slow down as they approached the music. They would then stop and watch.

“This is fantastic!” a woman said to her husband on the sidelines.

“We need one more dancer,” he said.

Seamon discovered contra dancing about a year ago when his grandfather told him about a clipping in the newspaper. He had showed up at the Bethel Grove Community Center — an old preschool with pale blue walls and faded hardwood floors off of Slaterville Road in Ithaca — where he met Crane and a community of contra dancers.

Seamon didn’t know what he was doing.

“At first it’s really disorienting, and people push you in the right direction,” he said.

However, Seamon kept coming back, falling in love with the simplicity of the dance. Before long, he found himself teaching others the dance.

Now, on Labor Day, Seamon stands poised with his button-down, long-sleeved shirt and black dress pants. His black hair is combed back. He stands in front of the Main Pavilion with a group of about nine dancers.

Crane gives the group a quick tutorial, walking them through the patterns he is about to call. About five minutes later, he turns to the band.

The band begins to play.

The Cornell Contra Dance Club’s next event will be from 8 to 11 p.m. Sept. 29 in the Memorial Room in Willard Straight Hall. Admission will be from $2 to $5.