Kruger Brothers perform in Ithaca for the first time 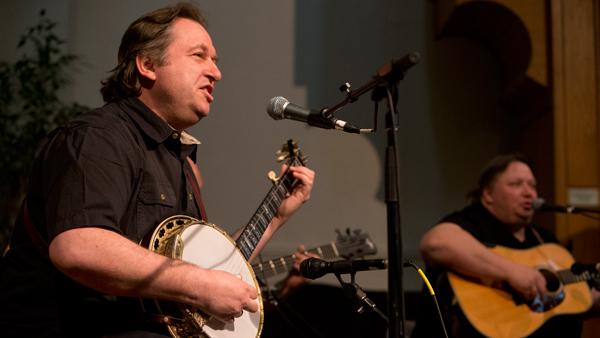 Durst Breneiser/The Ithacan
From left, Jens and Uwe Kruger of the bluegrass band the Kruger Brothers play a concert in the Unitarian Church of Ithaca on Feb. 24. This was the Kruger Brothers’ first performance in Ithaca.
By Kacey Deamer — Online Editor
Published: February 27, 2013

It was a Sunday, but the Unitarian Church of Ithaca was not filled with its usual congregation. The pews were filled with bluegrass music lovers and players, and the pulpit was moved to the side of the stage to accommodate three chairs, six microphones, two amps and the band. It was the Kruger Brothers’ first performance in Ithaca, and the audience was clearly excited to be a part of it.

The Kruger Brothers have gained national acclaim for their take on Americana folk and bluegrass music. Jens and Uwe Kruger grew up in Switzerland but had a love for bluegrass that brought them to the U.S. in the ’90s, with the help of one of their idols, Doc Watson. Now calling South Carolina home, the brothers, Uwe on guitar and lead vocals and Jens on the banjo, with bassist Joel Landsberg from New York City, travel the country and world playing bluegrass music that is truly their own, producing about one album per year.

Rick Manning, producer of the Winter Village Bluegrass Festival held in Ithaca each January, acted as concert promoter for the Kruger Brothers’ visit. Manning said the inspiration to bring the brothers to Ithaca stemmed from the same reason he began Winter Village — he wants to put Ithaca on the map for bluegrass music.

“They really fit my image of what bluegrass music is,” Manning said. “They’re really virtuoso players, instrumentally, and they write really good songs that are really heartfelt, about the human experience.”

“I would like there to be more of a pickin’ scene here, and I think a lot of people would be inspired by having [bluegrass] music here,” Manning said.

The Unitarian Church of Ithaca made for a cozy performance space as the older audience was parallel to the stage, which allowed them to interact more with the band. After the first two songs, banjoist Jens Kruger joked with the audience over their overwhelming applause.

“When you clap so long, we can’t play as much,” Kruger said.

An audience member yelled back, “You’re too good not to clap.”

Their music is exactly as Manning described: heartfelt, honest and instrumentally impressive. When Jens and Uwe weren’t joking around between songs, the trio would play through, seamlessly transitioning into the next song. Some lyrical and some instrumental, the songs encouraged the audience to sing along or sway in their pews with eyes never shifting away from the brothers’ movements.

After one song with heavy banjo playing, a man in the audience joked with his neighbor that Jens Kruger plays more notes in one song than he does in an entire year. Similar comments were made in hushed voices or yelled to the trio, always partnered with applause.

The set began just after 4 p.m. and, even with an intermission, lasted well past the two-hour schedule. At 6:30 p.m. the brothers took their final bow and moved to a table near concession and merchandise tables to chat with their fans.

Uwe Kruger said their visit to Ithaca, though short, had been filled with good food and good people. He said the show itself, and the venue, were particularly wonderful.

“This was a real nice, cozy little show,” Uwe said. “We were able to do some different things, and it was just a wonderful audience. Every time we come up North our music seems to fit really well.”

After the concert, once the coffee and cookies were sold out and all of the CDs and DVDs had been autographed, a small group of audience members traveled to Manning’s home for a private banjo workshop led by Jens.

“It’s part of the whole workshop thing, workshops and learning,” Manning said. “Jens does a lot of these things, and economically it’s another thing they can do. You know, no one’s getting rich here.”

For Richard Silver, the concert and workshop were well worth the 10-hour drive from Winterport, Maine. Silver said he’s a longtime fan and friend of the band.

“They are musicians who have wonderful listening skills,” Silver said. “They hear each other so beautifully that the wonder of their music is how they interact.”

Silver, who plays the mandolin, joined the gathering at Manning’s house after the show. He said watching and listening to the Kruger Brothers encourages him to continue pursuing music.

“Whenever I’m around them it’s inspirational,” Silver said. “So when I go home, I practice more.”