LGBT organization plans a night of drag and games 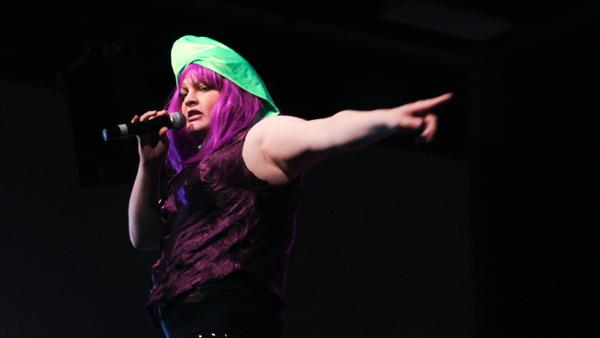 When freshman Sam Lloyd first heard Prism, a lesbian, gay, bisexual and transgendered student organization, was hosting Drag Bingo, he was nothing short of ecstatic. Immediately, he asked his female friends to borrow clothing to assemble his attire for Prism’s first Drag Bingo event.

“The last time I wore a dress, it was a little red leopard print number,” he said. “But I think I am gonna go Bowie style this time!”

Prism, one of the four LGBT groups at Ithaca College, will be hosting its first Drag Bingo at 8 p.m. Oct. 15 in The Pub. The event, which will mark the group’s first drag event of the year, is free, but a donation is recommended.

Students are encouraged, but not required, to attend dressed in drag. Junior Colton Bready, Prism’s secretary and “unofficial drag expert,” said as part of the all-inclusive ideals of the club, Drag Bingo will not only be open to drag queens but also to drag kings.

“It’s ‘Drag Bingo,’ not ‘Drag Queen Bingo,’” he said. “There will be drag kings as well. It’s an often-overlooked factor that women dress in drag to look like men as well as the more typical inverse, and when I’m involved in a drag event, I make sure that no one feels left out.”

Freshman Zach Mota said he is looking forward to the social aspect of the event.

“I hope to be able to get together with a bunch of different members of the community and be able to socialize with people that are interested in the same issues that I am,” Mota said.

Lloyd is also attending the event with hopes to meet more people within the LGBT community.

Aside from the social part of the event, there is a charitable portion to support a LGBT-related cause. Prism treasurer junior Linda Harrison said donations from the function will go toward the organization’s next event: a charity drag show in the spring.

“The drag show in the spring is our big show,” she said. “The money we get from that goes to The Trevor Project.”

The Trevor Project is a suicide prevention organization for members of the LGBT community that provides support in times of emotional instability. As part of its program, the group maintains a lifeline, known as The Trevor Line, to provide LGBT teens with the support and help they need.

At the drag show Prism held last year, they managed to raise around $250 for The Trevor Project. This year it is their goal to at least double that amount.

Drag Bingo is open to everyone. Part of the goal of this event is to educate those who may not know much about the culture of drag, so even those who know nothing about drag are welcome to attend, Bready said.

“The event will aim to broaden student perspectives on perceptions of gender as a whole, as well as expression through the human body through things including but not limited to hair, clothing, makeup, tattoos and piercings,” he said.

Bready hopes to open up discussion of drag to students and show them the many dimensions of the performance.

“Drag is an art form that embraces theater, music, dance, comedy and cosmetics as a form of artistic expression,” he said. “Within the art form, people also express otherwise repressed or differently expressed parts of their personalities, thus forming a drag culture.”

For more information about Prism and their upcoming events, visit ithaca.collegiatelink.net/organization/prism.