Moments in the woods: Dark themes rise in Sondheim musical 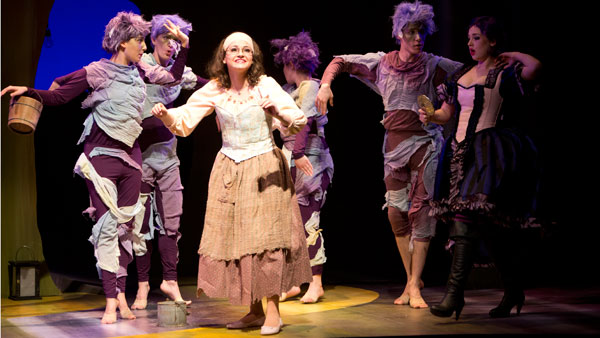 The Hoerner Theatre in Dillingham Center has seen many intricate and detailed sets grace its proscenium stage. Now, a cut-out of an eerie forest and accompanying hanging lightbulbs decorate the space, a simple setting for the myriad of classic tales that make up the theater’s latest production, Stephen Sondheim’s “Into The Woods.”

The show follows several of the Brothers Grimm’s most famous fables, but centers on the tales of “Jack and the Beanstalk,” “Little Red Ridinghood,” “Cinderella” and “The Baker and the Baker’s Wife.” The play opens with Cinderella (senior Katie Drinkard) wishing to go to the ball, Jack (senior Avery Sobczak) being forced to sell his cow named Milky White, Little Red Ridinghood (sophomore Rebecca Skowron) visiting her grandmother (freshman Caelan Creaser) and the Baker (senior Nick Carroll) and the Baker’s Wife (senior Grace Stockdale) wanting to have a child. These stories progress and ultimately converge as the characters venture into the woods, initially to complete separate tasks but eventually aiding one another. But as the play unfolds, the audience learns the stories are not as innocent as the versions they grew up with.

Director Susannah Berryman, who makes her first foray into Sondheim’s work with this production, said each production of the show is different because of the creative team.

Sondheim and librettist James Lapine infuse a darkness to the story that is akin to the original tales. Many of the somber thematic elements of the show stem from the inclusion of adult plot points, such as betrayal, adultery and death. The inclusion of these themes creates a juxtaposition of the classic fairy tales against a new, grim world.

The show’s music director, Brian DeMaris ’02, said Sondheim has a reputation for being musically complex both vocally and musically.

“[Sondheim] is a rather operatic composer, not in terms of the vocal style but in terms of how he constructs his pieces; the level at which the music is playing a role in the storytelling is pretty extreme,” he said. “His shows often have complex harmony and complex rhythm, unique orchestrations and he uses really traditional forms, but he expands them.”

Though the music in “Into the Woods” poses vocal challenges, DeMaris said the cast has worked to overcome them. Specifically, DeMarris said the syllabic, note-heavy vocal lines combined with the complex harmonies were tough for the cast to learn.

“It’s really difficult to learn all of the pitches in Sondheim because they’re not necessarily memorable melodies that you can sing or that you leave the theater singing,” he said. “So it’s all of these tiny little pitches they have to learn, and they have worked really hard and have done a great job with that.”

Drinkard was no exception to experiencing the musical challenges of the show, describing them as especially elaborate and laborious. She said for Cinderella, especially, the vocal jumps up and down can be difficult to perform — the most complex music she has performed so far at the college.

“Everything about the show, musically, is challenging: the rhythms, how much text is there and how much you have to spit out,” she said.

Berryman said producing this show does not come without its own set of challenges, including its length, running approximately three hours, and its complex subject matter.

“[The show] is large in its vision,” Berryman said. “I joke that the play is about ‘everything in life,’ and it is a long piece with a lot of scenes and numbers to stage.”

As part of the journey “Into The Woods,” Berryman has added a group of characters, known as Tree Spirits, bringing a new creative element to the production. Throughout the show, the six Tree Spirits, junior Tony Canaty; sophomores Daniel Ghezzi, Kyra Leeds, Miller Brackett and Alexa Cepeda; and freshman Celena Morgan, take the form of different creatures, including Cinderella’s birds and Jack’s cow. These characters have been played by puppets and props in other theatrical productions.

“The play is full of magical effects, so many that the technical ‘tricks’ of the show could risk weighing down a production and distracting from the story,” Berryman said. “To allow those tricks to dominate the production did not seem a meaningful use of the time and money of the design and technical team when the story should be first and foremost.”

Morgan, despite previously playing Little Red Ridinghood in high school, said she felt her new role as Milky White helped her be creative in a show she was already familiar with. Specifically, she said, figuring out how to accomplish basic animalistic tasks like walking or running proved excitingly new.

“Because I am Milky White, and I am on stage a lot, it has been fun discovering new ways how to be a cow,” she said. “How can she communicate with other characters? It has just been so great to have the freedom to create.”

Drinkard said she feels strongly that audiences will be able to connect with the production on a deeper level than basic entertainment.

“‘Into The Woods’ is big and presents so many life challenges and is such a journey that it really resembles the journey that we take through life,” she said. “There are so many things that people are going to be able to relate to or apply to their lives that it’s not time specific but universal.”