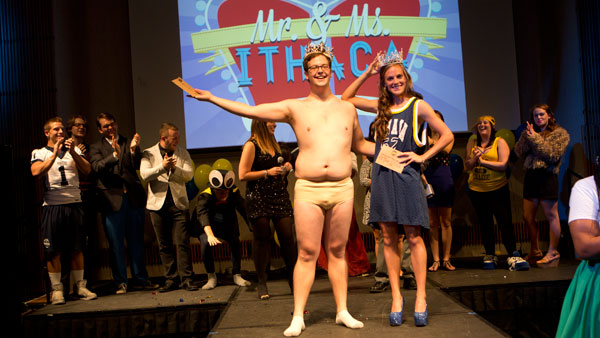 Senior John Horan sports only nude underwear, while senior Meredith Jones wears a blue basketball T-shirt and matching rhinestone-studded pumps on the stage in Emerson Suites. The winners of the Mr. and Ms. Ithaca pageant never fail to don their finest evening wear when accepting their crowns.

The emcees, seniors Nick Rojas and Francesca Toscano, announced the order of the events for the night. First was spirit wear, a portion where contestants modeled the college’s colors. Casciani batted baseballs that exploded with confetti upon hitting them, while Brown used an IC Spirit Week banner as a cape. Second, was the formal wear section, where the contestants wore gowns and tuxedos and answered questions, such as, “What do you want to do before graduation?” to which Schuta answered, “I’d like to get an A in a class.” Another question was, “What would you tell your freshman self?” to which Frey answered, “I would tell myself to shut up because I talk too much.”

One change to this year’s competition was the absence of the swimwear portion, and all contestants performed their talents. James said she liked that everyone was able to do something they were good at instead of having to model a swimsuit, unlike last year.

The talent section had attendees and judges in stitches from laughing. Short skits, dances, jalapeño pepper eating and comedy acts were seen throughout the night. However, Horan and Jones stood out during their performances. Horan danced to a mash-up of Miley Cyrus hits, portraying her evolution from “Hannah Montana” to her wildness today. His performance began with songs like “Best Of Both Worlds” and “Party in the U.S.A.” As he stripped off his costume, revealing more and more skin, Horan then twerked and lip-synced to “We Can’t Stop” and  “Wrecking Ball.”

During the Ms. Ithaca contestants’ talent portion, Jones performed the traditional “Evolution of Dance” sequence of YouTube fame. She also put a spin on Mike Jones’ song, “Mr. Jones,” as she had the entire crowd yelling, “Who? Mer Jones!” in place of the lyrics “Mike Jones” at the end of her dance ensemble.

But there could only be two winners. For the first time, the champions were not solely decided by the judges. Voting was conducted via text messages as audience members were given numbers they could text to vote for their favorite contestant.

In addition to the crowns and titles of Mr. and Ms. Ithaca, Horan and Jones also won free Senior Week passes.

Jones said she feels good to have won the title of Ms. Ithaca. She hopes to meet new people and make more friends because of it.

“I’m really excited, and I hope that I’m a good representation of the senior class,” she said. “I hope I don’t let anyone down.”

Horan, still clad in his nude, spandex underwear, said he is honored and grateful that everyone thought of him to win — even though he was not sure he would win, himself.

“I’m so stoked,” Horan said. “I was nervous that I wasn’t going to pull it off, but just feeding off the energy of the crowd made it work so well. I had so much fun with it.”