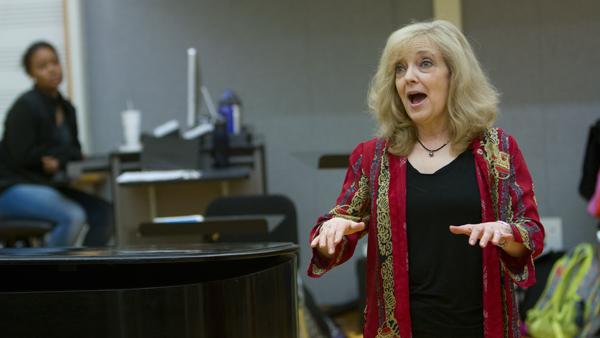 Durst Breneiser/The Ithacan
Janet Galvan, professor of music education and performance, conducts a rehearsal Tuesday in Beeler Hall in the Whalen Center for Music. Galvan has taught at IC since 1983.
By Evin Billington — Staff Writer
Published: May 1, 2013

Janet Galvan, professor of music education and performance, stands at a podium covered in sheet music before a crowd of singers. She raises her arms, and the group begins to sing, always keeping time with her delicate but precise hands as they float in the air.

As a nationally acclaimed conductor, Galvan has traveled to countries all over the world and across the U.S. in her 30-year career at Ithaca College. She has been a member of the Robert Shaw Festival Singers — a Grammy Award-winning singing group — and has conducted in the U.K., Greece, Canada and other parts of the world. Most recently, Galvan has been appointed conductor for the New Jersey Junior High School All-State Chorus, which will perform Saturday in Flemington, N.J.

John White, professor of music theory, history and composition, has worked with Galvan since they both started in 1983. Since meeting, he said, they have worked closely together. White’s teenage daughter has been singing in Galvan’s Ithaca Children’s Choir since she was in elementary school.

“Janet is hired nationally to do these choirs because she’s good,” White said. “She brings energy and creates a wonderful sound out of singers. She is always willing to explore new, different, exciting, out of the ordinary repertoire.”

Galvan said she had dreamed of conducting and teaching since she was in seventh grade, when she first sang at an all-state competition. Her hands gestured in the air as if conducting, and her blue eyes lit up as she recounted her first of many all-state experiences. However, she said, back then it was not typical for women to conduct choral groups.

“Luckily, where I went to school, my choral director never discriminated against female conductors,” she said. “I didn’t know until I left [University of] North Carolina that it was odd for females to conduct all-state choirs. He just let me think I could do anything.”

Having that confidence, she said, helped in her career, but she still encountered obstacles because of her gender. Galvan said she often felt pressure to go above and beyond in her conducting jobs because she was not only representing herself, but all women.

“I’ve always felt that pressure — that I’ve got to be good — because if I’m not great, then that cuts off an opportunity for other women,” Galvan said.

Toward the beginning of her career, she felt this discriminatory attitude and resistance even among students, both female and male.

“I realized it said more about them and how they felt about themselves than how they felt about me,” Galvan said. “It tended to be the young women who were really insecure and didn’t have a lot of faith in women that were most resistant. They would come around, and often I’d get little apology notes slid under my door … I really and truly don’t see that in any of our students anymore.”

Senior Ashleigh Ciambriello has been singing in the college’s chorus and women’s chorale under Galvan’s direction since she was a freshman. She said one reason why she looks up to Galvan is because she is such a strong and empowering teacher. Ciambriello has also brought a similar attitude to the all-female a cappella group Premium Blend, of which she is president.

“She’s made me feel empowered as a woman,” Ciambriello said. “I feel like something that I’ve brought from the chorale world into [Premium Blend] is that women have a lot of power and have a lot of ability to help inspire or influence other women.”

Over the course of her teaching career, Galvan said her performance at a benefit concert in Ireland with Ithaca College’s Women’s Chorale in 2005 stands out to her. The performance was right after the Indian Ocean tsunami and earthquake in 2004, and she conducted with an orchestra, professional singers, the women’s chorale and other Irish choirs.

“We raised 10,000 euros for tsunami victims, so that was using music in the best possible way,” she said. “We also got to sing in a monastery, and women had never sung there, ever — we were the first women — and when we started singing from the balcony, the priest said, ‘Ah, the angels have arrived.’ It was very cool.”