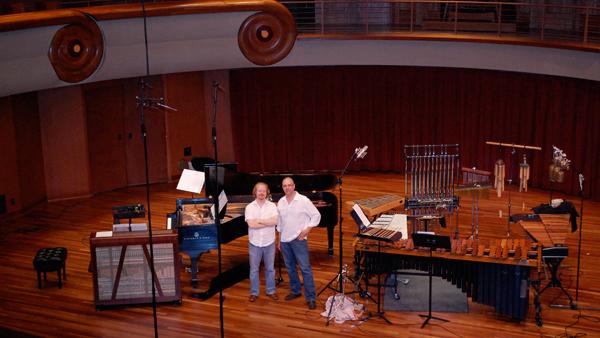 Courtesy of Jeffery Meyer
From left: Director of Orchestras Jeffery Meyer and Paul Vaillancourt pose on the stage for their college tour for their piano-percussion band Strike. They finished their tour Jan. 17.
By Jackie Eisenberg — Accent Editor
Published: January 24, 2013

In 1996, two students at SUNY-Stony Brook became friends through their love for contemporary classical music. Those students are Jeffery Meyer, associate professor of music and director of orchestras, and his piano-percussion duo partner Paul Vaillancourt. After at least 10 years of performing together, the duo, Strike, returned from its Southern college tour at Columbus State University and University of South Carolina last week.

In the comfort of Meyer’s office, Accent Editor Jackie Eisenberg spoke to Meyer about the tour, his music and his plans for the future.

Jackie Eisenberg: You just finished this college tour. How is it performing in front of college students?

Jeffery Meyer: It’s always a blast. First of all, it’s really fun to always get back together with him. He’s a good friend of mine, and it’s fun to be on the road. We performed at Columbus State in Georgia. It was nice to be out of the winter, it was 75 degrees, so we spent a few days rehearsing this music. All the music we played was recorded three years ago on our first album, called “Convergence,” and so we’ve been touring this music for the last few years. We asked five different composers to write for us, and so we ended up with five new pieces that really represent the landscape of what’s going on in contemporary classical composition. So we took four of those pieces and made a program around it and also did two solo pieces for piano and percussion on either side to kind of round out the program.

JE: So you said you play contemporary classical music?

JM: The pieces that we have are all influenced by various musics that are floating around. There are pieces with elements of jazz, one piece has elements of rock and others are atmospheric and ritualistic, and it’s really very diverse. One of them actually pulls from Chinese folk music. So there’s been, in the last 20 or 30 years, a kind of splintering of styles. That’s why we feel like we’re so lucky in these pieces, in that we have a very diverse look at all these styles. So most often, on our programs, there is something for everybody in some way. There’s always a piece that somebody comes up and says, ‘I really loved this one,’ ‘I really didn’t like this one,’ and it changes from person to person, and it’s a very inviting and interesting program.

JE: This album you made was music from three years ago. Have you made anything new recently?

JM: No we haven’t. We’re starting to think about our next project, and I think what we’ll do is something similar to the first album. We’re currently discussing which composers to approach to write us new pieces and then the other thing we were thinking about was to add people to our duo for this recording. So there might be a trio or a quartet, so piano percussion and cello, piano percussion and violin — so those ideas are in the works. Probably sometime in the next few years we’ll embark in that direction.

JE: Do you ever perform any of your own pieces or do you usually have people write for you?

JM: No, neither of us are composers, although I do have a degree in composition, but I haven’t written anything for about 10 years, and Paul’s not a composer, so we ask the pros to write for us.

JE: So do you use different types of [keyboard instruments], like harpsichords?

JE: And the drums?

JE: So you have a performance coming up in Thailand. Are you excited?

JM: Yes, this summer. It would be the Ninth Annual Thailand International Composition Festival. I was featured there last year as a conductor, and the music director invited us to come as a duo right outside of Bangkok. It’s been running almost for 10 years, and it’s certainly the biggest, most important festival in Thailand.