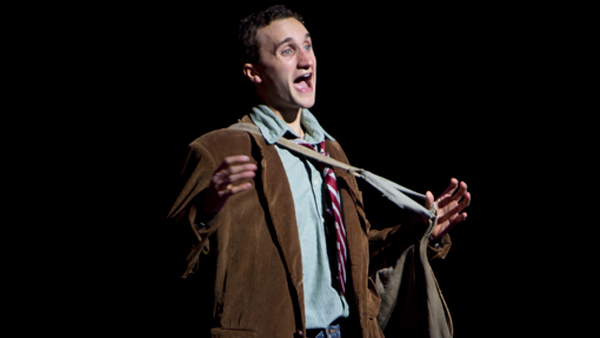 Shawn Steiner/The Ithacan
Senior Joseph DePietro performs in the theater department’s production of “Legally Blonde” as Emmett on Oct. 30 in Clark Theatre in the Dillingham Center. DePietro will perform in “Spring Awakening” as an adult character.
By Taylor Barker — Contributing Writer
Published: February 6, 2013

Senior Joseph DePietro wanted to be a movie star long before Ithaca College’s theater program was a prospect in his future. Film may not be in the foreseeable future for him, but performing definitely is.

DePietro is a musical theater student at the college. He recently played Emmett in the college’s production of “Legally Blonde,” but he did not start out as a leading man. In his hometown of Pomona, N.Y., his mother signed him up for an audition at his community theater at the age of 10 for a role in “Les Miserables,” now one of his favorite musicals. He played a small boy, and since then he has not stopped performing.

Four years ago, when DePietro was deciding where he would pursue his love for musical theater, Ithaca College stood out to him because of the intimacy of the classes and the family atmosphere, he said. Reflecting on his college experience, DePietro said he is happy with his decisions and the path he took his life on.

“I’ve worked hard and continue to work hard, and I like to think it has paid off,” DePietro said. “I’ve made it a point to put myself out there, even when it is not comfortable at first, just to try different experiences, meet new people.”

Though he said his work ethic has benefited him, DePietro also said while at the college he has faced some struggles. He has had to undergo intense critique in the musical theater department and learn how to manage his time.

“It’s a pretty intense major with the acting, singing and dance components,” DePietro said. “Time management was difficult for me, but I think I have finally nailed it down.”

He said he has been involved in a production almost every semester he has been at the college. He said for each production, rehearsals could be a maximum of 19 hours a week, and during check week, rehearsal time bumps up to five to six hours a day.

During his time at the college, DePietro said, he has participated in different productions, been a teacher’s assistant and mentored freshman musical theater students.

Freshman Connor Briggs has DePietro as his senior mentor this year. Briggs knew him when he was in high school because they grew up in the same town. He said DePietro has had an impact on his college career through his mentorship.

“He has always been really helpful to me,” Briggs said. “Something that he has always taught me is just to be yourself.”

Jim DePietro, DePietro’s father, said to see his son grow from his role in “Les Miserables” to where he is now has been terrific. Jim said when DePietro was 10 years old his family never would have guessed he would be where he is today.

“To see that blossom into what he’s doing now and what he’s planning to do in his career is absolutely exciting,” Jim said.

DePietro’s two favorite productions he’s been in at the college are “The Light in the Piazza” and “Legally Blonde.” In “The Light in the Piazza” he was an understudy, and in “Legally Blonde” he was a lead, but he said both were excellent experiences. He said he views his understudy experience as being especially beneficial because he was able to learn from his fellow students.

“It’s incredible to learn from peers,” DePietro said. “You have to do what is set, but you don’t have to make the same choices. So there is set staging, and the music is the same, but you can find your own way within that.”

DePietro said “Legally Blonde” is a standout production for him because he was able to act with many of his friends, he had a wonderful role and the show itself was a great opportunity. Because Emmett was his first major role at the college, he was able to see everything he has learned click into place, he said.

“I was always able to see my peers do it and create these bigger roles, so it was fun to have the opportunity to do that and do it entirely on my own,” DePietro said.

This semester, DePietro is playing an adult in “Spring Awakening,” and he is auditioning for roles for the summer season. He said after graduation in May he plans to move to New York City and hopefully fulfill his dream of being on Broadway. However, he said he would be happy with other performance outlets like film or television.

“More and more actors come to New York everyday,” DePietro said. “It would be a dream to be working consistently in great roles that affect people and make them think, learn and grow.”

DePietro said he’s never doubted his career choice for more than a second because he loves acting.

“I would realize that’s what I love to do, and then I thought, ‘What else would I want to do? and I couldn’t possibly imagine,” DePietro said.