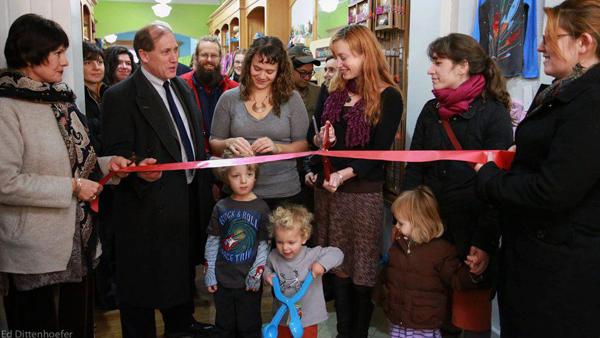 “Mommy, someone’s here,” 4-year-old Azalea Koschmann said as a customer walked into Bloom in Ithaca, a new women’s and children’s clothing and toy store and play place at 134 E. State Street on The Commons.

Azalea’s mother, Draya Koschmann, and her friend and business partner, McKenzie Jones-Rounds, said they opened Bloom in Ithaca because of their children.

“My daughter, she loves clothes and she sees that as something that she and I have in common,” Koschmann said. “She’s like, ‘Oh it’s so good we have a store because we both like clothes.’”

“We were like, ‘Hey, do you know what would be great?” Koschmann said. “‘If we had a place to do this in the winter, where we could sit and have coffee and let our kids do their thing.’”

Since then, the idea for Bloom in Ithaca blossomed from just a play place to a children and women’s clothing store with only fair trade, organic and American-made products. In addition to a clothing and toy store, Bloom in Ithaca will also have a play place at the back of their store with a slide. However, Koschmann and Jones-Rounds said it won’t be ready until mid-January. Groups may also be able to rent out the space to host classes, but all these plans are possibly in the works for the future.

Gary Ferguson, executive director of the DIA, said the concept will thrive in the Ithaca community because there is a void of children’s wear in the market.

“That’s an intriguing idea,” Ferguson said. “That you can make money from both not only selling clothing apparel but also providing a place for families and kids to have a real pleasant experience downtown.”

“When you go down to The Commons when the weather is nice, and you see the number of people who are down there with their kids in the outdoor play space — this is really an indoor version of that, so I think it will become popular with use,” Ackerman said.

Though the play space will not make its formal debut with the play place until mid-January, Bloom in Ithaca has already been well-received in the community. Out of the 28 businesses that competed in the Race for Space competition in June, Bloom in Ithaca was selected as one of the finalists and was awarded five months free rent. The winners of the competition were The Art and Found on The Commons and Life’s So Sweet Chocolate in Trumansburg. During the store’s ribbon cutting ceremony Dec. 5, Ithaca residents filled the skinny, 1,000-square-foot space, which used to house Morris’ Men’s and Ladies’ Wear.

Though Bloom in Ithaca took months of planning, Draya and Jones-Rounds compared the experience to a pregnancy.

“It was actually like nine months between the idea and opening, so it’s like, ‘Oh, we’ve had our baby now,’” Jones-Rounds said.

Bloom in Ithaca first opened its doors on Black Friday, and Koschmann said their store met a positive response.

“You could just see in people’s eyes that they were just ticking through their Christmas lists. They would get one thing and then think it’s their nephew’s birthday and get another thing,” Koschmann said.

Despite the community’s encouraging response, Bloom in Ithaca had many challenges leading up to its opening. Sarah Dwyer, operations associate of Renvyle Associates, which manages 134-136 East State Street, said Koschmann and Jones-Rounds had less than a month to prepare for their opening.

Jones-Rounds said she remembers pulling many all-nighters and sacrificing family time; however, she reminded herself that her family was the main reason she started the store.

“One of the days I was here late at night, my husband came in with my kids, and my 5-year-old son was like, ‘You know, I feel very special that you’re opening a store. I feel like other moms don’t have jobs like this,’” she said.

Jones-Rounds said the business allows her to spend more time with her children, and she plans to bring them with her to the building once a week.