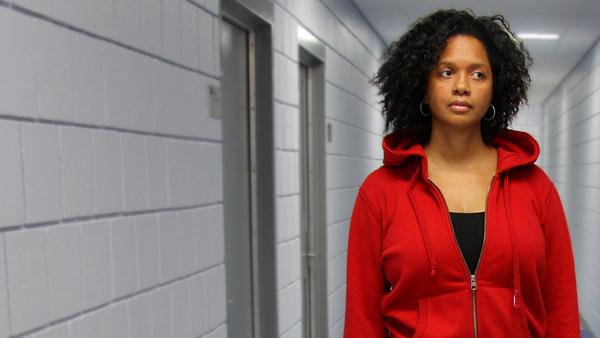 Courtesy of The Readers' Theatre
Cynthia Henderson, associate professor of theatre arts, stars in The Readers’ Theatre production of “No Child.” The play, that follows a high school teacher’s struggles, will be showing from Sept. 28 to Sept. 30 at The Space at Greenstar.
By Jackie Eisenberg — Assistant Accent Editor
Published: September 26, 2012

In The Reader’s Theatre production of “No Child,” a lone janitor mops the floors of an impoverished high school. A five-part choir fills the air with its joyous a cappella music, while the janitor sings quietly along with it.

Written by Nilaja Sun, the one-woman play-within-a-play showing at The Space at Greenstar is an adaptation of Sun’s life as a tentative drama teacher at Malcolm X High School in the Bronx. Known throughout the play as Ms. Sun, she struggles to teach a sophomore class filled with belligerent children how to analyze and perform the play “Our Country’s Good” by Timberlake Wertenbaker.

Cynthia Henderson, associate professor of theater arts at Ithaca College, portrays Janitor Baron, the teachers and all the students. Henderson is the founder of Performing Arts for Social Change, an organization that raises awareness for social causes through the arts. Henderson has performed in the one-woman show “Dorothy Dandridge: An Evening of Song and Remembrance” off-Broadway and is a member of Actor’s Equity. Henderson said this play was different than the ones she performed in the past.

The characters she portrays in “No Child” include Shondrika, a particularly sassy student; the children’s nervous schoolteacher; Ms. Tam, the uptight principal; Mrs. Kennedy; and the rebellious student Jerome.

“The 16 different characters [I portray], there’s slight variations that I go through, either vocally or physically, or vocally and physically,” Henderson said.

To portray the characters with little confusion, Henderson uses different body language to represent each student.

“Because I’m a singular person, it helps the audience know who’s speaking if there’s an idiosyncratic behavior for each person,” Henderson said. “I try not to repeat certain behaviors in other characters.  I try to do a little more separation.”

This is Henderson’s first production with The Reader’s Theatre and director Anne Marie Cummings. The pair only rehearsed together 12 times, but Cummings helped Henderson in any way she could.

“We just took little sticky notes, and we put them next to each character on these big poster boards so that the process wouldn’t seem overwhelming for one actress,” Cummings said. “Also in that process, we talked about their backgrounds, so doing that kind of work is absolutely essential.”

“[Baruch] and I picked the songs,” Sciscioli said. “I primarily chose the spirituals. Then he started preparing the chorus and sort of handed it over. Anne Marie likes to add live music. She likes to have vocal musicians come in for each play.”

In the beginning, Cummings said, people were skeptical about the a cappella music, but she wanted that sound to help convey the story.

“I knew in my heart that this play needed sound that speaks more to the emotional current in this play, because the subject is a very raw one, even to this day,” Cummings said. “So these are the voices of the people.”

“I’ve really loved the process,” Sciscioli said. “It’s really fun for me to be in a play because I’m a singer in a band, so it’s a different kind of show. And I haven’t really participated in theater since my time at Ithaca College.”

Cummings said the pieces came together very quickly because Henderson was easy to work with.

“Directing is like a puzzle, you have to bring all the pieces together,” Cummings said. “I love working with actors who take direction, and Cynthia was able to take my direction from the first rehearsal to the very end.”