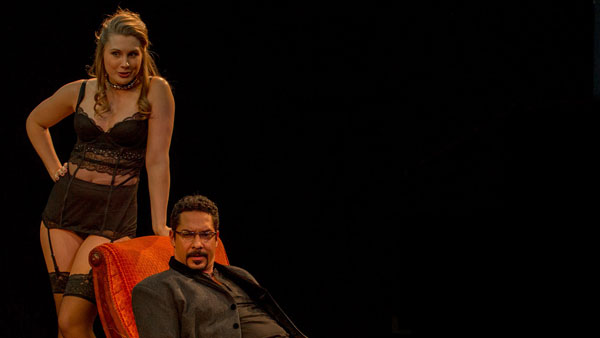 Loud cracks of thunder signal the dim stage lights to rise up on Thomas Novachek (Brandon Morris), a first-time director who is venting on the phone to his fiancee. After a long, unsatisfying day of auditions, he is ready to give up on finding an actress to play the lead role of Vanda, a proper and elegant 19th-century maiden with a continental accent, in his adaption of the 1870 German novel “Venus in Furs.” Just then, a tall, blonde Valley girl, who coincidentally goes by Vanda (Maddie Jo Landers) rushes in and reads for the role. To his obvious surprise, she portrays his ideal vision of Vanda perfectly and blows him off his feet. The more of the seductive script the two rehearse together, the more Vanda appears to know about the play and the story behind it than her ditsy first impression led on. But in the end, Vanda’s strong feminist values clash with Thomas’s adaptation of the story, and their conflicting opinions ultimately result in a steamy scene of improvisation between the characters, which unveils the true Vanda.

The highlight of this production is leading lady Landers. The blonde beauty works her leather lingerie and “dog collar” like a pro and proves to be a versatile powerhouse. She can effortlessly switch back and forth from ditsy, Valley girl Vanda to her seductive, polar opposite without batting an eyelash. While watching her all-star performance, audiences may be easily captivated by her, just like Thomas falls for Vanda’s spellbinding ways. She can bring about an eruption of laughter with her ditsy Valley-girl charm or make the room fall dead silent during serious, sexy scenes, but on occasion, it’s slightly difficult to keep up with Vanda’s multiple characterizations.

As a whole, the storyline is juicy and easy to follow. But after all of the hype and promotion the show received from the Kitchen Theatre for being “90 minutes of kinky fun,” it falls short. There are some sexy moments, including Thomas’s pantomimed spanking session and a scene when Thomas slips Vanda’s black, sexy dominatrix boots onto her feet. As he holds her legs and zippers each boot to its edge at her upper thigh, the two constantly moan and groan with pleasure, creating an undeniably sensual moment. But for the most part, the sexy nature of “Venus in Fur” isn’t all that titillating.

The set is rather boring with its aged hardwood floors; plastic, rectangular table and chairs; and long, curved lounge chair. But one clever feature is the stage lights, which are interactive and used by the actors as more of a prop than a technical element. At random moments, Vanda uses a dimmer on the wall to control the lighting to emphasize the mood of the scene.

However, the overall simplicity of the play is a definite perk because it allows the message of antidiscrimination to shine through. In the play, Thomas tells Vanda that people should not waste time on generalizing and reducing themselves to mere stereotypes, but as they continue to read through the script, Vanda accuses him of doing just that. By calling him out on his sexist, misleading interpretations of women, Vanda puts the idea center stage. Her persuasive actions encourage looking down on stereotypes and highlight individuality, which resultingly give a greater meaning to the play.

Thomas believes that people go to plays for passion they don’t get in real life, and in this case, he is absolutely right. In spite of not living up to certain expectations, “Venus in Fur” is a sexy yet comical show that leaves audiences both informed and satisfied.