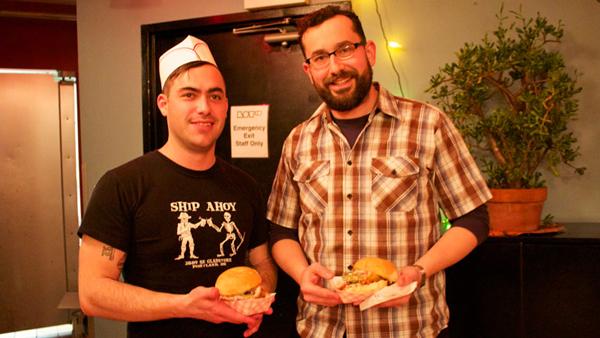 Fire up the ovens. Two Ithaca restaurateurs have started a pop-up kitchen serving street food at Lot 10, a bar on Cayuga Street.

Manny Flores and Gentry Morris, who worked at Mercato Bar & Kitchen, which has been closed since a fire in December, have opened Belly Ithaca, which serves pork entrees with locally sourced ingredients.

Andrew Defran, a financial adviser at Merrill Lynch and an Ithaca resident, showed up to Belly Ithaca on Friday for an after-work nosh, choosing to sample pork rillettes, a rustic pâté that Flores and Morris served on a toasted baguette and topped with red peppers. Defran said his interest in Belly Ithaca stemmed from his patronage at Mercato.

“Knowing Manny from his last venture and being curious as to the food, I wanted to come down and try it out,” Defran said. “It’s my first time at Belly Ithaca, and I’m glad I came.”

Flores, a New York City native whose culinary pedigree includes working at Manhattan’s Gramercy Tavern, said he has been thinking about the pork-centric pop-up since he moved to Ithaca three years ago.

“[Mercato’s fire] definitely aided the occurrence of it, but I will say that I left Brooklyn three years ago with the idea to do a pub called Belly, where the focus would definitely be the food,” Flores said. “It would be pork-centric. I moved here with that in mind, but now we get to be a little creative with the presentation. The idea, the fire and the space here [at Lot 10] naturally just led to it happening.”

“Food trucks and pop-ups are part of the same phenomena in that they are efforts by cooks to produce food with integrity at really low costs,” Edge said. “You can take more chances, because your investment costs are lower. You can take something that makes sense in your own swirly head and you can test it. It’s like a trial balloon. It just happens that the balloon is filled with deep-fried porchetta sandwiches between artisanal ciabatta.”

Flores and Morris said Belly Ithaca’s focus on pork stems from the resourcefulness of the pig. They said they are focusing on using lesser-used parts of the pig, such as the belly or the ham hocks.

“Pre-World War II, lots of families, both rural and urban, raised a pig, and it was something that sustained the family for the year; it came through using the whole animal,” Flores said. “With factory farming, there’s access to whatever we want, but that doesn’t do justice to taking a life and using all of it.”

The pop-up kitchen, like the food truck, has become a cultural phenomenon for foodies in recent years, providing both creative and economic benefits. It allows foodies to create or try new ideas without the costs of operating a permanent location.

Matthew Riis, one of the owners of Lot 10, said the pop-up kitchen was a perfect solution after they closed their kitchen last September.

“We stopped doing our restaurant because it was a challenge for us to develop that steady clientele we needed, and our bar took off a lot quicker,” Riis said. “We’re all about quality. These guys use all local stuff. They really prepare in their time and energy, so we’re definitely pleased to have Belly on board.”

“I love the food and the concept. It seems to work really well right here,” Ritter said. “It’s very laid back, and the food is superb.”

This article was originally produced by the Multimedia Journalism 48000 class.