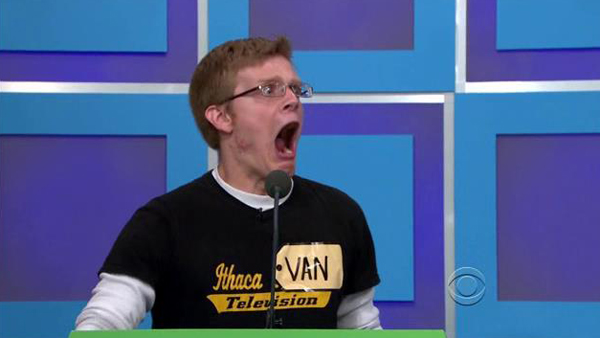 When junior Dylan Van Arsdale went to see “The Price is Right” while studying in Los Angeles, little did he know he would win the grand prize. Van Arsdale is currently interning for an award-winning production company, Bandito Brothers, while participating in the Ithaca College Los Angeles program. On March 29, he was the grand prizewinner of a 2013 Scion tC on the CBS game show, “The Price Is Right.”

Contributing Writer Karla Lopez spoke with Van Arsdale about his big win, his reaction and advice for future contestants.

Karla Lopez: What are you doing in LA right now?

Dylan Van Arsdale: Well I’m here in the ICLA program. I’m interning with a production company called Bandito Brothers. I’m in their post-production department, so I’ve been working on a little bit of visual effects work, a lot of media management and what not. It’s a company that released “Act of Valor,” which got an Academy Award this past year I think. Their big project has just been wrapped up, and so we’re starting some new projects now too that have been fun to work on.

KL: How did you get on the show?

DV: There are a couple sites that have tickets for every show you can imagine, and I saw that there was a spring break edition that was specifically just for college students, so I thought it was a really good fit. We got a lot of friends and a lot of classmates here, so we all got tickets. A lot of TV show tickets are free; it’s fantastic. I’ll be going to “Whose Line Is It Anyway?” in April, which I’m super stoked for.

KL: Was being at “The Price Is Right” what you expected?

DV: It was so much more energetic. They tell you to, you know, be really excited and clap like a maniac and freak out, but there’s just kind of an energy that takes over. You forget anything anyone told you and just freak out with everyone else. It was great being with all the other college students too, just because it was a very college atmosphere. Everyone could relate to each other, and everyone was really into it. With the winning aside, it was so energetic and kind of a surreal experience.

KL: What went through your mind when you were called up?

DV: I didn’t even know I was called up. My friends were pushing me out into the aisle; I didn’t hear them call my name at all. They have cue cards with the names on them so that you know to go up. I was just too busy freaking out.

KL: And when you won?

DV: I think my mind was just a blur of happiness. There was a GIF of me after they revealed that I won the showcase of me just freaking out, shaking wildly, going around hugging everyone. It’s just pure ecstasy. I don’t think there were any individual thoughts going through my head except, “Oh my god, oh my god, oh my god.” It was really exhausting. I didn’t expect to be so tired afterwards.

KL: Seeing your reaction, are you embarrassed at all?

KL: Do you have advice for anyone who wants to go on the show?

DV: Go with your friends and put in a good audition interview. They give everyone, like, a little 10-second interview before you go into the studio. They kind of screen, I guess, who would look good on TV or who’s enthusiastic, who’s energetic, and I guess I had a pretty good interview with the one producer who screened us.