Students WWOOF across the world 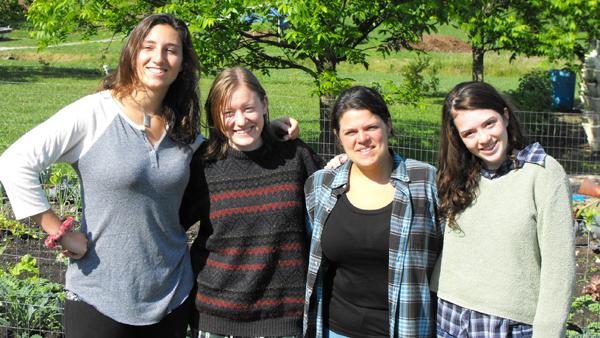 Courtesy of Allison Currier
On left, Junior Allison Currier poses with a group of volunteers from her WWOOFing trip at Spring Creek Farm in Elk Valley, Tenn. WWOOFing is an international organization that connects volunteer farmers with agricultural work.
By Jillian Kaplan — Staff Writer
Published: January 24, 2013

Junior Allison Currier woke up to the low crowing of roosters as she rose each morning at Spring Creek Farm in Elk Valley, Tenn. She would get out of bed and join a group of volunteers for a hearty breakfast of fresh farm eggs, toast and bacon. After the meal, she began to work on the soil, weeds and water and felt the earth under her fingernails. Here, Currier was contributing her services to WWOOFing farmers under a hot June sun.

WWOOF, World Wide Opportunities on Organic Farms, is a global network of organizations that links volunteers with organic farmers. The farmers provide food, accommodations and instructions on how to engage in organic lifestyles and work on organic farms. More than 50 countries participate, including all regions of the U.S.

Programs like WWOOF give participants the opportunity to learn about and practice organic farming. A minimal program fee — varying from country to country but usually under $50 — allows WWOOFers access to an online network of available farmers. WWOOFers can participate for as long as they want, usually with a minimum of two weeks on a farm.

Currier said she went WWOOFing because she wanted to learn how organic farmers are keeping in business with the current agricultural scene. She said she chose Spring Creek Farm after researching profiles on WWOOF North America’s website. She also thought the farm was accommodating because she could be around other volunteers and the host family seemed friendly.

Currier said her experiences gave her a newfound respect for farmers who don’t use machinery and run their farms on a small, family basis.

“There was one point when we were tying up tomato knobs to stakes in the ground, and that was just really repetitive, tedious work,” Currier said. “There were days that were just hot, and we were doing this repetitive planting. A lot of the work was actively, physically hard, but I knew what I was signing up for.”

Currier also had the opportunity to help her hosts sell produce at a local farmers market, which she defined as a key moment of her WWOOFing experience. During this time, Currier got to interact with customers while displaying the ‘fruits’ of the farm’s labors.

Junior Ryan Bince has a different experience ahead of him in Australia. He plans to land in Sydney on March 11 and will travel between farms until he reaches the West Coast. After taking a semester off, he said, he saw an opportunity to explore a lifestyle he has always admired.

“I’ve heard all these stories and songs about hitchhiking and train-hopping, particularly in folk music and country music,” Bince said. “There’s a big culture that surrounds it, and I really want to be involved in that.”

Bince was set to graduate a semester early but decided to delay his graduation to travel. By doing so, he said he anticipates leaving college with his friends while still experiencing an exciting and rugged journey abroad.

“I’ve always wanted to have an adventure, and I realized that after I graduate, I will be frantically searching for a job,” Bince said. “I may never get a convenient opportunity to travel.”

Former sophomore Rita Ouimet saw WWOOFing as a great opportunity to travel, so much that she withdrew from Ithaca College. Ouimet is now saving up money to drive across the country, where she will WWOOF for at least a month next spring on a small sustainable farm in California.

“I’m going to want to take my time and see the whole country,” Ouimet said. “So [my plans are] kind of one part traveling out there and one part WWOOFing.”

Ouimet said she researched about 20 farms on the WWOOFing network before making arrangements with a family whose farm is extremely efficient in energy production. She hopes to learn about sustainable energy practices as well as vegetable harvesting.

“The [farmers] I’ve talked to live on a small scale, where you work with your hands and get really involved in the processes and how everything works on their farm,” Ouimet said. “The place I’m going is also really off the grid, so I guess working on it comes with a lot of other sustainable practices.”

WWOOF isn’t the only organization that allows people to engage in a community and volunteer on organic homestays. Help Exchange allows volunteers to work in small, business-like farms or hostels in Australia, New Zealand, Europe, Canada and the U.S. Currier encourages anyone to take the opportunity to explore what WWOOF has to offer.

“There’s so much more out there than what you think,” Currier said. “Some people actually spend their time just getting to know other people and learning about farming, or learning about whatever they want to learn about and just living in a really free lifestyle. It’s a great exchange.”