Through the woods: The Readers’ Theatre to present intense thriller 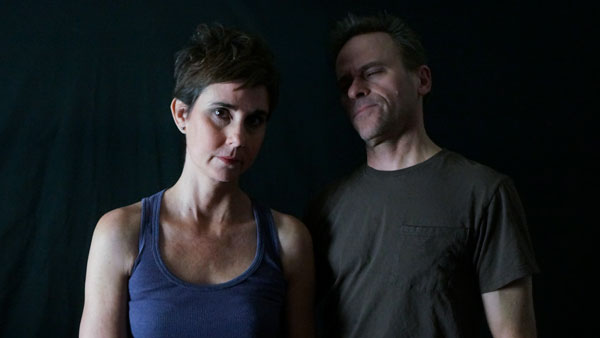 Courtesy of the Readers' Theatre
Anne Marie Cummings and Evan Stewart Eisenberg star in the Readers' Theatre production of "In A Forest, Dark And Deep" as Betty and Bobby, respectively, two feuding siblings.
By Tylor Colby — Staff Writer
Published: February 19, 2014

Many families have secrets they keep hidden from outsiders, leading to conflicts and resentment among relatives. In Neil LaBute’s play, “In A Forest, Dark And Deep,” however, the secrets are more complex and dangerous than in most families, proving that sometimes the truth is more toxic than the lies the family uses to cover it up.

From March 7–9, the Readers’ Theatre will perform a production of LaBute’s play at Cinemapolis. The play is directed by Cynthia Henderson, associate professor of theater arts at Ithaca College. Anne Marie Cummings, artistic producer of Readers’ Theatre, and Evan Stewart Eisenberg, local Ithaca actor, will be playing the two lead roles of Betty, the sister, and Bobby, the brother, respectively. Cummings said the play, which is a psychological thriller, is fast-paced because of the constant dramatic moments in the play.

“There’s a lot of things going on at once, and there’s a heightened sense of urgency from the first page to the end,” Cummings said. “It doesn’t really stop.”

The play takes place in a remote cabin where Betty has enlisted her younger brother Bobby to help pack up all her belongings, but the two siblings begin quarreling almost immediately. The cabin is presented in a minimalist fashion, the only props being two boxes of books and a six-pack of beer in order to focus more on the dialogue between the characters. At first, their disputes are mainly because of their stark personality differences. Bobby is a simple minded, blue-collar conservative with a New York accent who curses in almost every sentence, and Betty is a wealthy and reserved dean at a nearby college who struggles with her role in society. Eventually, though, their arguments turn to more personal matters, like their complicated relationship with their deceased parents and the secrets they keep from each other.

This results in tension between the characters that rises and falls throughout the play between bouts of casual conversation, eventually reaching a startling climax that leaves the characters in the rubble of their own feud.

While the play contains multiple layers of anger and deception, many moments demonstrate the siblings’ desire to help each other and how that overrides their most violent confrontations. After learning the final bit of truth about his sister, Bobby stops arguing with her just long enough for them to share a big embrace, providing a brief but significant glimpse into the compassion between the siblings.

Henderson said while the play is heavy on dysfunctional arguments between the two characters, she wanted to focus on their love, which drives much of the siblings’ actions.

“These two argue a lot, but if you look deeper into the psychology of it, these two care about each other,” Henderson said. “And even at that end moment, it’s almost like they’re little kids in the dark in the bedroom talking.”

Eisenberg said this characterization of Bobby and Betty is largely because of LaBute’s particular style of dialogue, which involves a fast back-and-forth rhythm between lines and often results in the two characters talking over each other in a casual, albeit somewhat abrasive, way.

“There’s nothing in the script that says Bobby has to talk in a New York accent,” Eisenberg said. “His writing really dictates this blue-collar flow, and for me it works.”

Cummings said this role is the hardest she’s had so far as an actor because of the layers of deception that her character has to believably present throughout the play. She said sharing commonalities with her character, like her age and complex life circumstances, helps her come into the role.

Eisenberg’s foul-mouthed, no-nonsense role appears on the surface to be much simpler than Cummings’ because of his less-complex character structure. However, Bobby has the majority of the script’s lines and movement, which showcases Eisenberg’s strong presence on stage. Eisenberg said his role had a few difficult aspects, but he was most challenged by the prospect of playing such an offensive brute. He said in order to do this more easily, he had to first come to terms with his own anger.

In order to help the actors tap into this realm of deception and anger, Henderson said she implemented various exercises that brought Eisenberg and Cummings to emotional places. One of these exercises involved asking the actors personal questions that required them to go to places that were emotionally uneasy in order to evoke their best acting.

“I didn’t like using the C-word towards my dear friend,” Eisenberg said. “But I have been really mad [before]. So I just tap into that energy of arguing with people, which I’m really good at.”