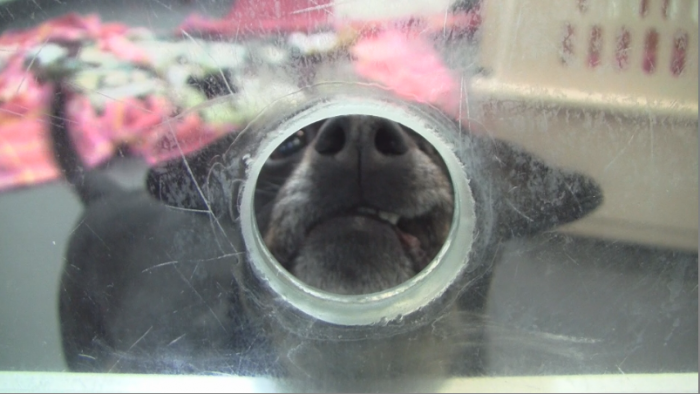 As visitors walk by the dog wing of the Society for the Prevention of Cruelty to Animals of Tompkins County, Scraps, a skinny brown Chihuahua mix, presses his nose against the small round opening in the window of his room, eyeing prospective adopters with curiosity. Some kneel down to say “Hello,” but many glance at the red adoption-pending sign on his door and walk on, giving their attention to other dogs who, like Scraps, have traveled across the country to avoid euthanization and find a family.

The SPCA of Tompkins County typically opens its doors to unwanted animals in the local community, but lately the animal shelter’s admittance has extended to include dogs from all across the country. On Jan. 13, staff members and volunteers of the animal shelter welcomed 20 dogs from Los Angeles who were scheduled for euthanasia in their original shelters.

The local SPCA collaborated with American Airlines and Best Friends Animal Society, a Utah-based organization that aims to spread its No More Homeless Pets agenda. They contact no-kill shelters to organize a transfer of dogs from overcrowded shelters to establishments that have the room.

“We also need to work with shelters that are reputable, no-kill and have the same principles as Best Friends,” Robin Harmon, LA branch’s Best Friends Animal Society Rescue and Shelter Coordinator, said. “We have found that in the Northeast and Northwest part of the country, there are shelters like Tompkins County who don’t get in very many small dogs.”

Volunteers for the SPCA of Tompkins County such as Liz Constable welcomed the arrival of the dogs. Constable said she was relieved when she saw the first two dogs leave with a family.

“All of these dogs would have been euthanized, and every one of them is so sweet,” Constable said.

Constable has volunteered at the SPCA for more than a year and witnessed the adoption of dogs from dog transfers in the past. This is the third dog transfer the SPCA of Tompkins County has been able to organize since its first in August.

“We’ve saved a total of 60 dogs since we started working with [Best Friends Animal Society],” Jim Bouderau, executive director of the SPCA of Tompkins County, said.

Best Friends Animal Society reached out to the SPCA of Tompkins County for the first exchange, but when Bouderau noticed fewer dogs in the shelter, he contacted the organization to inquire about another possible transfer.

“We had so few dogs,” Bouderau said. “We only had about four dogs about a week and a half ago.”

Within the week, the Best Friends Animal Society office in LA was able to set up a transfer of 20 dogs. The SPCA of Tompkins County asked for specific criteria for the dogs in response to the popular inquiries from prospective adopting families.

“The most phone calls we get are for small dogs and young dogs,” Bouderau said. “So we select a criteria that is under 25 pounds and under three years of age, specifically.”

The shelter received mostly Chihuahuas because of a high population of the dogs in the overpopulated shelters in LA. The rest of the dogs were what Best Friends Animal Society refers to as “fluffies,” or small, furry dogs, such as terriers and poodles.

International Airport to pick up the dogs and said the arrival of the dogs in their carriers was a startling sight.

“It’s kind of crazy when you see them,” Bouderau said. “They’re strapped to a wood pallet, so literally a forklift comes and places them on the ground. They’re treated like cargo, but they’re in a temperature-controlled, pressurized part of the cargo hold in the plane, specifically for live animals or other things that might be perishable.”

Best Friends Animal Society covers the cost of the airfare through a partnership with American Airlines. They receive a reduced rate from the airline and have managed to transfer hundreds of dogs to no-kill shelters across the country. The dogs arrived vaccinated, spayed and neutered, and the SPCA of Tompkins County was reimbursed by the organization for all travel expenses.

Harmon worked directly with Bouderau to exchange the dogs from LA to Ithaca and said she is grateful for no-kill shelters such as the SPCA of Tompkins County.

“They are giving [the dogs] a wonderful chance for new lives with loving families,” Harmon said. “It takes a lot of committed people working together to try and have a time of no more homeless pets.”

As of Wednesday, at least three dogs have found a new home in the local community, Scraps included. Staff members, such as intern Amber De Jong, were moved by the experience and are grateful the shelter could make a difference in the dogs’ lives.

“I think it’s a 70 percent kill shelter that we’re taking dogs from,” De Jong said. “We’re giving them a chance to find a home, and I think that’s beautiful.”

Bouderau said he does not anticipate a delay in the adoption of the rest of the dogs. In previous transfers, the dogs did not stay long before they were brought into new homes.

“We’ve had people who were interested and didn’t get [a dog] because they went so quickly,” Bouderau said. “That is why we select the criteria because we’re not just helping them save lives but we’re also fulfilling a need in our own community that exists.”