Yoga Remix relaxes students during midterms through meditation and dance 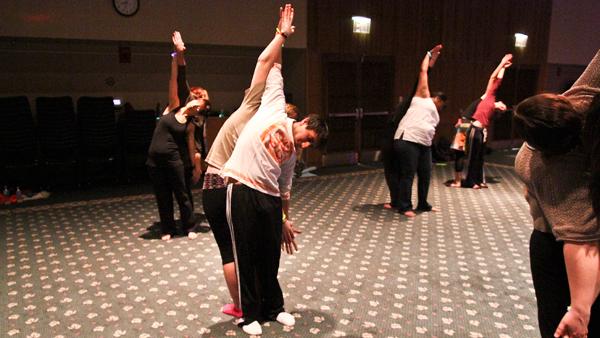 Wholesome drinks, relaxation and dance will help students take a break from midterm stress during the launch of The Art of Living club’s first-ever Yoga Remix party Wednesday.

The Yoga Remix, which the club will host in Emerson Suites, is a substance-free party that encompassed yoga, meditation and dance music in one night.

Junior Gautam Singhani, president of Art of Living, said the Yoga Remix is a promotion event for his Yes + Plus workshop in April, which is a five-day program focusing on physical exercise as well as improving mental health through concentration- and memory-improvement exercises.

Singhani said he wants students to be able to go to a party without having to take drugs or drink alcohol to have fun. He said the main goal of the Yoga Remix s to get the body on a “natural high” that resulted from deep relaxation from yoga.

“I’m trying to promote substance awareness, a substance-free dance party,” Singhani said. “A lot of parties, a lot of raves are now [associated] with drugs and alcohol, and I really wanted to see if people would be interested in trying a party without drugs and alcohol.”

The featured artist was Butterthief, also known as Bhakti, a kirtan Sanskrit band that focuses on meditation and serenity. Kirtan music consists of call-and-response chanting accompanied by drums, while Sanskrit is an Indo-Aryan language. Butterthief played at a Yoga Remix in New York City on Aug 20.

“They combine Sanskrit chanting … and they bring a new type of vibration,” Singhani said. “They have this type of rock fusion dance music, and it’s not like this monotonous chant, it’s something you can move your feet to.”

The Yoga Remix is a sister event to the Yoga Rave, which the national Art of Living Foundation launched four years ago in Argentina. It spread to other countries in South America and eventually reached Europe and North America. Yoga Remix is a smaller event, in that it’s usually held in smaller venues, while Yoga Rave is a much larger event, with thousands of people in attendance, Singhani said.

The event is integrated, meaning it includes deep yoga and dancing at the same time. People could do both, but when the dancing got too intense, the action assumed a new tone.

“You stretch yourself, you go dance, you have fun, it’s explosive,” Singhani said. “And then immediately, when you hit that high point of dancing when everyone has that point of zest, they tell everyone to sit down against the wall, back-to-back and sit and have deep meditation.”

Though Singhani is the president of Art of Living, he didn’t plan this event alone. He had help from senior Rebekah Cordell, the group’s treasurer. Cordell said she has always enjoyed doing yoga, so it was exciting for her to get involved in an event like this.

“Yoga’s always been a passion of mine, so the idea of a Yoga Remix party really excited me and [Singhani and I] just went from there,” Cordell said.

Cordell worked closely with Singhani to help make the event happen by doing the marketing and advertising for the event.

“I’m active in the yoga community, so I put the word out to the different yoga studios,” Cordell said. “I also helped [Singhani] with the budget and helped figure out the expenses, what to cut and what was necessary to make the event run.”

Columbia University was the first college to launch the Yoga Remix on Feb. 15, but it was unaffiliated with the Remix in New York City. There was also a Remix in Montreal on March 1.

Zoe LePage, president of the Art of Living club at Columbia University, was put in touch with Singhani through Butterthief lead singer Manish Tandon. LePage said she thinks it’s important that the Remix is expanding to other colleges in the state.

“This is not just an isolated party,” LePage said. “I think this is really starting a movement and showing students that you can have fun and you don’t need to be drunk to do so.”

Cordell said this event was important, because she wanted everyone who attended to be able to relax from the pressures of midterms.

“It’s come to be an event that students will be able to come to and relax a little bit, it’s in the middle of midterms week, so that’s kind of a cool time for it,” Cordell said. “It’s an outlet to dance and appreciate yoga, and I think it’s a great combination of music and yoga and a social setting.”