Bringers of the Rain

The march brings rain to a drought stricken area

I can’t ever say enough about how incredible my first day was. It was raining all day, and the poor weather really tested me, but I’m proud to say I walked every step and I slept in my tent at the end of the day. Some marchers hitched rides and stayed elsewhere for the night — some in a dance studio with hot showers, others in a hotel if they could afford it — and I certainly didn’t blame them. It was a rough day and I was tempted to follow suit. But, I figured I signed up for all sorts of weather and I’m determined to stick it through, thick and thin. One of my goals while being on the march is to become closer to nature and embrace simple living, and despite getting a little cold in the middle of the night I don’t regret my decision to stay outside.

Despite the beautiful sunny morning on the 24th — my first official day — when Carol, my Taos host, and I left for the Taos visitor’s center it started to rain, and as I unloaded my things into one of our support vehicles at the center it started to hail! The marchers were just arriving when Carol and I got there, and we took shelter in the center for a while and let the hail pass. Before we set out for the local park, a Buddhist monk, Reverend Yusin Yamato, who has walked across the country three times carrying a prayer of peace, blessed all of us. He proceeded to walk with us the whole way beating a drum. 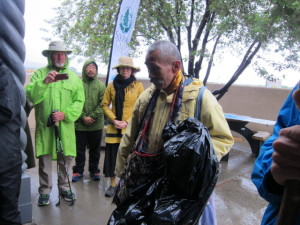 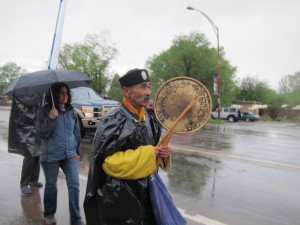 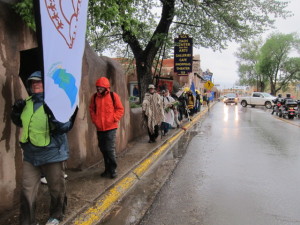 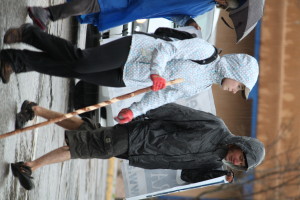 Yesterday also happened to be a global day of action against Monsanto and genetically modified organisms, and the local demonstrators for that movement joined us in our walk. Some were dressed up as bees and corn. Most of the corn produced in the U.S. is genetically modified, and our precious bees are dying off from pesticides. 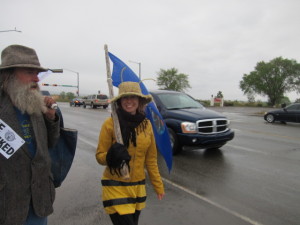 A Monsanto protestor dressed as a bee walking with us

We walked along a main road and lots of people honked at us. It was only two or three miles, but I was so energized that my body didn’t seem to feel any of it.

Everyone was really excited to see me. They had all seen my picture and followed along with my fundraising progress and they knew exactly who I was. The marchers have all been so kind and generous this first day and I’ve been doing my best to return it. Right now our numbers are around 35.

When we reached the park we were blessed by Lieutenant Governor Lawrence Lujan of the local Taos Native American pueblo, which is apparently very rare! A Native American woman from the Diné (Navaho) tribe, Patricia, also known as Woman Stands Shining, spoke next. She told us how people on pilgrimage journeys always bring rain with them. She said we are pilgrims, and that our walk is a prayer, so it’s no surprise we brought the rain. While it sucked walking in the weather, I wasn’t upset about it because I knew how much this drought-stricken area needed it. Being wet and cold was a small price to pay. 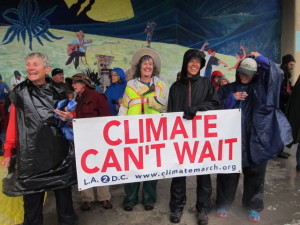 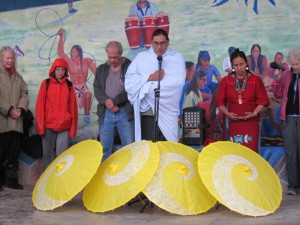 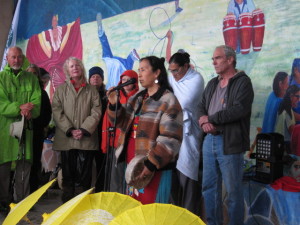 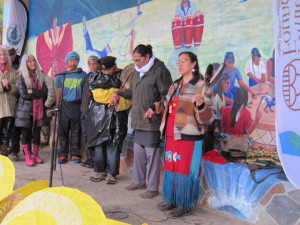 At the conclusion of the gathering I walked with a handful of others to the Buddhist ashram we are staying at for the weekend. The ashram, or temple, is gorgeous inside and out. There are gardens and statues and the building itself is traditional pueblo style. I can’t describe it well enough with my words, so I have a walk-through video of the temple for you to see for yourself.

After I set up my tent and moved my things out of the vehicle, I went in for dinner — Indian style soup, rice, and cornbread — it was the perfect meal after a long day in the cold. 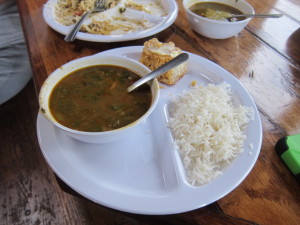 We were expecting a rainstorm last night, so I prepared and put everything I wouldn’t need indoors and stashed everything else in my waterproof bag. This morning I was fortunate to wake up dry. Many of the people who didn’t sleep in tents last night had to do so because all of their equipment was soaked. When it was dropped off at the temple earlier in the day it wasn’t covered properly. I was one of the few who was lucky enough to have dry equipment.

After I was all prepared for the night, I went into the temple’s prayer room and joined in on a few chants. A hand drum, tambourine, and melodeon were played. The chants were beautiful, as was the prayer room. It took me a while to relax, but when I closed my eyes and focused on the music I could feel it swirling all around me and it brought me great peace and actually helped with some of my back pain. 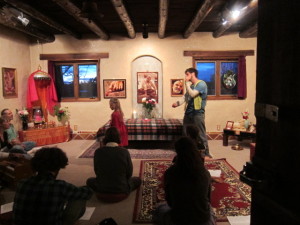 Benjamin, a marcher, dancing with a young girl in the prayer room 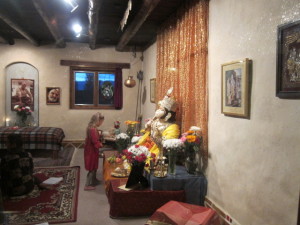 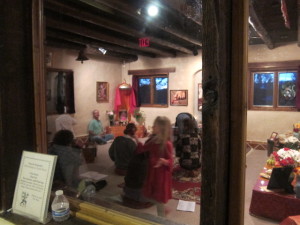 I’m glad to be staying here at the temple in Taos for another day. This town is lovely and the temple is such a peaceful, rejuvenating place. I am not eager to move on, yet I am so excited to see what comes next.