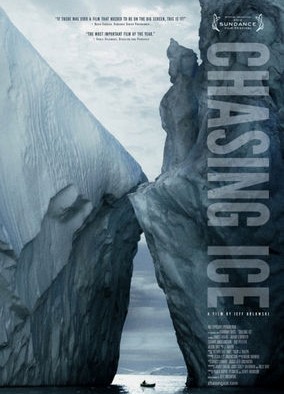 In case you haven’t heard, “Chasing Ice” is the next big thing in environmental film.

The documentary follows James Balog in his quest to photograph and document the changing glacial landscape in the arctic due to climate change. Balog is the founder of Extreme Ice Survey, a long-term project founded in 2007 with goals similar to the movie.

If you remember the glacier photographs from Al Gore’s presentation in “An Inconvenient Truth,” this movie has the same jarring visual impact, but on an exponentially greater scale. In the trailer, Balog says that the project’s initial aim was to put out 25 cameras and take shots every hour for three years.

The filmmakers – who include the award winning producer behind “The Cove” – recently released a chilling clip from the movie. The video shows 7.4 cubic kilometers of ice calving off a glacier in Greenland – the largest such event ever recorded on film. To put its size in perspective, said Balog, imagine “Manhattan breaking apart in front of your eyes.”

The movie is showing in select theaters, and you can catch it at the Cinemapolis beginning December 21.