Remember that time, Thursday night at the RNC, when Clint Eastwood yelled at an empty chair for ten minutes before introducing the Republican nominee for president? Ah, we were so young.

Don’t fret dear reader, because the Internet machine has retaliated to Eastwood’s tirade at an imaginary President Obama with incredible speed and alacrity. First began a meme called “Eastwooding,” where one takes a photo of themselves shouting at an empty chair. It’s like planking, but topical.

Like your satire a bit more, well, satirical? That’s fine, because @InvisibleObama — created almost immediately after Eastwood’s speech concluded, if not during— tweets from the perspective of, you know, Invisible Obama. By 10 PM Pacific Standard time, the account had over 30,000 followers.

Oh, but the best response of all? A tweet from Obama himself: 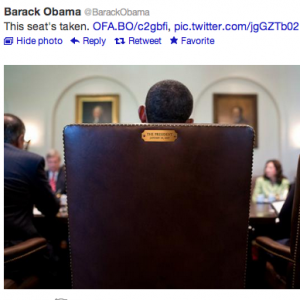