The Smell of Teen Spirit

I blame music for a lot of things in my life, but I never really made the connection to sex. I mean sure there’s “baby-making music” and all that good stuff (R.I.P. Barry White), but I never really thought about how music influences sexual behavior. Luckily, someone else was wondering.

Turns out there’s this dating website called Tastebuds that matches people who have similar musical tastes. This seems like a nifty little idea to me, I’d be interested to hear some of the success stories.

Apparently someone wanted to go a little deeper into their users’ sex lives with a poll that asked just how far they’d go on a first date. Over 400 users responded and after crunching the numbers from musical tastes and responses, Tastebuds revealed the biggest prudes in the world are…..Coldplay fans!

Odds are if you’re a Coldplay fan, you’re in no hurry to jump into the sack. This may be caused by the miniature Chris Martin on your shoulder. What would Chris do? Probably cuddle. On the other hand, Nirvana fans seek to avenge Kurt Cobain’s untimely death with their sexual conquests.

Want to see where you fall? Check out the graphic below. We have charts on this blog! Blinding you with science! 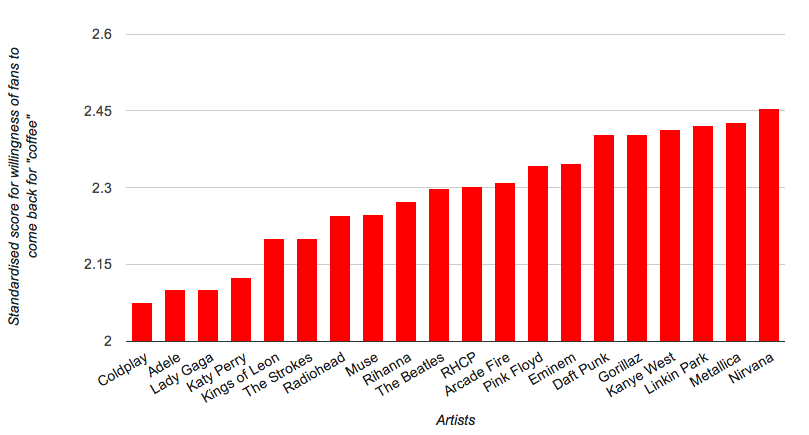