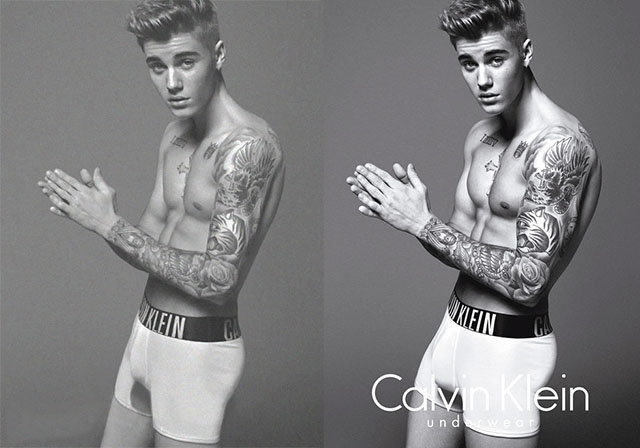 Image from http://petapixel.com/2015/01/09/unretouched-photo-justin-biebers-calvin-klein-shoot-reveals-photoshop-enhancements/
Before and After Photoshop
By Angel L. Zayas
Published: January 28, 2015

Upon scrolling through my Twitter feed this morning, as I do every day, probably seven or eight times a day, I noticed that Justin Bieber was being talked about a lot. Typically, if I see something about the Biebs, I will keep scrolling, because he probably did something downright obnoxious again. (Yes, I’m talking about peeing in mop buckets and egging people’s houses.) However, today, for some wild reason, I decided to make an exception.

I read a few tweets and came to the quick conclusion that the recent Calvin Klein ad featuring Justin was photoshopped. So, being the curious little bug that I am, I went to Google and decided to look a little further. BreatheHeavy.com, a website dedicated to pop musicians and the gossip that surrounds them, posted a GIF set showing the comparison between the ad and the “actual” Justin. From what I can tell, it looks very believable. Or should I say Belieb-able. (Okay, I’ll go to timeout.) But what wowed me the most is that someone on the Calvin Klein ad team was actually given the task of making Justin’s abs more prominent and his… member… seem bigger. Talk about a dream job. (Gag!)

More importantly though, this made me think about something else. Why would Justin Bieber agree to release edited pictures of himself? I mean, he’s an attractive enough guy and sings like an angel. It’s not like he has no chance of finding a girlfriend. I mean, can we talk about the pictures of him and Selena Gomez on his Instagram that randomly appear from time to time? He’s even been reported to be hooking up with the sixty years old former supermodel Christie Brinkley. (Get me a bucket!) And if worse comes to worse, he can always visit that escort in Brazil again, who filmed him while he slept. (Too soon?)

In actuality, this isn’t about Justin Bieber at all. This is about an issue that women have faced for years. Body image expectations. This is one of the hardest issues affecting women and young girls all over the world. Whether the expectation comes from the celebrities and supermodels on the covers of magazines like People and Cosmopolitan or even the Barbie dolls that little girls, like my niece, play with, societal expectations are unrealistic and problematic.

I am a firm believer that people should be allowed to do what they want with their bodies. One of my favorite quotes is by LGBT YouTuber and Australian musician, Troye Sivan, and he says, “And as long as you are healthy and happy, (expletive) what anybody else says.” If you want to eat that second slice of cake or even the whole cake, eat it. Enjoy it. Love it. And hopefully, share with me.

However, we have to remember that this is not solely a female issue. This is a people issue. Expectations and insecurities exist in male society. Don’t get me wrong. I am not saying that it is any more important for a certain party than another, and I understand the repression of women throughout the years and that it persists even today. But I do want to highlight similarities between body expectations in women and men.

Just like the supermodels and celebrities that women are compared against, the same exists for men. Often times, men like Channing Tatum and Zac Efron are put at the top of the expectation totem pole and, for those of us who don’t have a six-pack and big biceps, we are simply inferior.

The same goes for the expectations of young boys. If the idea of being surrounded by superheroes and knights isn’t enough, even Barbie’s boyfriend Ken is the “ideal guy”. Boys may not play with Ken dolls, unless they’re into that sort of thing, but the expectation is, in fact, still there. 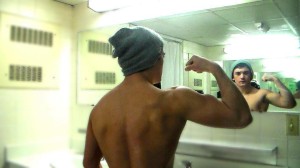 Furthermore, it is becoming more and more prevalent in today’s society for men to develop an Adonis Complex, or simply body dysmorphia. If you haven’t heard about it, this is a form of Obsessive Compulsive Disorder and can make a person believe that they are weak or rather “too small”. Often times, it is exacerbated by the gender roles that society continues to cling to, despite many recent strides in the last few years to break down the system. Magazines like Men’s Health glamorize the image of having a buff, almost superhuman looking body and, though probably unintentional, perpetuates unrealistic body expectations and the male stereotype.

I don’t believe Justin Bieber cares much about whether his photos were photoshopped. He got the paycheck and the publicity. That is all that matters. However, I believe that we need to take into consideration the idea that body image is an issue that affects everyone. Not just women. Not just men. Everyone. And the reason that it is overshadowed as a male issue is because of the lack of expression from the party.

Many men tend to keep things repressed because of the societal frowny face around men having feelings and insecurities. Men are expected to be men. Be strong. However, more and more, I see that this is not only unhealthy but, also, ridiculous. People are people, regardless of gender. Let’s start looking at them like that.