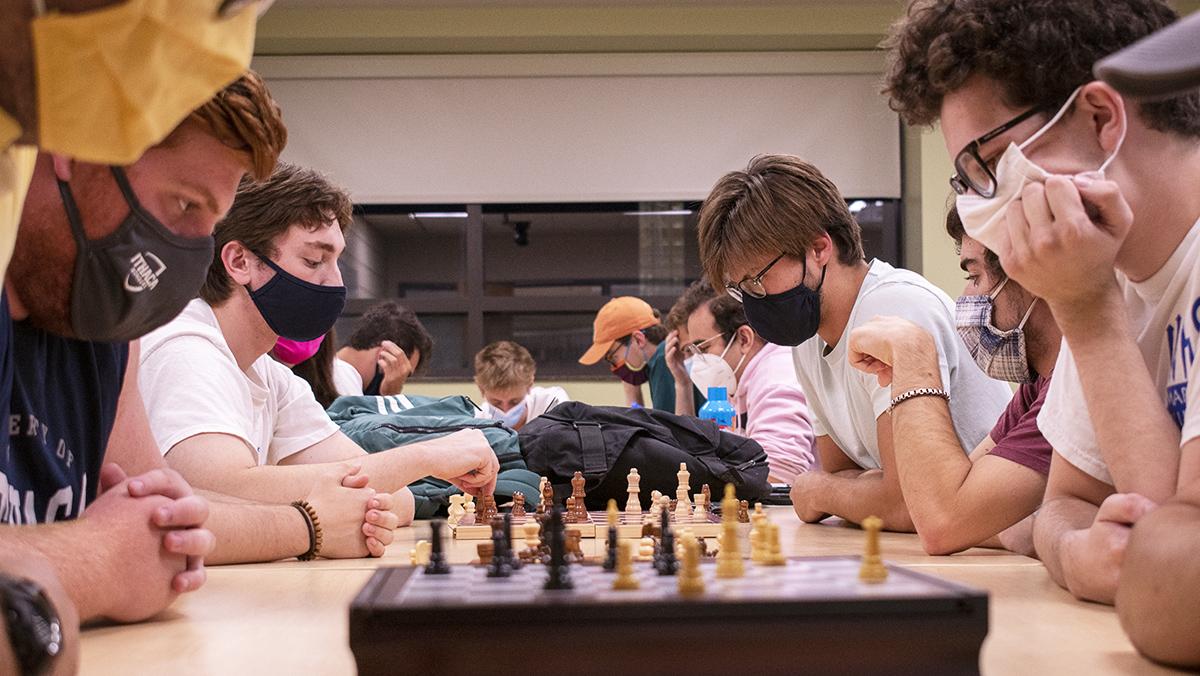 Nolan Saunders/The Ithacan
The IC Chess Club is looking to become an established, bona fide club for all players regardless of experience.
By Elijah de Castro — Assistant Life and Culture Editor
Published: September 15, 2021

Using the trackpad on his laptop to move his knight to C3, senior Don Therkildsen completes the Sicilian Defense. Sophomore Thomas Zieger exchanges a few words with Therkildsen over Zoom before making his move in return. On this Tuesday night, sometime in post-March 2020, a pandemic is raging on outside, leaving the Ithaca College Chess Club to continue the game by using the modern chess player’s pandemic clutch: Chess.com.

The college’s Chess Club was formed in early 2020, right before the COVID-19 pandemic confined it to a virtual setting. Now that the college is fully open, the Chess Club is looking to transform itself into a centralized, established organization for everyone, from the finest of the college’s chess players to total newcomers. The club will meet every Tuesday from 7:30 to 8:30 p.m. in Williams Hall, room 222. Therkildsen, the Chess Club president said the first meeting was Sept. 7 and over 20 people attended, many of whom were newcomers. He said he was surprised by the turnout and is happy to be leading this transformational effort.

“My main ambition, which I’ve already talked to my officers about, is to make this chess club Ithaca’s official, bona fide Chess Club,” Therkildsen said. “We are going to try and increase membership permanently and make us more competitive. We also have a relaxed environment — if you just want to show up on Tuesday and play a game of chess and learn a few lessons, you’re more than welcome to do so.”

Therkildsen said that during the COVID-19 pandemic, the Chess Club had trouble expanding, because many students either did not know that the Chess Club was meeting virtually or were not interested in playing chess online. Junior Connor Watson, Chess Club secretary, said that being in a physical space will increase attraction to the club.

“It will be a lot different this year now that we’re in person,” Watson said via email. “We’re excited to be together in the same space and hope it will allow the club to blossom.”

Zieger, the Chess Club treasurer, said that while chess is competitive by nature, attending tournaments and facing off against other clubs like Cornell University’s Chess Club is not the immediate priority of the Ithaca College Chess Club. Zieger said that building a friendly and conversational space for all players is what will come first.

“Cornell has a Chess Club and we’re considering maybe talking to them about doing events with them sometime,” Zieger said. “It would be nice to reach out to the greater Ithaca community … but competition has some serious air to it so it’s not something that’s like an immediate goal.”

Junior Wren Perchlik is a new member of Chess Club, but is a long time fan of the game. Perchlik said he thinks chess is a great time both for those who are avid chess players and novices.

“My pitch to play chess would probably be it’s really relaxing and a good way to just kind of sit and hang out with someone for a decent amount of time,” Perchlik said. “There’s a lot of thinking involved, and you have to use your reasoning capacities. But you can also just talk to the person and other people who might be watching. So it’s social but it’s also competitive and, in the way I play, it’s generally pretty chill, so it’s a pretty fun time.”

Zieger said part of the fun of chess is the aspect of getting to know one’s opponent through conversation.

“My chess philosophy is not to win or to have the best strategy,” Zieger said. “I don’t memorize all these sorts of codes and rules, but I do like to split the brain between this game that I’m working on winning and also the conversation with the person across the board. I think it’s nice to be multitasking where the brain isn’t focusing too hard on one thing.”

Freshman Daveigh Robbins said she is one of the only women in the Chess Club, but she said the club does not feel like it is exclusive.

“I kind of wish there were more girls there,” Robbins said. “I think I only saw one girl, but it was fun … It didn’t feel like a toxic male environment.”

Therkildsen said he is committed to having the Chess Club be a welcoming environment for all. While Therkildsen and the other officers of the club have lifetime ties to the game, the Chess Club is hoping to emphasize bringing in new players.

“No matter what your expertise level is, you could not have played a day of chess in your life and we will teach you,” Therkildsen said. “We could try to make you an expert by the end of the semester.”

This article was done with additional reporting from Sydney Brumfield.