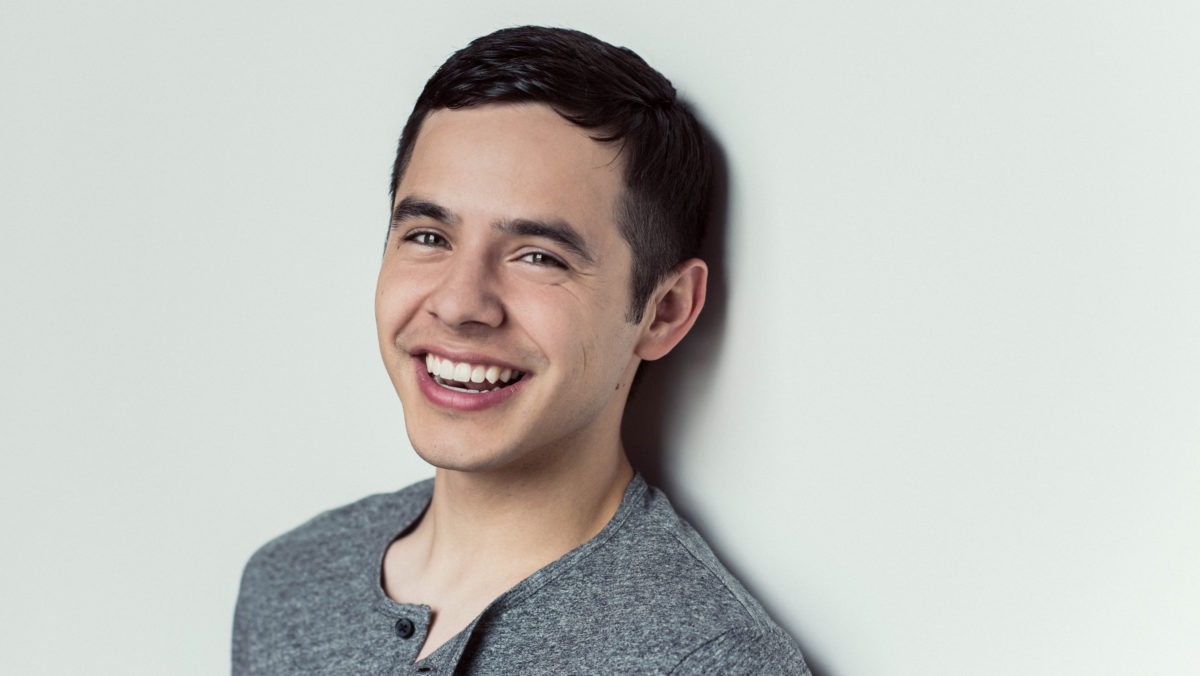 David Archuleta appeared on "American Idol" in 2008 and became known for his hit single "Crush" soon after. He is performing March 25 at The Haunt in Ithaca.
By Olivia Riggio
Published: March 21, 2019

David Archuleta was just 16 when Americans fell in love with his smooth voice, fresh face and endearing disposition as the runner-up on the seventh season of “American Idol” in 2008. Soon after Archuleta’s time on the television show, he released his single “Crush,” which reached No. 2 on the Billboard Hot 100 chart. Eleven years later, Archuleta has 10 — soon to be 11 — albums under his belt, though most of his latest work remains unknown in comparison to “Crush.”

Some of Archuleta’s earliest fans were tweens who watched him on “American Idol” and voted for him on their clunky landlines or, if they were lucky, their pink Motorola Razrs. Following his time on the reality show, Archuleta also appeared on the popular Disney Channel and Nickelodeon shows “Hannah Montana” and “iCarly.” These fans are now college-aged and in their early 20s, and they now have the opportunity to relive their tween dreams when Archuleta comes to Ithaca to perform at The Haunt on March 25 while on his nationwide tour.

Archuleta isn’t the only musician taking advantage of fans’ wistfulness for his earliest hits. The Jonas Brothers, who were Disney heartthrobs in the early 2000s, just reunited and released their single, “Sucker.” The ’90s boy bands New Kids on the Block and the Backstreet Boys are also all back in the spotlight.

Millennials seem eager to relive their childhoods through the music that guided them through their awkward years. Leah Taylor works as the talent buyer for DSP Shows, the local agency that booked Archuleta at The Haunt. She said she is noticing a trend in young adults rediscovering music from their childhoods both locally and nationally. 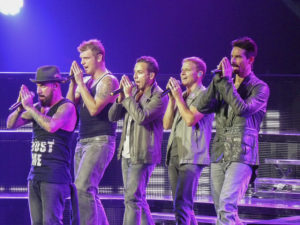 Backstreet Boys made its way back into the spotlight with new album “DNA.” The group is now on its world tour for the new album. Backstreet Boys was in peak popularity between the late ’90s and early 2000s.

“We’re really seeing it everywhere. You know, the Spice Girls are doing a world tour,” she said. “I had some friends go to the *NSYNC and Backstreet Boys tour last year. … We’re even noticing it at The Haunt. … We did a ’90s event that Cayuga Radio Group promoted and that sold out way in advance. It was a DJ playing songs from the ’90s, and people love that. We also did an emo night, which we played a lot of early 2000s music … and that did really well. I definitely think there’s a demand for that right now. People just want to have fun and sing along to songs they grew up with, and they want to be superfans for a night.”

Ithaca College senior Sophie Johnson was one of these former superfans — she bought several copies of each of Archuleta’s albums, posted on his online fan pages as an elementary and middle schooler and met him twice at his shows when she was a tween. She even dressed up as him for Halloween when she was in sixth grade. She said she remembers being on her home phone in a four-way call with her friends the night of the seventh season finale of “American Idol” and abruptly hanging up in shock when Ryan Seacrest announced that David Cook — not Archuleta — had won.

“We would burn his CDs for our friends and hand them out to people,” Johnson said. “We watched him every single week on ‘American Idol,’ voted for him a ridiculous amount and were absolutely devastated when he lost. … I was definitely known in my grade of like 300 people for being obsessed with him.”

Though Johnson said her music tastes have changed since she was 10 years old, she is excited to relive her elementary and middle school days and attend Archuleta’s show in Ithaca.

“He used to mean the whole world to me when I was younger,” she said. “I feel like fifth grade me and middle school me would have been so disappointed in myself if I didn’t go.”

Archuleta was a star who appeared on national TV and toured around the world as a teenager but said he enjoys playing small shows because he gets to connect more deeply with and fully take in his audience. Taylor said she thinks many artists who have played theaters and stadiums prefer small venues because they provide them with a certain amount of nostalgia as well.

“I think that for some, they like to go back to how it was when they were first starting out,” she said. “Maybe playing smaller rooms is just more fun for them.”

Archuleta’s publicist Ken Phillips worked with the Jonas Brothers even before Disney picked them up and has also aided other “American Idol” stars like Cook, who won the show’s seventh season, and Lee DeWyze, who appeared on the ninth. He said some artists grow frustrated when the public pays more attention to their old hits than their new creations, but that the enduring popularity of their first hits comes with the territory of stardom.

“I think every artist is always going to keep trying to create and make new music, so of course they want people to listen to their latest creation, but they understand,” he said.

Archuleta said he is grateful for his fans’ support and enjoys connecting with them, even if on a nostalgic level.

“I don’t really feel pigeonholed by it because I feel like I can do as I like,” Archuleta said. “And I think it’s been nice because I think it’s cool to have that nostalgia behind it. I still sing the songs that bring people that nostalgia. You know, ‘Crush,’ specifically. … They’ve always just been really open to what I have to offer now, and it’s fun that they still remember ‘American Idol,’ and they remember ‘Hannah Montana’ and ‘iCarly.’”

Archuleta is more amused than offended by people vaguely remembering him for “Crush” or for his guest roles on Disney and Nickelodeon shows.

Phillips said the singing competition era on TV in the 2000s resonated with people who got to vote for who they loved and watch people tell their stories. “American Idol” has between seven and nine million viewers now, but in its heyday, when Archuleta competed, it had about 30 million.

“It was a phenomenon,” Phillips said.

This phenomenon is something people want to relive.

“These fans have a connection, … so it’s sort of like looking in a photo album and reliving your memories,” Phillips said.

For some, these memories can be both invigorating and comforting. Sophomore Alexis Bingham is a fan of nostalgic music and enjoys listening to the Jonas Brothers’ and Demi Lovato’s songs from their Disney days. A few weeks ago, she and her friends went to see Drake Bell, the star of the Nickelodeon sitcom “Drake and Josh,” perform.

“I guess it’s just comfortable and kind of comforting because it’s just something I’ve had in my life for a really long time,” she said. “It resonates with me kind of because I just grew up listening to it. So, having the connection when they come up with new stuff is really nice too.”

Archuleta and other artists who came into the limelight as youngsters have grown up alongside their fans. Oftentimes, this transition into adulthood involves a loss of the innocence these child stars were loved for. Senior Holly Stoker and her family were fans of both the Jonas Brothers and Archuleta when they first emerged. Stoker grew up Mormon, as did Archuleta, and she said girls in her religious community idolized him.

“For the Mormon community, every young girl is obsessed with David Archuleta because he’s also a Mormon and also a cute young man,” she said.

The Jonas Brothers perform at the “Kids Inaugural: We Are the Future” concert at the Verizon Center in downtown Washington, D.C., Jan. 19, 2009. Michelle Obama, wife of President-elect Barack Obama, along with daughters Malia and Sasha, were in attendance.

Stoker and her mother attended “American Idol” live concerts when they came through her home state of New Jersey and would wait at the stage door for autographs from the stars. Her family also adored the Jonas Brothers, who grew up in New Jersey. These stars’ purity (the Jonas Brothers literally wore purity rings) and naivete drew a lot of young fans — and their approving parents — in. These musicians help now-adult fans remember their own childhoods.

“I think it’s also that veil of innocence, … especially with David Archuleta and the Jonas Brothers with their purity rings,” Stoker said. “That is a big draw for a lot of people, including myself.”

Naturally, as time passes, these artists also change their musical styles to reflect changing times and their improving skills. Archuleta said he only had a hand in writing two of the songs on his first album, but now he co-writes all of his songs. He said he values being able to share his story with listeners and likes to treat shows as intimate, storytelling times.

Archuleta’s current tour is in support of his 2017 album, “Postcards in the Sky.” He is also set to release a new album this year and said he may perform some new songs at his Ithaca show. Johnson said that she is mainly excited to hear Archuleta’s old hits, but that she is interested to hear his more current work. She said for her, it’s Archuleta’s old music that has the most sentimental value.

“Music really has a way to take you back to certain moments in time when you were listening to it and when it was important to you, and it’s just something that you’ll never forget,” she said. “It definitely does give you feelings that you’re there again.”

Archuleta said he hopes both his new and old music will connect with listeners.

“I would love to re-engage with people, reconnect with them,” Archuleta said. “And if this new album that I’m doing this year can connect with people, even at a nostalgic level, that’d be awesome.”