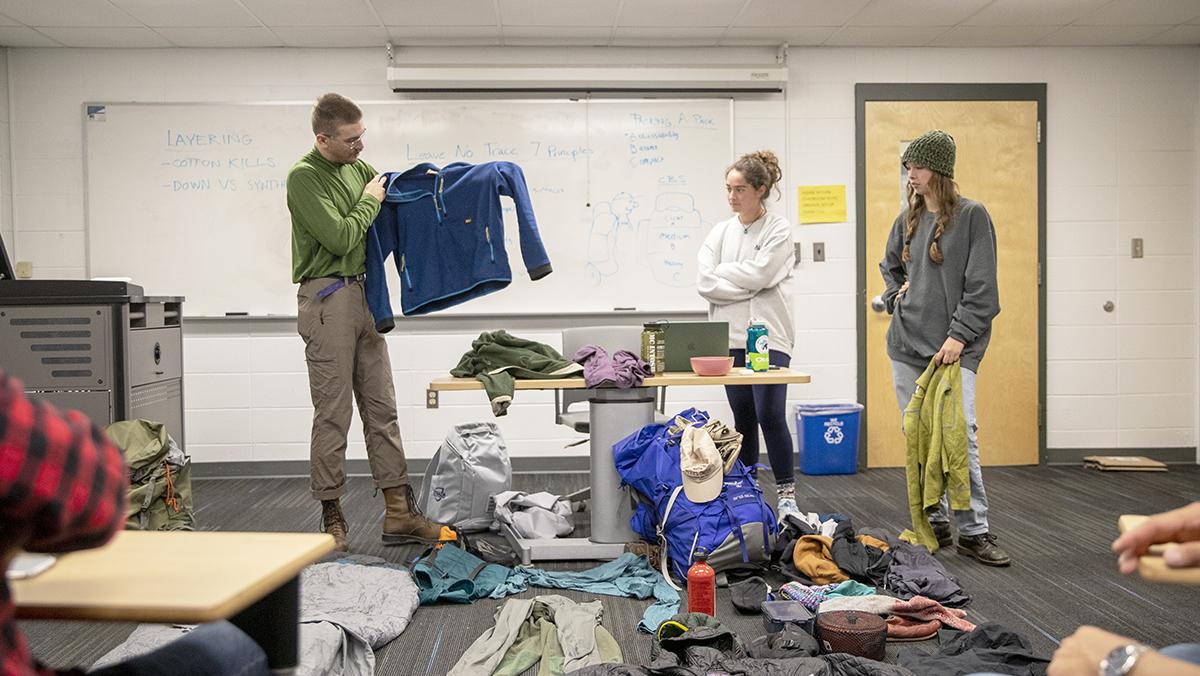 Late nights, heavy workloads and mounting deadlines leave many students feeling like a hamster on a wheel, desperate to slip away from the pressures of school. Nature being one of the best remedies for stress inspired the Outing Club to be that bridge for Ithaca College students looking to escape the confines of campus to decompress in nature.

The Outing Club was established in 2018 by students with the objective of providing access for all students interested in the outdoors regardless of previous experience. The club’s pledge to accessibility has provided students previously unable to reach vast wilderness because of geographic or financial barriers a chance to experience the beauty of unrefined nature and the joy of participating in outdoor activities.

Senior Ellie Swanson, president of the Outing Club, is originally from Washington and grew up surrounded by the greenery of nature. She joined the club her first year at the college with the desire to be involved with something familiar and becoming part of a connected community.

“Anybody who wants to join is welcome to join,” Swanson said. “You don’t need any experience. … We’ve got people who have never been on a hike to people who have done countless backpacking trips.” 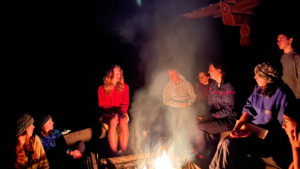 Members of the Ithaca College Outing Club gather around a campfire. The club was established with the goal of providing access for students interested in the outdoors regardless of previous experience. Courtesy of Madelyn Salvante

Senior Morgan Kingsley, a member of the club, said she wants to reassure students that despite how daunting it can seem to participate in outdoor activities, the club is for people of all shapes, sizes and physical activity levels.

“When we think of hikers, it’s like these people who are super strong, and they’ve got these incredible lungs and legs,” Kingsley said. “But there’s also people [in the club] who haven’t gotten to be in nature, and [for them], it’s a form of meditation [or] a form of exercise. For me, it’s both.”

For Swanson, she said it is important students recognize the club’s dedication to inclusivity and emphasis on community.

“Our club is a place where people can gather and meet new people, especially for first-year students but also [so that] upperclassmen who maybe had friends but maybe grew apart can build new connections,” Swanson said.

The activities offered by the club are designed to give students the opportunity to build these connections. Every Monday from 4 to 6 p.m., the Outing Club hosts their Weekly Hangs in the Ithaca Natural Lands, where students come to chill in hammocks and relax on blankets while basking in nature and chatting with one another. On Wednesdays, the club runs a rock climbing event from 7 to 9 p.m. in the Fitness Center, which Swanson said always produces a large turnout. Bigger events include hiking in Robert H. Treman State Park, camping trips, a yearly backpacking trip to the Adirondacks and biannual watersports on Cayuga Lake.

The accessibility of planned activities and trips are guaranteed by providing transportation and any gear for students, like sleeping bags, tents and snowshoes, free of charge.

A guiding principle on every trip is the concept of environmental stewardship, which is the idea that humans are responsible for taking care of and maintaining the quality of the environment while enjoying its wide variety of beauties and benefits.

Specifically, the club follows Leave No Trace, a policy consisting of seven principles of how to conduct oneself in nature. The seven principles are: plan and prepare ahead; travel and camp on durable land; dispose of waste properly; leave what you find; minimize campfire impacts; respect wildlife; and be considerate of other visitors. 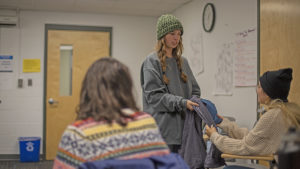 The club practices these guidelines by staying on marked trails to avoid impacting wildlife and being cognizant of their place within nature.

“We are not the owners of this world. … While we’re creating these great opportunities for people … it’s vitally important to put the earth first so that future generations can also have those experiences,” Swanson said.

These activities not only serve as space to meet others but as a place to learn skills for when students are ready to embark on their own adventures, Swanson said.

Along with acquiring skills, exposure to nature can improve a person’s mental and physical well-being by improving their attention, lowering stress, elevating mood and increasing empathy and cooperation, according to the American Psychological Association.

These scientifically proven benefits led to the invention of ecotherapy: the idea that humans have a deep connection to the environment and that mental health problems like anxiety and depression can be treated by immersing yourself in nature through physical outdoors activities like hiking, camping and outdoor meditation.

Sophomore Ben Newsome said the club’s atmosphere is mellow and non-competitive, the focus is not about comparing one’s abilities to others but about trying new activities and improving on your skills and experiencing the lure of nature.

Newsome said he found excursions with the Outing Club offered some reprieve from the pressures of school.

“I find that if I’m stressed with school or any other outside personal experiences, just going outside and being within nature just helps me put my mind at ease and get in touch with myself,” Newsome said.

Being out in nature has also prompted the realization in some students as to how disconnected humans are from our natural environment.

“[The world] has been around since the beginning and I feel like sometimes we forget that,” Kingsley said. “Sometimes you forget to honor the fact that trees are helping us breathe. I think if people are more aware of the earth as a place where we cohabitate with it, they become more empathetic and appreciate its beauty and its purpose.”

The Outing Club’s own purpose is not only to highlight the beauty of Ithaca, but to inspire students to see a different side of nature they may have never previously experienced.

Swanson also said they want the club to give students a sense of belonging and space to explore their own potential.

“The thing I get the most joy out of is [when,] after a camping trip, some participant comes up to me and I was like, ‘I’ve never never camped before and it was amazing, thank you so much for that experience,’” Swanson said.