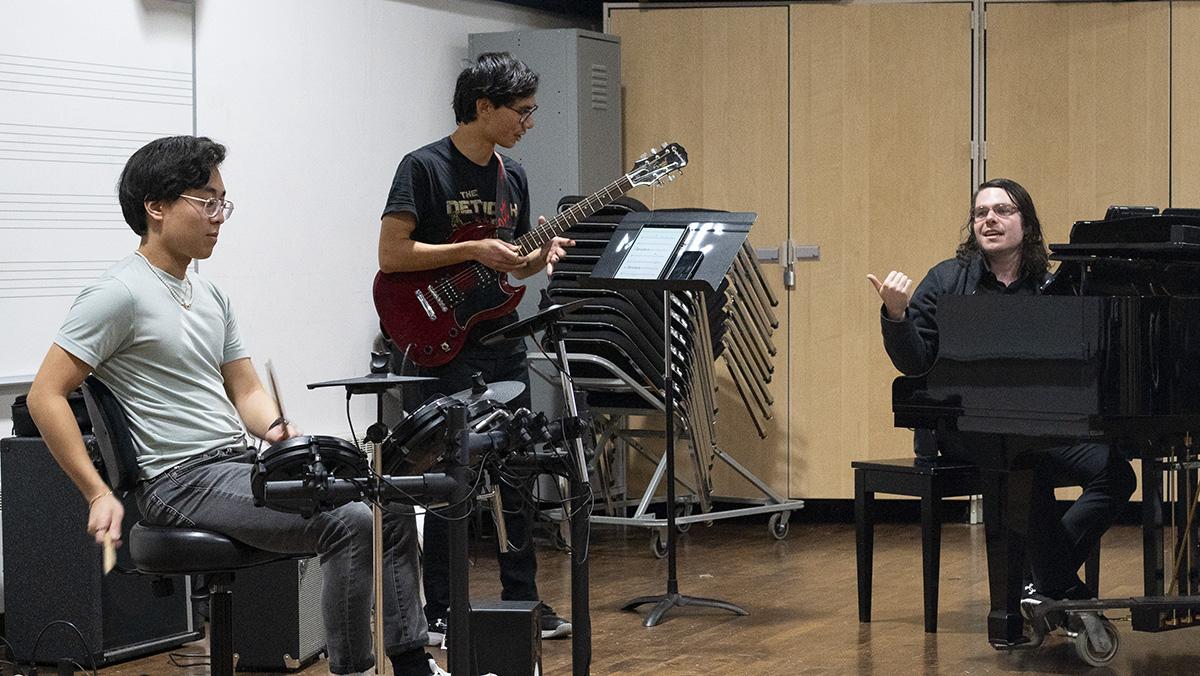 Port MacNam, a college rock band of three current and former Ithaca College students, plans to reunite for one last show Oct. 29. Formed during the 2021–22 academic year after meeting at the weekly Open Mic Nights, Port MacNam will play during the vocal recital of one of its members, senior Ben Macarell.

Port MacNam is composed of Macarell on bass and vocals; Cameron Narimanian ’22 on guitar, piano and vocals; and sophomore Yushi Portwood, who transferred to Purdue University in West Lafayette, Indiana, on drums. Their debut EP, called “Can’t Hold Back,” contains five rock tracks and was written and recorded throughout the 2021–22 academic year and the summer of 2022.

The group got its start in Fall 2021 through the weekly IC Open Mic Nights that occur in IC Square every Thursday from 8 to 10 p.m. Macarell and Narimanian formed the group after working on the executive board for IC Open Mic Night, which showcases musicians, comedians and performers at the college.

Narimanian said the band was formed to make IC Open Mic Night shows more interesting. He and Macarell started playing covers as a duo together at the end of the show.

“[Narimanian] was very much in the mindset of, like, ‘OK, let’s make the show good,’” Macarell said. “My whole thing was just like, ‘I just want to play with this guy.’”

After playing for a couple weeks, Narimanian and Macarell started hanging up flyers around campus looking for a drummer. These flyers eventually found their way to Portwood, who reached out and showed up to the next open mic night.

From that point on, the full trio was formed, and they decided on the name Port MacNam, which is a combination of their last names. After playing covers every week from the likes of The Ramones, a-ha and The Police, the band started working on original material in the same lane as the rock music they covered while playing at IC Open Mic Night.

“We demoed them all at [Portwood’s] house, where we would come Sunday afternoon at, like, 1 or 2 [p.m.] with an idea,” Narimanian said. “We spent, like, four, four or five weeks probably doing this every Sunday; we’d come with an idea, and then we’d leave with, like, the instrumental piece of a song.”

Port MacNam wrote all four original songs that landed on the EP during these sessions. These songs could broadly be described as rock, but touches of choral arranging and hip-hop also exist on this EP — reflecting the different musical backgrounds of the members. Macarell is a vocal major at Ithaca College, Portwood has been playing drums since he was in middle school, and Narimanian has been playing classical piano since he was 5 years old. This combination of backgrounds blend together, creating a collage often distinct to the college–rock sound. Portwood also started making hip-hop music during the COVID-19 pandemic.

“It all started off [with], like, instrumental stuff,” Portwood said. “And then I decided, you know, I’m not a singer, I can’t sing at all, but, you know, I can spit some bars, so I decided I’ll be a rapper.”

Portwood’s rapping is displayed on the second track, “Just Myself in the Sun,” which is an indie-rock/hip-hop fusion. “The Mysterious Old Man” showcases Narimanian’s piano balladry, “The Price That Love Can Pay” has driving pop-punk influence, and the closer “Can’t Hold Back” has some peppy, singer/songwriter elements in the verses that lead into more rock-like choruses.

Choosing the fifth song, which they decided would be a cover, took some deliberating according to Narimanian, who claimed the group spent more time debating than working on the songs.

“I think it got to one open mic where [Portwood] was just like, ‘let’s just do Bon Jovi’s “Living On a Prayer,”’” Macarell said. “And … the heavens opened up above me, and I saw the whole thing come together in my mind.”

The cover is a slower take on Bon Jovi’s hit song, turning the synth and guitar-driven rock song into a piano ballad with the addition of choir-like backing vocals from Macarell.

After the demos were put together, the band looked for a studio to record the EP. They decided to work with Chris Ploss, sound engineer and producer at Sunwood Recording. They recorded most of the EP in one day in mid April, and after it was fully recorded, mixed and mastered, the EP was released July 15.

According to Macarell, Port MacNam does not have any plans to continue as a band because they lost the convenience of attending the same college after Narimanian graduated and Portwood transferred. Macarell’s senior recital Oct. 29 will take place in Nabenhaur Hall in the James J. Whalen Center for Music. Port MacNam does not have any plans past then; this is their only gig lined up at the moment.

Port MacNam’s “Can’t Hold Back,” as well as the solo material from each band member, can be found on Apple Music and Spotify.