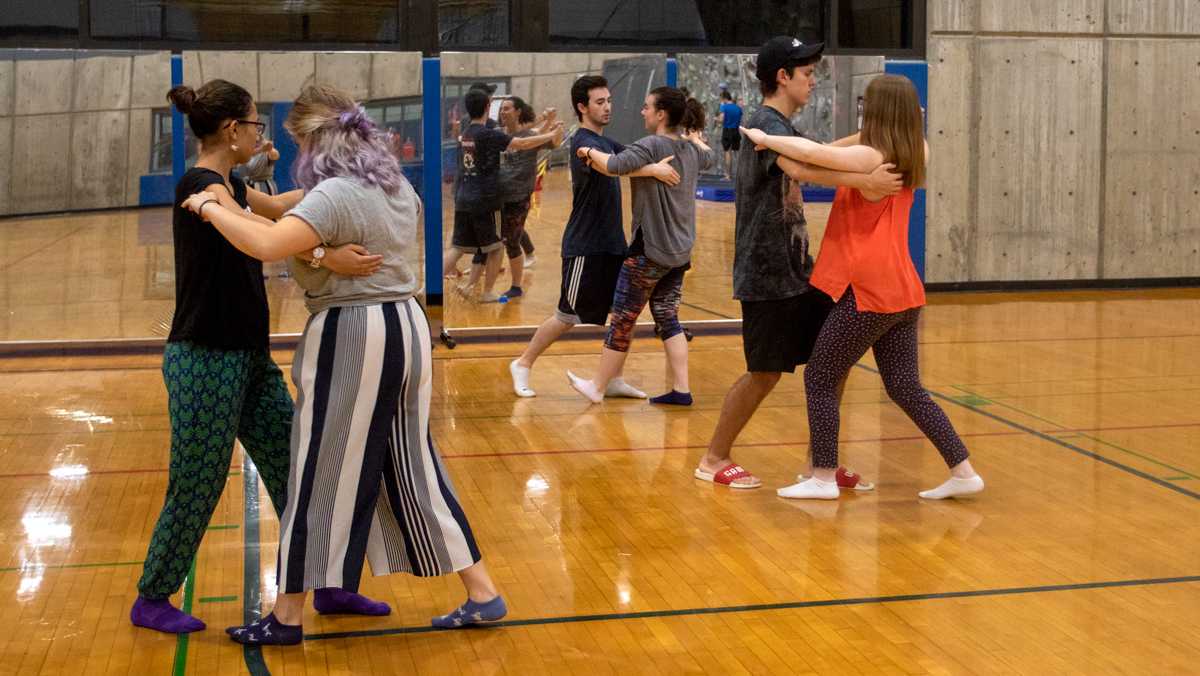 Six students stand in a semicircle, each person resting their arm against their neighbor’s shoulder, sporting a mix of classy heels, white socks, bare feet and one pair of knee-high striped yellow socks. They’re Ithaca College’s Ballroom Dance club, but based on their outfits, an onlooker may never associate their underwhelming everyday clothes with typical ballroom-style attire.

The students pair up, Ronan Hardiman’s “Capone” starts to play, and their feet start to move: Slow. Slow. Bring feet together. Quick, quick. Slow. Slow. Glide in. Slow. If the hard floors of the Wood Floor Gym in the Fitness Center faded away, an onlooker may believe they had been transported back to a time when everybody knew the steps to a foxtrot like a moth knows its way to a lamp.

Head to a practice for Ground Up Crew, the college’s only breakdancing club, and the atmosphere changes. During most practices, the members splinter into various groups where people can practice whatever moves they want, said sophomore Christine Chung, Ground Up Crew president. People may practice footwork, top rocking or power moves — the iconic move of spinning on one’s back on the floor to the rhythm of old-school hip-hop.

Pulse specializes in hip-hop dancing. Senior Pulse President Jaleel Green said the group spends most of its practices gearing up for choreographed performances.

IC Unbound Dance Company and IC Defy are the only two dance clubs on campus that do not specialize in a specific style of dance. Instead, each semester, choreographers offer routines in a variety of styles — from jazz to hip-hop to ballet to lyrical — and members audition to be a part of as many as five routines.

The most unexpected of the groups is IC Swing Dance Club, which despite their name, does a lot more than swing dancing. Celine Baumgartner, IC Swing Dance Club President, said a person can learn the East Coast Swing or a choreographed dance to “I Don’t Dance” from “High School Musical 2.” The style just depends on the practice. She said her priority is keeping people engaged and having fun, and sometimes that means playing tag or a game of Simon Says where she calls out swing moves.

“We dance to Shakira,” Hejl said. “‘Hips Don’t Lie’ is our go-to song. Anytime that’s on, you immediately stop what you’re doing, and you just go. It’s Shakira time.”

When it’s neither ballroom nor “Shakira time,” the group will sometimes hang out laughing or just watch the rock climbers speed climb in their shared gym space.

Pulse also finds time to loosen up in between performances — to welcome new members, at the end of every season’s first practice, the group circles up and freestyles.

“I think the funniest, weirdest thing we do is twerk freestyle circle at the end of the first practice with the new members,” Green said.

Senior Julianna Diamond, IC Swing Dance Club vice president, said the club’s atmosphere is laid back and allows the members to “go wild.” Every meeting begins with a Charleston Circle where members circle up and flail around as they please, she said. Afterward, members learn a new swing dance and have a free social dance time at the end where people can do whatever they want.

Occasionally, she said, the group does a dance called the ‘sea cucumber,’ created by former club president Brian Pulling ’15, in which somebody yells “sea cucumber,” and everyone stiffens and begins to spin around standing up.

While the swing club may spend its time stiffening up, Ground Up Crew finds ways to keep it loose. During many practices, the group will cipher — a dance move where members gather in a circle while one person jumps in the middle and shows off their moves. The group also has the traditional dance battles where people compete with each other. Chung said activities like these also improve members’ skills and confidence.

Ground Up Crew is low-commitment. There aren’t auditions, and people come and go as they please. What keeps Chung coming back is the self-expression she’s tapped into.

“I found my style when it comes to my flow and how I like to do things,” she said. “It’s a way for me to express myself, so I can kind of do whatever I want.”

Baumgartner also said she appreciates putting her own technique and style into swing. As a former ballerina, she said, she likes the freedom of the dance style.

Graduate student Christina Yuu has been a part of IC Unbound for nine semesters. Though she has gotten a lot of personal joy from IC Unbound, her favorite part is seeing everyone else grow.

“I’m like a proud mother or grandmother,” she said.

Sophomore Mikayla Heid, a member of both IC Unbound and IC Defy, said she’s found a supportive environment and family in each group.

“During our shows, we’re all in the wings just cheering for each other, probably louder than the audience,” she said. “And then, with Defy, it really is just a big family,” she said.

When Diamond joined her freshman year, dance didn’t just help her find a family, she said. It also gave her something fun to love.

“All you need are socks and a dream,” Diamond said.