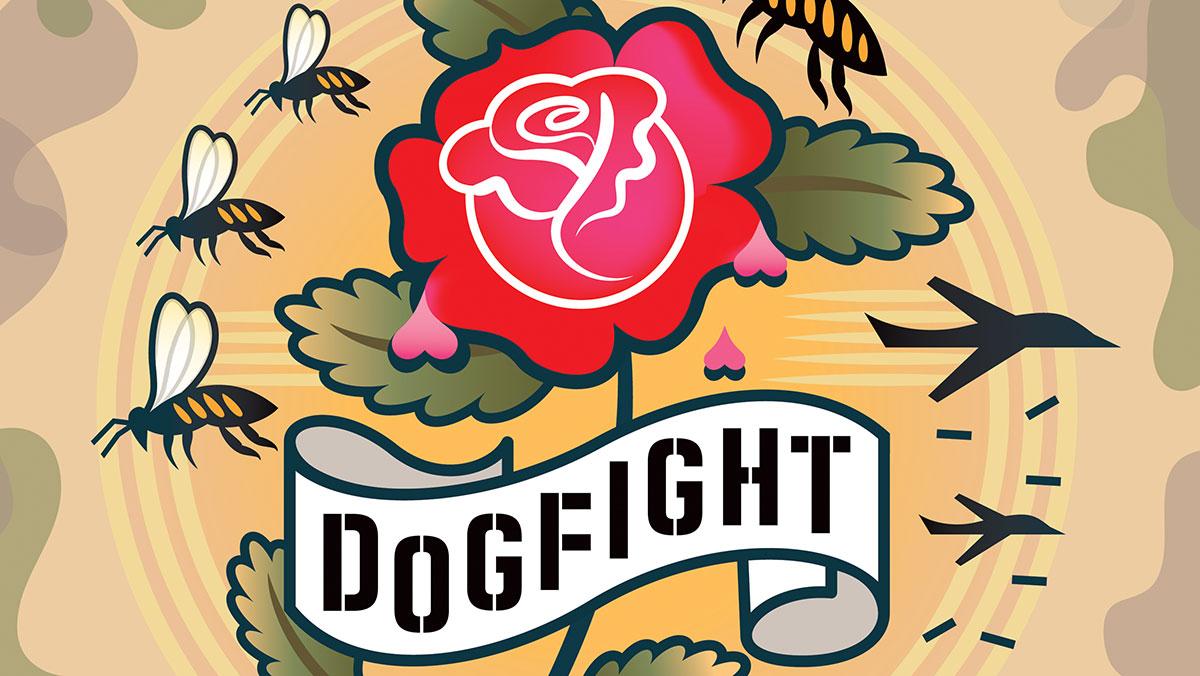 “Dogfight” is MainStage Theatre’s latest production and is directed by Wendy Dann. The musical is based on the 1991 film of the same name and is set in the late 1960s following the Vietnam War.
By Justin Henry — Staff Writer
Published: March 28, 2016

Set against the late-night scene of 1960’s San Francisco, a veteran’s memories from before fighting in the Vietnam War are explored in the Ithaca College Department of Theatre Arts’ Main Stage production of the musical “Dogfight.”

Beginning in 1967, “Dogfight” tells the story of a broken and disillusioned Marine named Eddie Birdlace returning from fighting in the Vietnam War after four years. Riding on a Greyhound bus, he recalls the night before he and his friends were shipped to Vietnam on Nov. 21, 1963, the eve of the assassination of President John F. Kennedy. During their last night in San Francisco, Eddie and his friends organize a “dogfight,” a contest in which they all compete to bring the ugliest date to a dance party. Eddie woos a shy and unexpecting waitress named Rose who reveals to him a kind of beauty that goes much deeper than the surface.

The show is directed by Wendy Dann, associate professor of theater arts, and is choreographed by Roy Lightner. The production will feature seniors Joshua Rivera as Eddie and Brianne Wylie as Rose.

Based on the 1991 movie of the same name, the show features a script by Peter Duchan and a Drama Desk Award–nominated score by Benj Pasek and Justin Paul. Accompanist and Musical Director Joel Gelpe said the score combines elements from 1960s music with contemporary musical theater motifs.

“Every once in a while, the composer will tell you what they’re going for in the song,” Gelpe said about the show’s sheet music. “It will give the title of two rock tunes and say, ‘This rock tune meets this rock tune.’”

Senior Rebecca Dwight, the show’s scenic designer, said the songs seem to convey a lighthearted message until they are seen in the context of the show and convey mixed feelings about the show’s central characters.

“I think what they do is they emphasize the fact that it is a musical that creates these characters who seem like the protagonists because of the upbeat music, but really they’re almost the antagonists,” she said. “I think it really makes you reconsider how things are done in this country and how things were done in this country, and it makes you question their views versus our views.”

Dwight said her original set will bring audiences to 22 different locations, employing an abstract design to portray the nature of Eddie’s memories.

“You can’t walk through San Francisco in our theater, so we decided to make it presentational rather than representational,” Dwight said. “It’s not about the physicality and the literalness. It’s about the themes the moments and the memory.”

Sophomore and cast member Maureen Edwards, said the play adds the most contemporary subject matter to the 2015–16 mainstage season and deals with the darkest issues.

“A lot of the shows we chose for this semester were very happy, overall — ‘A Chorus Line’ and ‘As You Like It,’ for example,” she said. “This show brings some harsher subject matter and a really human script.”

Edwards said while other productions didn’t delve as deeply into the full weight of the issues it addresses, such as the objectification of women and the horrors of war, this production strives to discuss them as authentically as it can.

“In watching Eddie’s journey from the night of the ‘dogfight’ through the war and finally home, we are able to watch him evolve from a surface-level shell of a human, to a fully fledged one, and it challenges us to do the same,” she said.

Edwards said she initially had difficulty connecting with the show because of some of its challenging themes and painful moments but that she grew to see the show as a platform for addressing some of society’s most important issues and confront viewers with their own humanity.

“People should come see ‘Dogfight’ because it will simultaneously make you question your values, break your heart, lift you up, and the entire time, you’ll be tapping your feet,” Edwards said.

“Dogfight” is directed by Wendy Dann with choreography by Roy Lightner. Tickets can be bought at the Dillingham Center box office or on http://ithaca.ticketforce.com. Performances will be at 8 p.m. March 29 and 31 and April 1–2 and 5–8; and at 2 p.m. April 3 and 9 in Clark Theatre. The Ithaca College Main Stage Theater’s website advises audiences that the performance contains mature language, sexual content, violence and images of war.