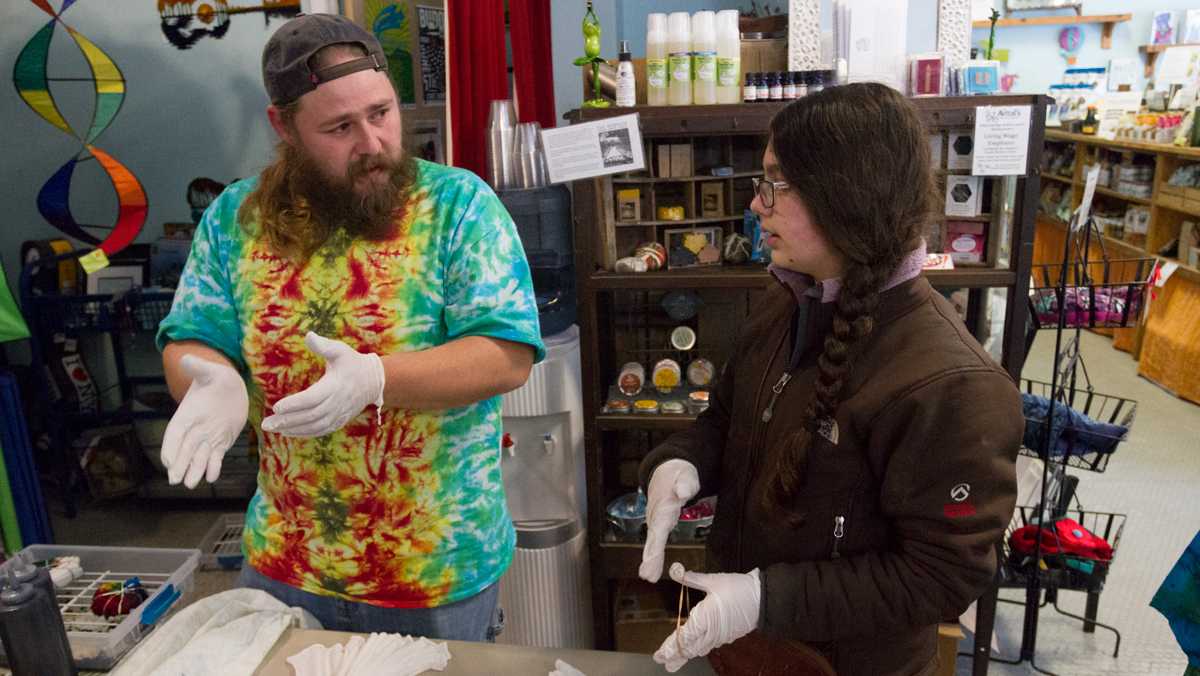 Some may say Ithaca’s livelihood comes solely from its large college scene, but the small city’s retailers are coming together for one week of pure Ithaca fashion.

“We wanted to try to create a week that allowed for more days for the different niches to find a voice and speak, rather than try to bundle it all together because it was just kind of a harder mix of audience,” Graffin said. 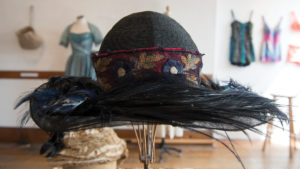 Petrune’s gallery is holding Clothing Through the Decades, Highlights from the Petrune Collection, for attendees to see the last 100 years of fashion. (Sam Fuller/The Ithacan)

Before the events occur at the end of the week, attendees can peruse the window designs of over 12 stores in downtown Ithaca and attend Wine & Design’s special session to paint a little black dress. They can also travel 100 years into the past at Petrune’s gallery, Clothing Through the Decades, Highlights from the Petrune Collection.

The Dewitt Mall will be transformed into an authentic runway show, complete with original designs as the main event for Ithaca Fashion Week on April 13. The fashion show will include three collections: reused clothing from SewGreen, bridal and ballet from Gee June Bridal and Body Gear, and style from a mix of designers in downtown Ithaca.

SewGreen, a nonprofit reuse retailer, hosted its own ReUse Fashion Challenge in anticipation of Ithaca Fashion Week. SewGreen provided each contestant with a kit of SewGreen reused materials that the contestant then used to create at least one ensemble. The winning design will be featured in the fashion show. Director of SewGreen Wendy Skinner said she thinks Ithaca Fashion Week will introduce the community to stores and styles they may not have known about.

“Ithaca’s a different kind of town,” Skinner said. “We really do have our own style. It’s eclectic. It’s putting different looks together. It’s a lot of fun.”

Gee June Bridal, a custom bridal boutique, is partnering with Body Gear, a dancewear retailer, to create a collection that combines ballet and bridal pieces. Layne Dann, owner of Gee June Bridal, will open her store at Press Bay Court in Summer 2018, when the construction is complete. Dann assisted the Ithaca Fashion Week task force, which included members of the Downtown Ithaca Alliance and local retailers, by coordinating the shops that were participating in the fashion show. She said it is important for Ithaca to host its own fashion week because fashion is an integral part of everyday life.

“Fashion is culture,” Dann said. “It embodies everything — food, textures, colors, personality. It all comes together in fashion whether we realize it or not.”

Kristin Dutcher, owner of Hair Color Art, is known for her wild, creative hairstyles. She will showcase at least five of these bold, fantastical looks in her hair fantasy runway show April 14 at Sacred Root Kava Lounge & Tea Bar. Dutcher said her own clients will serve as models for her show, and many of them will also have body and face paint to match their hairstyles. 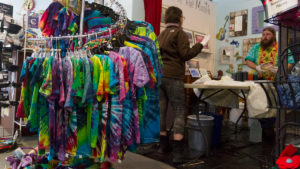 Michael held a tie-dye instructional event at Sunny Days to teach people how to make their own tie-dye. Participants could make scarves or bandanas for a small fee. (Elias Olsen/ The Ithacan)

Hair plays an important role in fashion, as it completes any look, and is easy to mold, dye and play around with, she said.

“I just know that when you look good, you feel good,” Dutcher said. “That’s what I always tell people. For models, the hair is like an extension of themselves.”

In addition to all the clothing, hair and makeup displays, this culture-filled night will also feature music from students.  at the college.

Ithacapella will perform at 5:30 p.m. April 12 in front of Benjamin Peters on The Commons. Benjamin Peters provides Ithacapella with blazers at a discounted rate, Peter Parkes, owner of the store, said. When the group was just starting over 20 years ago, they wanted to find a way to amp up their wardrobe, Parkes said. Randie Blooding, a frequent shopper at Benjamin Peters and the Ithacapella faculty adviser at the time, introduced the group to the store, and they have been doing business ever since, he said. He said he enjoys working with the group.

“This is a nice opportunity for them to come down to the store and share their music with the rest of the community,” Parkes said. “It’s kind of a mutual benefit for both of us.”

Excerpt of “One Foot” sung by Ithacapella at Ithaca Fashion Week.

Excerpt of “Guillotine” sung by Ithacapella at Ithaca Fashion Week.

Excerpt of “From the First Hello to the Last Goodbye” sung by Ithacapella at Ithaca Fashion Week.

Ithacapella President senior Kai Hedin said Benjamin Peters is their store of choice because of the way Parkes and the other employees treat them. Hedin said Peters is constantly meeting with the group in person and is lenient if they need more time to pay him.

“We aren’t particularly fashion-conscious, but they always treat us with respect, a lot of kindness,” he said.Ithaca Fashion Week will wrap up with smaller events and special discounts. The Vintage Industry will host Vintage Late Night on April 12 during which shoppers can enjoy refreshments while they browse the store’s Spring and Summer 2018 pieces. The store will also offer 20-percent off storewide. The Cornell Store will host an open house April 13, also offering 20 percent storewide discounts and a free tote with every $50 or more purchase.

New York Fashion Week is here and fashion blogger the Man Repeller, designer Rebecca Minkoff and model Hilary Rhoda are here to prep you mentally, physically and sartorially for the challenges of this NYFW. It’s survival of the fittest and the most stylish. Bring on the stilettos and work on your street style strategy with…

Money — and the lack thereof — seemed to be on everyone’s mind during this fall’s New York Fashion Week. In the wake of the economic downturn, consumers have become increasingly frugal as the fashion industry struggles to stay relevant with a tighter budget. Up-and-coming designers like Kate Cummings are taking the economic climate in…