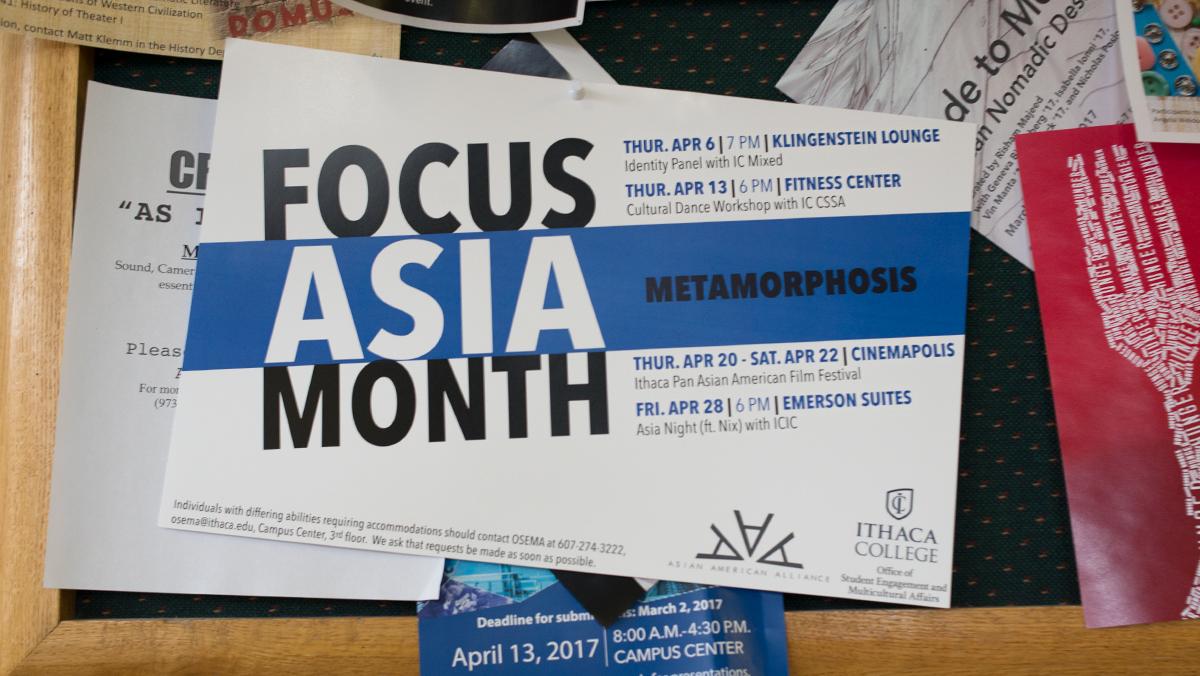 A fluffy, life-sized lion puppet will be controlled by Ithaca College students, and Ithaca performers will glide across the Fitness Center Mondo Gym floor. Films starring Asian Americans and Pacific Islanders will glow on the silver screen. A YouTube musician will perform a cover of Nicki Minaj’s “Super Bass” with her ukulele in the Emerson Suites.

These activities are part of this year’s Focus Asia Month, a monthlong series of events held by student organizations on campus.

“For me, [Focus Asia Month] is a way for me to celebrate my heritage and where I come from,” said senior Sara Kim, president of the Ithaca College Asian American Alliance. “That is our main goal — to celebrate our culture and the diversity within the Asian diaspora.”

Kim is one of the key organizers of Focus Asia Month, which celebrates Asian Pacific History Month, a national celebration of Asian Americans’ and Pacific Islanders’ culture and traditions. The theme of this year’s Focus Asia Month is Metamorphosis, which places emphasis on identities.

Sophomore Rianna Larkin said this year’s theme will allow participants to redefine what it means to be Asian, regardless of other’s perceptions.

“Metamorphosis is sort of talking about the journey you go on in understanding yourself,” Larkin said. “I resonated with it this year because I am mixed–race and Asian, and I have gone through a lot of changes in the process of understanding my identity. … Metamorphosis is the growth you do as a person when you try to understand yourself, especially in the broad category that is Asian.”

Kim said she sees Focus Asia Month as a way to celebrate her culture and family background.

“Focus Asia Month is important because it recognizes the history of Asians and Pacific Islanders in the U.S.,” she said. “Specifically for me, my grandparents and parents are all immigrants from South Korea.”

“Focus Asia Month means, like, teaching the Ithaca community more about Asian culture and different diversity in the Asian community,” she said. “I feel like here you have, like, this one view of Asians. … But there’s more diversity.”

This year will feature a diverse collection of events, following an identity panel that IC Mixed hosted on April 6. The Ithaca College Chinese Students and Scholars Association will hold a cultural dance workshop April 13 in the Fitness Center. The workshop, which will bring in dancers from the college and Cornell University, spotlights lion dance — a traditional Chinese dance where performers wear lion costumes and mimic lions’ movements. The event will also highlight forms of dance within the Asian diaspora, like bell dance and romvong.

Videographers, filmmakers and media makers will come together at the third annual Ithaca Pan Asian American Film Festival, held April 20–22 at Cinemapolis. The films highlight Asian identities through their subjects or directors. A writing workshop will also be offered to the public.

Asia Night wraps up Focus Asia Month from 6 to 9 p.m. April 28 in the Emerson Suites. The celebration of student talent and cuisine will have student performances and activities for the community. It will celebrate Asian culture and educate the community about Asian identities. Following Asia Night, Asian-American musician Nix, whose YouTube channel uuuuuuuukewithme has over 200,000 subscribers, will perform.

Claire Levitt, co–vice president of public relations and advertising for the Ithaca College Asian American Alliance, said Focus Asia Month is inspiring because it explores her culture in an engaging way.

“It’s a way for people who identify similarly to get together and celebrate their personal identities,” Levitt said. “I didn’t start embracing being Asian until I joined AAA. It’s important to bring awareness to this culture.”