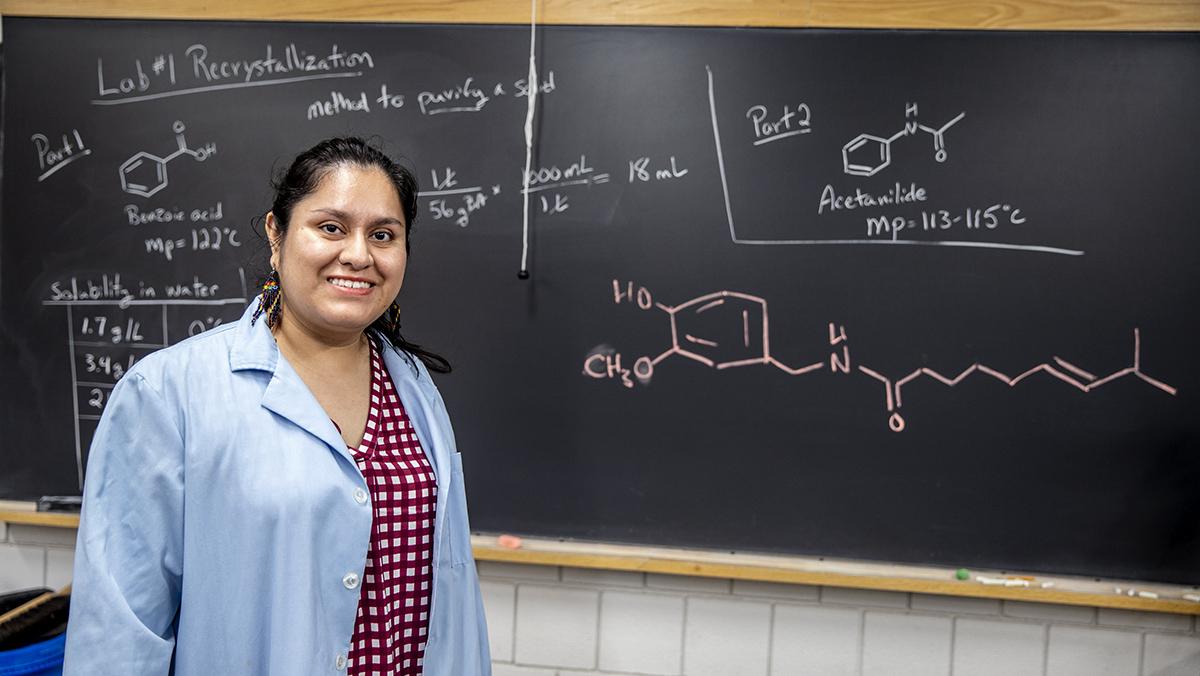 Thomas Kerrigan/The Ithacan
Daisy Rosas Vargas, assistant professor in the Department of Chemistry, was highlighted in a YouTube episode of "Chemists in the Kitchen," where she discussed how to deal with the spice of chile peppers.
By Evan Miller — Staff Writer
Published: September 7, 2022

Honey and dried guajillo chiles was the dish of choice that Daisy Rosas Vargas, assistant professor in the Department of Chemistry at Ithaca College, prepared in an episode of the “Chemists in the Kitchen” YouTube series which she was featured in during summer 2022.

Rosas Vargas appeared in the episode from her kitchen in Ithaca alongside Robin Mays, a chemical engineer, and Matt Hartings, an associate professor of Chemistry at American University in Washington, DC. All three scientists appeared in the episode remotely from their own homes. The video explored the topic of why chile peppers are spicy and what can be done to tame their spiciness.

Rosas Vargas said she was contacted through Instagram in late December 2021 by Keri Stoever, a program officer at LabX, the public engagement program of the National Academy of Sciences, which produces the “Chemists in the Kitchen” series. Stoever wanted to schedule a meeting with Rosas Vargas to gauge her interest in participating in the project. Rosas Vargas later filmed the video in May, and it was released on LabX’s YouTube channel in June.

Through her participation in the video, Rosas Vargas, who identifies as an indigenous person of color, said she wanted to represent female chemists and chemists of color who do not normally see people like them represented within the scientific community.

“Not many people get to see that,” Rosas Vargas said. “YouTube is so big; I think it’s an awesome opportunity for people who do have access to it to see someone that may look like them.”

Stoever said with “Chemists in the Kitchen,” LabX tries to reach people who might not exactly love science but really enjoy cooking. The idea for the show, which spawned in the early stages of the COVID-19 pandemic, is to teach audiences how cooking is almost entirely chemistry with some biology and physics mixed in. In the past, the show has explored the differences between quick pickling and fermentation, how different types of flour with varying gluten content affect baking soft pretzels, and much more. With all of the scientists in its cast, the show aims to reflect that they are all relatable.

“These are scientists, but they’re real people,” Stoever said. “They are not just professors and they are not just researchers. They’re just regular people who hang out in their kitchens and try to make good food.”

Rosas Vargas’ goal aligned with that of LabX, which in their content aims to be representative of all diversities and show audiences that there are people like them in the scientific field.

Lack of diversity and representation is not a foreign issue within the scientific community. While 13% of the population of the U.S. is Black, only 6% of faculty positions in STEM departments of academia are made up of Black researchers. In all science and engineering (S&E) roles, white males make up about one half of all who are employed in S&E occupations. Nearly 62% of Black STEM employees have experienced ethnic or racial discrimination in the workplace, while Asians and Hispanics have experienced 44% and 42% respectively.

“I think it’s important to open up a conversation about it because it does need to be talked about, not in an aggressive way,” Hollis said. “But I do think that she’s trying to start that conversation.”

Hollis said Rosas Vargas has been an invaluable asset for her in the past, introducing her to various resources available for her on campus if she ever faces bias or other barriers from her professors or peers based only on her race.

Hollis said she appreciates that Rosas Vargas is willing to start conversations about proper representation for women and minorities within STEM.

“I like that even if it’s not within STEM, she also tries to help minorities find resources on campus that maybe we wouldn’t know about,” Hollis said.

On “Chemists in the Kitchen,” Rosas Vargas was able to represent her own culture, not only through her Honey and Dried Guajillo Chilies dish, but also through what she used to cook it. One of the recipes in her dish was a chile paste that her grandmother had made for her that she holds very dear.

“I have carried this at least for the past five years,” she explained in the video.

The dish itself did not end up being as spicy as Rosas Vargas thought it could have been. On her own personal spicy scale, she gave the dish a three or four out of ten. She acknowledged that she may be a bit biased in terms of how much spiciness she can handle, but she encourages people to never turn away spicy foods.

“Don’t completely ignore spicy food because you think you can’t handle it,” Rosas Vargas said. “Just try it at least once to say that you tried it as opposed to rejecting it all completely.”

Rosas Vargas said she hopes to return to “Chemists in the Kitchen” in the future, where she would be very interested in being featured in an episode about brining and how it changes the taste of meat. Stoever said that Rosas Vargas is in the show’s rotation of chemists and looks to have her back on the show in 2023.