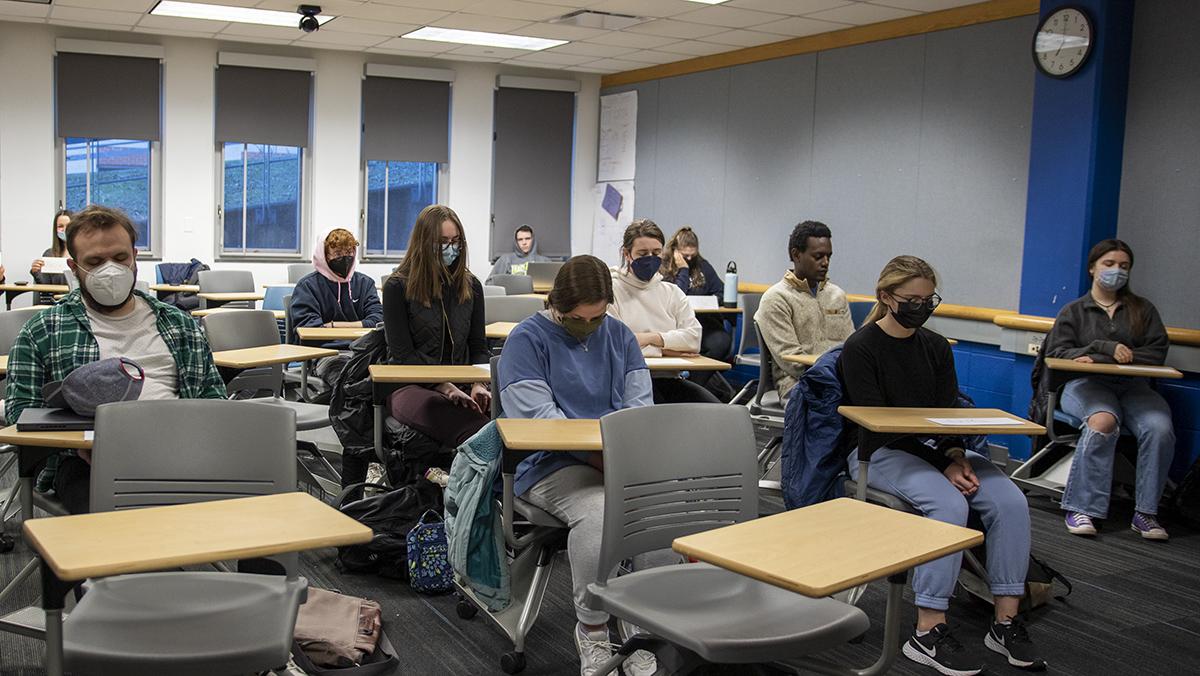 ANA MANIACI MCGOUGH/THE ITHACAN
For Spring 2022, there is a one-credit meditation class offered called Meditation: It's Not What You Think, where students learn about different practices of meditation.
By M Minton — Staff Writer
Published: March 31, 2022

Students walk into the vast open space inside Muller Chapel and find themselves enveloped by pure silence. The students then sit on the steps across the room and tune the world out, engaging in the practice of meditation.

Ithaca College offers noon hour guided meditations on Mondays, Wednesdays and Fridays along with mindfulness circles at 5 p.m. every Monday. These opportunities are open to all students and emphasize mindfulness and connection with each other.

Mary Ann Erickson, associate professor in the Department of Gerontology, typically guides the noon hour meditation on Fridays and is hosting an upcoming retreat from 10 a.m. to 4 p.m. April 2. Erickson said that the meditation programs are really valuable for people to take a needed break from their day.

“The goal of mindfulness practice is to really feel settled and grounded so that you can observe what’s going on in your mind,” Erickson said. “A longer period of practice can be really helpful.”

Erickson said that at the retreat, attendees will alternate between periods of sitting and walking meditation, going back and forth every half hour. She said that people can choose to only do the morning or afternoon sessions of the retreat if they can’t stay for both.

“I’ll offer guidance for people who have never done walking meditation,” Erickson said. “We’ll do different kinds of practices during the periods of seated meditation as a great way of initially getting settled, … just paying attention to different parts of the body and those sensations.”

Diana Dimitrova, director of International Students and Scholars Services, is the coordinator of Mindful IC, an affiliate program for the Office of Religious and Spiritual Life. Dimitrova said that she is excited to offer the retreat this year because previously, it has been online.

“It’s quite different when you practice in the same space with others,” Dimitrova said. “So we finally get to do that.”

Erickson said that there’s an idea in society that there is only one way to meditate — by sitting down and keeping their mind quiet. She said that most people’s minds aren’t quiet, and that the idea is that people are watching their thoughts, not that the brain stops producing them.

“I’ve definitely had students, when they experience walking meditation, say that this is the practice for me,” Erickson said. “So just recognize that there are a lot of different ways to meditate. … If you’re interested in it and you haven’t found something that works, keep trying.”

Dimitrova said that the retreat is a great opportunity to give people a chance to experience settling into silence and to be guided and invited to notice their breathing.

“To notice, you know, what it feels like when you take your time to take a conscious bite of bread, or a carrot, and chew it, the sensation of chewing the carrot, the tastes, you know, things like that … it could be very relaxing,” Dimitrova said. “It could also be rejuvenating. Or it could also just be an indication of how very exhausted we are.”

Dimitrova said that meditation and mindfulness practices have helped make her a better person and therefore a better parent and educator.

“Mindfulness practice centers around this whole idea of intentionality, discipline and presence,” Dimitrova said. “So those are the things that I feel like have been the greatest gifts for me to be aware of. Why was that the intention? Why am I approaching things in this way? And also to have a moment of pause.”

Freshman Ariana Clark said that she attended one of the noon hour meditations for her seminar last semester. Clark said it was a quiet, comfortable space where everybody got to gaze out the tall windows while letting their minds wander to anything or nothing.

“I found it very calming as well as reflective and therapeutic in a sense,” Clark said. “It was a pretty fun experience.”

Clark said that the act of meditation and the feeling she felt afterwards reminded her of her late grandma and all the good memories she had of her.

“Having that quiet space where everything felt very nice kind of sent me down memory lane,” Clark said. “When my peers were sharing their experiences, a lot of them also mentioned family or being home. My nana is my home in a way.”

Senior Brett Gasmer said he enrolled in a one-credit meditation course taught by Julia Lapp, associate professor and chair in the Department of Health Promotion and Physical Education, after previously having the worst semester he’s ever had. Gasmer said that it has helped calm himself down, ease up his mind and gather his thoughts in order to clear his head.

“It was good to have experience with a professional instructor,” Gasmer said. “The way Julia talks is really soothing to listen to. It really makes me open my mind up and pretend that I’m in a different place in my own world.”

Dimitrova said that oftentimes, when significant events happen in life, people react head-on without thinking, causing them not to notice the things around them.

“We miss out on a lot of stuff we just don’t notice, or we miss other paths that could be taken because we just think straight ahead,” Dimitrova said. “One of the gifts of this practice has been the opportunity to increase the likelihood that I will pause, take a breath to reflect and allow for insights and a sense of choice to appear.”