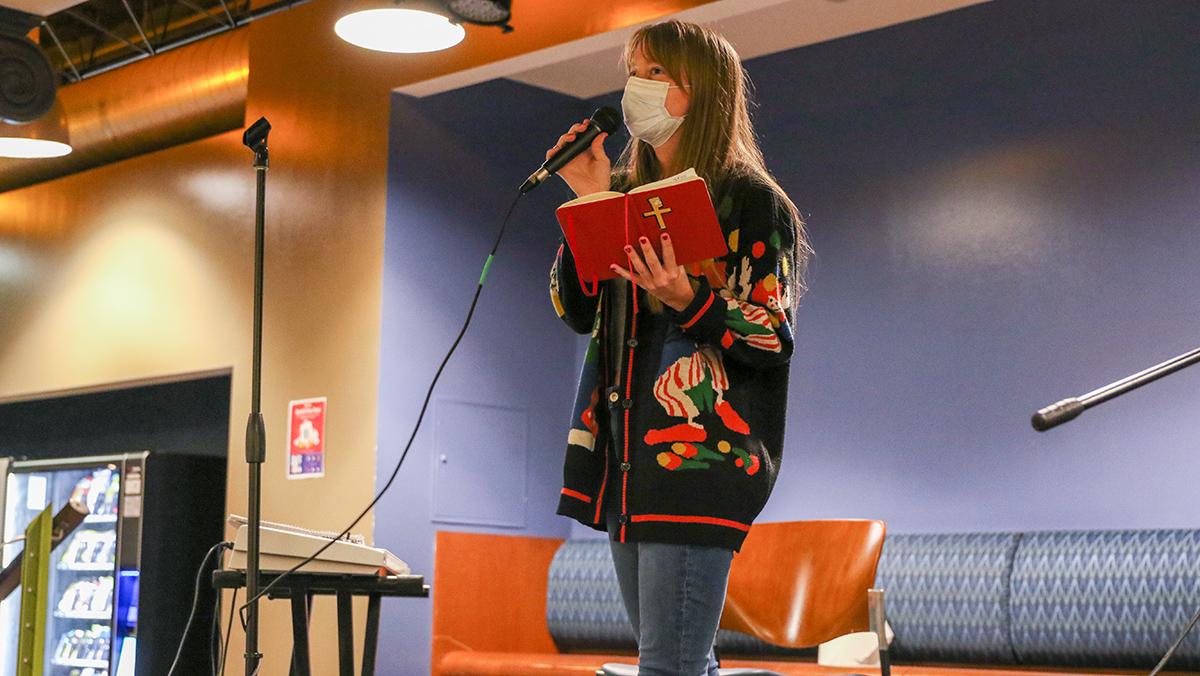 On Sept. 2, over 40 students gathered in IC Square in the Campus Center. They spoke among themselves as two men set up a keyboard, a microphone and a bevy of other sound equipment in preparation. As more students joined the crowd, junior Ben Macarell and senior Cam Narimanian — the Masters of Ceremonies — came to the microphone to rally the audience into an applause to celebrate the return of Open Mic Night.

A college tradition is the weekly Open Mic Night, which occurs from 8 to 10 p.m. every Thursday. For those two hours, students can perform comedy, music, poetry, acting and more in front of an audience of fellow students. During the COVID-19 pandemic, Open Mic Night followed suit with other clubs and switched to a virtual setting. However, when the college returned to a hybrid setting this spring, Open Mic Night was hosted in places that were more equipped to follow social distancing guidelines, like Presser Hall in the James J. Whalen Center for Music and outdoors at places like the Academic Quad.

Junior Stephanie Hawkins is a long-time supporter and participant in Open Mic Night. At the first Fall 2021 show, Hawkins performed a short comedy set where the audience cackled, gasped and cheered.

“I remembered when I toured Ithaca, actually,” Hawkins said. “I saw the stage and they said ‘Yeah, this is where we do Open Mic,’ and I could totally see myself just doing stand-up … weirdly enough, one of the incentives that made me want to come here was the appeal of just performing every week on a stage.”

During the 2020–21 academic year, they had to jump through multiple hoops to be able to hold Open Mic before the COVID-19 vaccine became available.

“In the fall, we tried having Open Mic Nights over Zoom but it was usually just me and [Narimanian],” Macarell said. “That’s how [Narimanian] and I know each other because we sat through those Zoom calls without anybody else just trying to pass the time”.

The remnants of those Zoom calls between Macarell and Narimanian are still on the Open Mic Instagram. There were only three or four meetings before the two gave up on virtual Open Mic Nights.

When Spring 2021 rolled around, the duo took the initiative to bring back Open Mic Night. Narimanian and Macarell said they waited until March so they could hold Open Mic Nights outdoors in warmer weather. However, a few weeks later, Open Mic was moved to Presser Hall in the James J. Whalen Center for Music. While it was a change, Macarell said approximately 12 people showed up to each performance.

“They weren’t bad,” Narimanian said. “I mean with how much we kept changing plans and where the location was and all the stuff we had to abide by, I think it went by pretty well.”

Even though the spring semester was a success for Open Mic, Macarell, Narimanian and Hawkins all said they could not wait to return to IC Square.

Hawkins said that while it would be beneficial to livestream Open Mic Nights, she feels that students should come out to IC Square to support their peers and take advantage of the opportunity to be social.

“It really just is not the same on Zoom,” Hawkins said. “It just made me really appreciative of Open Mic … [I’m] probably not going to be skipping Open Mic ever again because I know what it’s like to have it gone.”

Junior Jared Soto said one of the best things about Open Mic Night is that it brings together the campus community.

“It provides a sense of community and entertainment,” Soto said. “It’s entertainment from the community so it’s just like a, sort of, self-fulfilling thing for us as a unit here at Ithaca.”

Macarell said there is no other organization on campus that allows students to do just about anything they want on stage.

“No other organization [on campus] can say ‘No matter what you are doing, there is a space for you here and you are wanted here’,” Macarell said. “Whatever you want to do to spice up the world, this is the place to do it.”