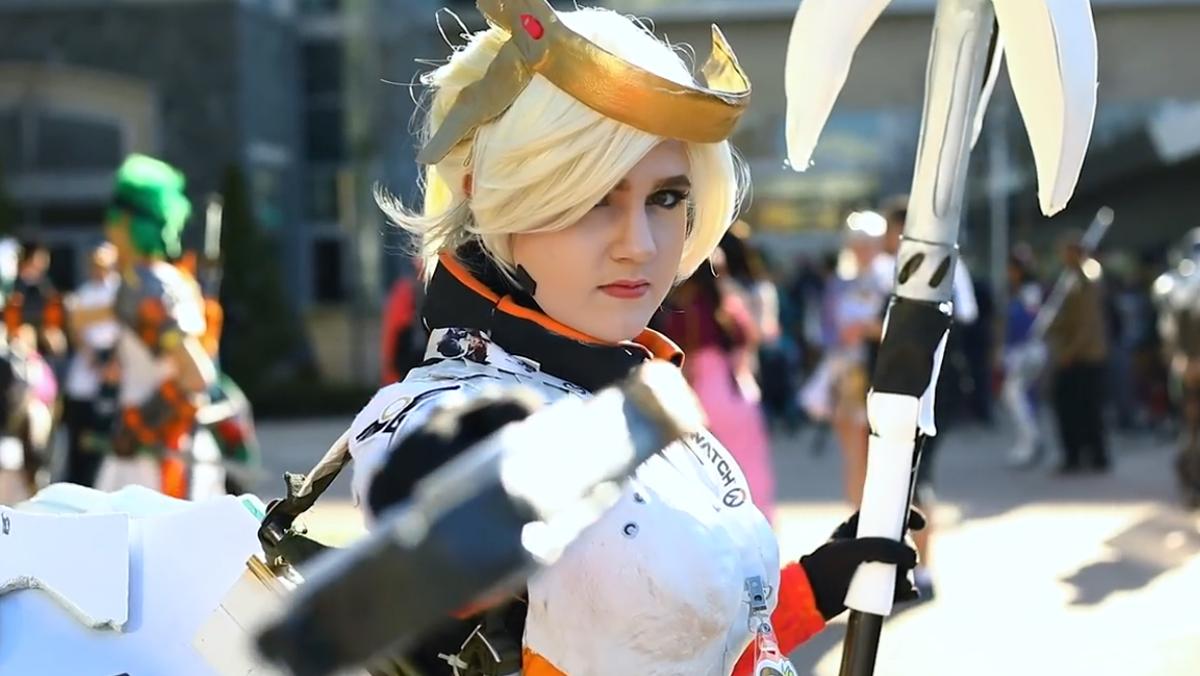 In the middle of July, thousands of people gathered in the San Diego Convention Center wearing plastic horns and cloaks and carrying guns, staffs and wands. No, they weren’t celebrating an early Halloween. They were cosplaying at one of the largest comic conventions in the United States.

A combination of the words “costume” and “play,” cosplay is the hobby of recreating the costumes and accessories of fictional characters. The term was coined in Japan in 1984 to describe fan costumes at American science fiction conventions. Since then, the popularity of cosplay has skyrocketed — New York Comic Con, one of the biggest conventions at which cosplay is a main focus, sold over 200,000 tickets in 2017. Ithaca College also has a cosplaying community of its own, apart from the Ithacon comic convention it hosts every spring.

Most cosplayers base their cosplays on anime, manga, comic book, movie or video game characters, although some also cosplay as book characters.

“I was really into movie props and special effects when I was a kid, so I would watch things on how to make the gun from Hellboy or something like that,” Atanasoff said. “And then I started looking online for different prop making techniques, and I found cosplay. And I was like, ‘holy crap, this is like the stuff.’”

Sophomore Elizabeth Tallman first became involved in cosplay after seeing people cosplay characters from the online comic, “Homestuck.” Her first ambitious project was to cosplay as Mercy from the video game “Overwatch” — a character with a pair of wings that are seven feet high.

“For my very first pair, I actually started with a hiking harness,” Tallman said. “All I had was posterboard for the wings.”

Junior Jaime Rockafellow said she has done smaller cosplays while at the college. She said it can be difficult to make large DIY cosplay projects.

“One thing about cosplay is that it does take time and money to accomplish,” Rockafellow said. 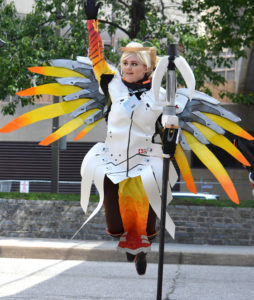 Elizabeth Tallman jumps in her Mercy costume. An important part of cosplay is to mimic the character’s persona and actions as well as their physical appearance. (Courtesy of Elizabeth Tallman)

Tallman and Atanasoff said being at college makes cosplaying more difficult. Atanasoff said that there’s no organization in Ithaca specifically focuses around cosplay or prop making. Also, cosplays can be so large that it’s difficult to find space to make or store them — much less wear them. Tallman had brought her Mercy cosplay from her home, planning to wear it to Ithacon, but had a problem with its size.

“I couldn’t walk out of my building in it because it was too big — it wouldn’t fit in the halls,” Tallman said. “So it just ended up in storage under my bed.”

At home, Atanasoff has his own workspace in his basement dedicated to prop making. While at college, however, he ran into a similar issue with space. His freshman year, he had worked on props in art classes but said that the art building wasn’t built for his techniques. He decided to not make as many large, work-intensive props while at school. He said the type of projects he worked on required tools and space that the college didn’t have.

“But I think really, because the specific type that I did didn’t really lend itself to being in a freshman dorm, … I was like, we’ll just let that lie,” he said.

Atanasoff is looking into working on projects in the Makerspace in the Tompkins County Public Library, a room equipped with 3–D printers, sewing machines and other tools dedicated to crafting. In the meantime, he’s used simpler materials — like making gladiator armor out of cardboard boxes that students threw away after move-in day. In Spring 2018, Atanasoff made zombie costumes for a film that junior Rebecca van der Meulen made. He worked on costumes in his room and distressed the clothing in a pile of gravel and dirt outside of Towers Dining Hall.

“I was squatting in that, shredding and dusting and painting … on and off for two days,” he said. “I got some interesting looks, but it was funny. I didn’t really mind.”

The cost of cosplay can also make it difficult for students to be involved. According to Business Insider, some of the most expensive cosplays at the 2014 New York Comic Con ranged from $400 to $1,000. However, Atanasoff said that cosplay doesn’t have to be expensive.

“I used to think that using certain materials was the only way you could make a metal, knight-looking gauntlet,” Atanasoff said. “And then, I was in touch with someone on Instagram and they were like, ‘Dude, I just used cut up yogurt containers.’ And I was like, ‘Holy crap, why didn’t I think of that.’”

To lower costs, cosplayers can do a casual version of cosplay, known as a “closet cosplay.” Cosplayers use materials they already own in their closets, adding on a wig or makeup. Tallman said less complicated cosplays are also accepted in the cosplay community.

“The thing about cosplay is that as long as you are enjoying yourself, you can do whatever,” Tallman said.

“I had more fun with that than I did my big costumes,” she said.

One of the main appeals of cosplay is conventions: fan gatherings focused on comics, superhero movies and other key elements of nerd culture. There are panel discussions, booths where makers can sell their props or art, and, of course, cosplay contests.

Tallman said the advent of social media and the prevalence of #MeToo hashtag has improved the environment as conventions, but the problem still exists. She has been harassed by photographers and other cosplayers while at conventions, even when she wore a badge that indicated she was underage. She said she was once jumped on and hugged by another cosplayer who was acting out the personality of his character, and she had to push him off her to prevent him from breaking part of her costume.

“Conventions seem very detached from the outside world,” Tallman said. “So, when you’re so detached from the world, you kind of think that a con has different rules than everywhere else does. So, it’s almost encouraging people to act differently and take advantage of all the people that are there.”

Beginning in 2014, red and white signs reading “cosplay is not consent” have been posted at New York Comic Con in response to a petition created by the group Geeks for CONsent. Atanasoff said most people at conventions respect the idea of consent, but Tallman said that the environment is still predatory.

“It’s definitely getting better, but there’s still people who ignore the boundaries completely and pretend that they aren’t there,” Tallman said.

Despite this, both Tallman and Atanasoff said that conventions have a strong sense of community. Tallman described having an “instant kinship” with other cosplayers. Atanasoff also said that as a maker, he likes looking at the props and learning about the techniques of other costumers and prop makers.

“At any meeting of like-minded people that you haven’t met before, there’s the opportunity for making new connections and bonding over stuff, which is always really exciting,” he said. “That’s why people go to conventions. To meet new people. That’s the thing that I enjoy the most.”