Helmet, gloves, longboard: They’re set to go. When junior Robby Tolette and his friends hit the hills on their longboards, they are ready for an adrenaline rush, fun and some bruises along the way. With the change of seasons, Ithaca College’s longboarding scene is quickly picking up, especially with the dry road conditions. Riders from all over the Ithaca area are grabbing their longboards and hitting the hills, looking for some high-speed fun.

Apart from the obvious differences in length, longboards and skateboards differ in several ways: The trucks, which act as the axles of the board, are often looser than skateboards, making them more capable of making heavy, sweeping turns. However, this isn’t to say length does not make a difference. Kaya Donaj-Keys, media director for Comet Skateboards, a Lansing, New York–based, internationally known board manufacturer, said the rider’s style often begins with the board length.

While they may look similar, longboards and skateboards serve very different purposes. Where skateboards are usually used for quick tricks and flips, longboards are better suited to carving — flowing, back-and-forth turns — and flying down hills at high speeds. Tolette said these approaches are two of the major styles of longboarding: free-ride and downhill. Free-riding focuses more on sliding and tricks, while the goal of downhill involves whipping down hills as fast as possible, sometimes up to, and past, 50 miles per hour.

For both styles, it’s important to keep the board under control at all times. While turning and carving, riders lean with their board, arms often above their heads as they ride the curve. In the more high-speed, downhill moments, borders crouch down, clasping their hands by the smalls of their back, taking a more aggressive and aerodynamic stance, while also gaining stability.

Whichever style riders are taking on, one thing is certain: They need a hill to make it happen. There are many different ways to find steep hills suited for boarding, Tolette said.

“Google Earth and Google Maps have … topographic maps laid out so you have hills and mountains, and you layer that on top of road maps, and you can see where there’s a hill and if there’s a road going up to it,” he said. “We also go on findhills.com and you can plot points on a map, and it will tell you the distance and grades. Really though, the best ways we find them is going out in a car, driving around for a few hours.”

Junior longboarder Caleb Grant said he had some skateboarding experience throughout his childhood but learned to longboard through Tolette when he came to the college.

“I bought a longboard when I got to college to get around,” Grant said. “My sophomore year, I met Robby Tolette. He’s also an environmental studies student, and he was in one of my classes, and he taught me how to do more than stroll around. [He taught me the] more advanced longboarding stuff. Now, I longboard with him all the time.” 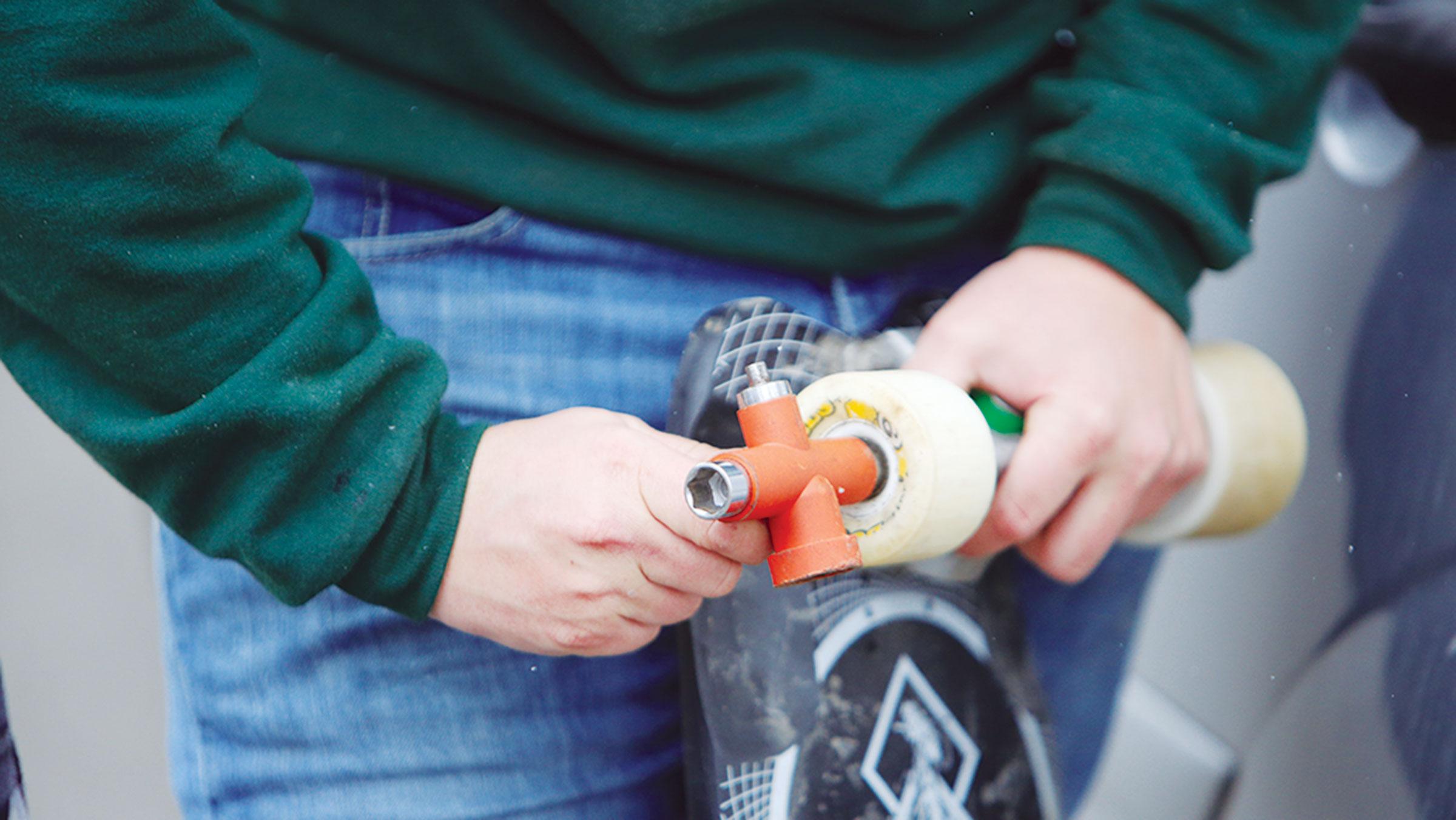 Longboarders can always learn new tricks and techniques from one another, senior Dan Snyder said.

Before taking off down the hill, Tolette said it is crucial to understand the basics of the sport, especially how to stop. He said every boarder should reach out to experienced boarders in order to gain firsthand experience with these skills.

Tolette also said all longboarders must think about what they are wearing before they begin to ride. Most longboarders who deal with high speeds have slide gloves, which are thick-material gloves that have a high-density, thermoplastic, puck-like piece on the palm side of the hand. This material, which is reminiscent of a hard plastic cutting board, is used to allow boarders to put their hand on the ground, put body weight on it and stop the board’s movement without skinning their palms.

“You have to make sure you have the right safety equipment,” Tolette said. “A helmet, we wear gloves on our hands, maybe even wear knee pads when you’re first starting out. Then, don’t try to do anything on a skateboard until you learn how to stop.”

Longboarding, and boarding sports in general, are about freedom, Donaj-Keys said.

The rising popularity of longboarding has also manifested itself in the Ithaca community, notably in Comet Skateboards’ annual Ithaca Skate Jam. Each year, this event takes over a street bringing in people from all over the world, especially from Canada and the East Coast, to make the most of Ithaca’s distinctively hilly geography. This year, the event will take place on East Buffalo Street on May 9. Keys said the competition is less of a contest and more of an opportunity to ride with other boarders.

“It’s referred to as a ‘nontest’ versus a contest because there’s no prizes,” Donaj-Keys said. “There are prizes in the sense of who comes the farthest to participate or the youngest rider. It’s just a way for people to come out, have a good time and just learn from each other and just ride.”

Boarding events such as the Skate Jam bring the community of boarders together, which is junior longboarder Austin Pedroni’s favorite part of the sport, he said. Through longboarding, Pedroni said he has met friends from all over the country. He has even met his best friends through the sport, he said.

“Everyone is such a cool guy,” Pedroni said. “I have gone up to some of the famous skaters and just started having a conversation with them like I have known them for a while … You automatically have similar interests.”

The sport can bring people together and does not have the pressures of a team sport, Grant said. He said he appreciates that he does not have to go to practice when other people say and be a part of a team. Instead, with a non-organized sport like longboarding, he can simply be with his friends and have fun.

“I really enjoy longboarding,” Grant said. “I’m together with my friends. We all hang out and it’s not a lot of pressure. You do something you enjoy doing and you have fun with it with some other people.”