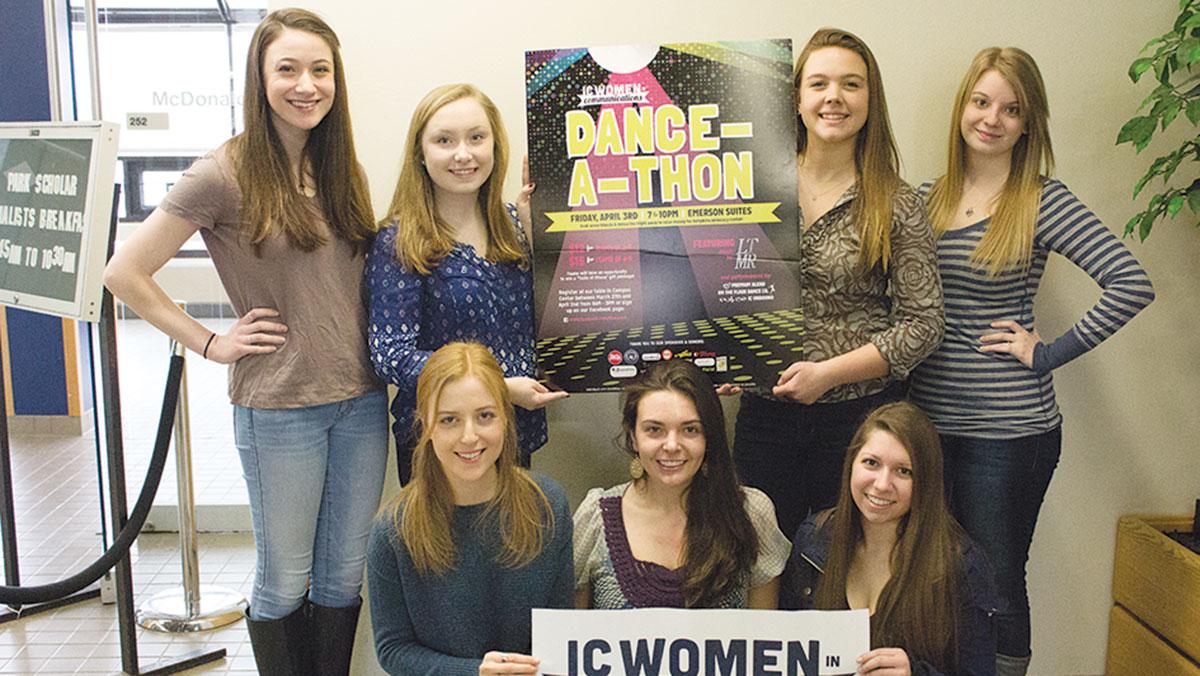 AMANDA DEN HARTOG/THE ITHACAN
Members of IC Women in Communications pose with their group logo and a promotional poster for their upcoming dance-a-thon, to be held on April 3.
By Kim Joyce — Contributing Writer
Published: April 1, 2015

The issue of gender equality in the workplace has been a point of contention for decades, and the field of communications is no exception. IC Women in Communications, a group on campus, is trying to change this reality by inspiring members to stand up against these inequalities.

“Our main goal is to help women feel confident in the workplace,” Allie Hartley, freshman public relations and social media chair for the club, said.

IC Women in Communications is an on-campus organization with the objective of helping members prepare for their careers both as women and as communications students, as well as to make connections in the world of communications while still at Ithaca College. The group meets every Wednesday to hold workshops or to Skype call women in various fields within the communications industry.

Along with hosting events, the club has a large focus on networking since its creation in 2012 and has been expanding its range of events ever since. Notably illustrative of this was an event held on March 25, where the group held a Skype call with alumna Kelli Grant ’04 who now works for CNBC. The group’s members said Grant’s Skype call attracted more than just the regular attendees, bringing their first male guests ever to the meeting.

Members of the group said these Skype calls give members the opportunity to hear guests’ stories about their journeys from the Roy H. Park School of Communications to the real world. Members are also given a chance to ask the guest any questions they may have and receive contact information for follow-up questions and to create connections for the future.

“The group is very future oriented,” freshman and member Sam Kirsch said. “It’s cool to be with these girls who have the mindset that if we want to do something, we’re going to do it.”

This year, the group added programs on female empowerment to their list of activities, dedicating meetings to discussions on feminism and gender equality. Senior Jackie Cheri, the club’s president, said these events have had a positive response.

“Some people are afraid of feminist things, and it’s nice that we can show people that it really is a problem,” Cheri said. “There’s actual reasons for us to fight for this thing.”

In conjunction with these talks about feminism, the club works to help women shape how they present themselves in the workplace.

“Sometimes powerful women can come off as intimidating, but when it’s a powerful man it’s just the person doing their job,” Hartley said. She said it’s this sort of view on women that the club is trying to redefine.

As a chapter of a larger parent organization, New York Women in Communications, the group has access to many resources, including an annual conference for students held in New York City. This year, the club brought its largest group to the conference with 17 members from the college chapter attending. This amount of support is another sign of the club’s growth this year and also the support system growing for women in the workplace.

Cheri also described a mentor-like dynamic within the club. She said members have begun to lean on one another and ask for advice about everything from interviewing to internships.

“There’s definitely a sense of unity that we’re building in the club,” Jill Weidner, freshman events co-chair for the club, said.

Looking toward the future, the group has plans for a dance-a-thon April 3 in Emerson Suites to raise money for the Ithaca Advocacy Center, which provides free services to people who have been sexually or emotionally abused. Hartley said the Advocacy Center stands out among local organizations.

“It’s an awesome local organization that we can donate to,” Hartley said. “They do amazing things.”

IC Women in Communications, as a group, aims to give members examples of strong female role models in the workforce. Kirsch said, above all else, the group can bring attention to leading female figures in the field.

“Women in Communication is taking the opportunity to show us that there are powerful women in communications,” Kirsch said. “You can tell that they are rocking it in their industry.”