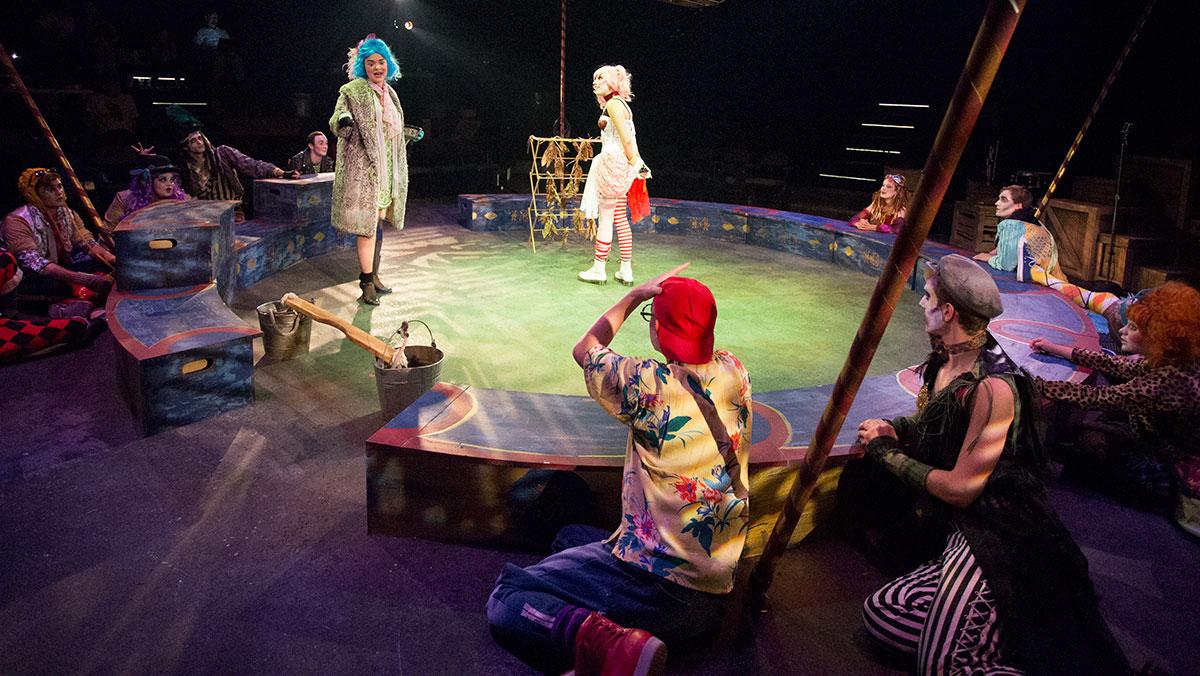 The Good Person of Setzuan

“The Good Person of Setzuan” is a play written by German playwright Bertolt Brecht, and it surrounds the life of a young prostitute named Shen Te, who impersonates her cousin Shui Ta to sustain herself in society. Shen Te, played by junior musical theater major Kyra Leeds, attempts to live a life that is considered “good” in the eyes of society.

Shen Te disguises herself as her cousin Shui Ta because it makes her feel powerful and  gives her the feeling that nobody can take advantage of her. Given her history of prostitution, people frequently took advantage of Shen Te, which inspired her to develop an alter ego.

Throughout the play, a love story develops between Shen Te and Wang, a man who took advantage of her. Wang is played by senior acting major Evan Arbour. The play presents many ideas about what makes someone a good person, as well as corruption within a society.

Frisch said society ranks play a huge role within the play, and the question of what makes a good person was very emphasized.

“We’re doing a very interesting Ithaca take on it,” Frisch said. “It’s very Moulin Rouge-y, it’s based in a circus.”

Frisch said although the play is usually set in Setzuan, China, the version being produced at the college is not going to have a specific setting tied to it in order to create an illusion of the play being otherworldly.

“We’re trying to create the illusion of something out of this world,” Frisch said. “The goal is to make them look like they’re not from an average world.”

Although “The Good Person of Setzuan” is a play and not a musical, the characters sing and play instruments such as banjo, trumpet, guitar, drums, flute and saxophone. The play also features a piano player throughout the entire show, and there is a bandstand to hold the characters’ instruments.

“‘Good Person’ is not usually done this way,” Frisch said. “We’re taking it to a whole new level.”

Anna in the Tropics

“Anna in the Tropics” is a play that surrounds the life of a Cuban family living in Tampa, Florida, in the 1920s. The family owns a cigar factory where lectors are hired to read to the workers as they are rolling and making cigars. Juan Julian, the lector played by Joshua Rivera, a junior musical theater major, reads Leo Tolstoy’s “Anna Karenina” to the family, which later results in the production of a new cigar brand inspired by the book.

The play is directed by Wendy Dann, assistant professor of theater arts, and the stage manager for the show is Samantha Salloway, a senior theater studies major.

Salloway said the show is focused on the beauty of everyday life, and there are a lot of romantic moments within the show.

“The way we’re trying to stage it has a very ethereal quality about it,” Salloway said. “It’s there and then it’s gone.”

The owners of the cigar factory, Santiago and Ofelia, are played by Adam King, a senior musical theater major, and Melannie Vasquez, a senior acting major, respectively. Salloway said the lector’s goal is to modernize the family and inspire them to keep up with the changing times.

“It’s the push and pull between their old ways and traditions from Cuba and moving into the new American industrial setting,” Salloway said. “It’s the old and the new at odds.”

Family is a major theme within the play, as well as the struggle between letting go of the traditional and allowing change. Salloway said the language used in the play is poetic and lyrical, and there is also some comedy within the play.

Salloway said the costumes are 1920s-based and elegant, similar to that of a ballet or an opera, and they help add to the overall elegance of the play. The costumes for the family are generally simple, with bright colors for celebration scenes. In addition to the costumes, Salloway said the set also adds a surreal atmosphere.

“The set is absolutely beautiful,” Salloway said. “It really helps tell the story of this family and what we’re trying to say, and it adds to the dream-like and poetic quality of the play itself.”

Salloway said the set consists of multiple levels that are mostly made of wood, and that there will be a specific setting for the cigar factory.

“Intimate Apparel” is a play that revolves around the life of a 35-year-old black seamstress named Esther. Esther is played by Eunice Akinola, a sophomore acting major, and the story takes place in New York City in 1905.

The cast of the play consists of six people and is directed by Cynthia Henderson, an associate professor of theater arts, and the stage manager is Anna Aschliman, a senior theater studies major.

Aschliman said the cast of the play is a predominantly African-American cast, and the lead is also played by a female.

“It’s a story about a main character that’s a woman,” Aschliman said. “And that’s nice to see.”

In the play, Esther lives in a boarding house for unmarried women and makes lingerie for a wide range of clients. Over the years, Esther is the only seamstress left in the boarding house that has not found a husband, and she continues to search and long for someone to marry.

“She means well, and you want everything to go well for her,” Aschliman said. “But it just doesn’t.”

Esther begins to write to a laborer named George, who moves to New York City to marry her. George is played by Oghenero Gbaje, a sophomore acting major. Aschliman said the storyline adds an aspect of romance to the play, providing a contrast to the generally serious tone.

Aschliman said she would describe the play as searching and heartfelt, and that the main themes within the play are growing up and accepting what happens.

“Just come in with an open mind,” Aschliman said. “It’s not entirely about intimate apparel and underwear, it’s about the life of the person making it.”

The play runs on Oct. 25 and 26 in Earl McCarroll Studio Theatre, and there are four shows total. Attendance is free.

How to Succeed in Business Without Really Trying

Greg Bostwick, professor of theater arts, directs the cast of 33 students. The stage manager for the show is Travis Coxson, a senior theater studies major.

Coxson said the musical centers a lot of its humor around American businesses, and the numbers in the show vary from fun and upbeat, to slow love songs that help to tell the story within the show.

Taking place in the 1960s, the musical consists of many, upbeat numbers complete with high-energy dancing. In addition to the comedy within the show, there is also a love story that takes place between Finch and a woman named Rosemary, who is played by Devon Cox, a senior musical theater major.

“It’s really fun,” Coxson said. “It’s a nice look back at the 1960s time period, because it’s not a show that can really be taken out of that time period.”

Coxson said the musical provides contrast between life today and life back in the ’60s through ideas such as the relationship between bosses and secretaries, gender roles and more.

“It’s a very interesting look at the time period versus how things are now,” Coxson said. “There are definitely some gender role shifts in society.”

Coxson said the costumes in the show help to show the status of characters in the business and that multiple actors play more than one person in the show. He also said that if the TV show “Mad Men” was a musical comedy, this would be it.

There are a total of eight shows from Nov. 4–13 in the Hoerner Theatre, and tickets are $16 per person.