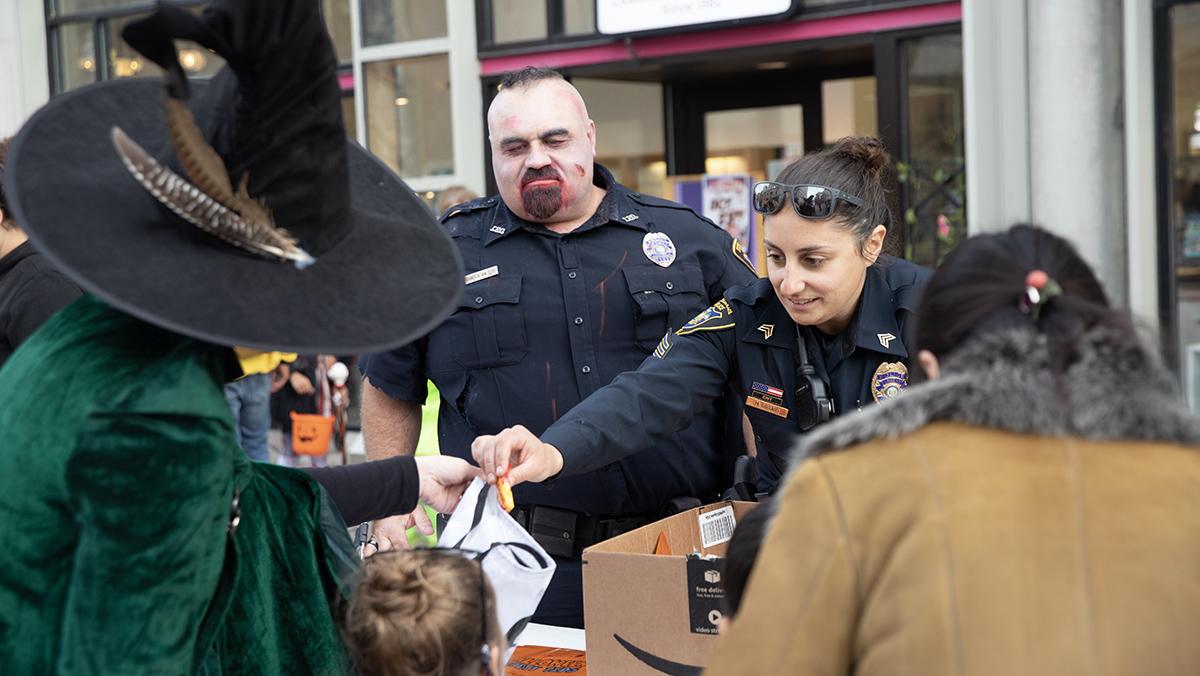 As green leaves turn shades of red, orange and yellow, there is a buzz in the air that signifies the coming of Halloween. In preparation for the festivities, Ithaca College students and community members engaged in costume parties, vendors, markets and movie nights to ring in the festive spirit.

At Press Bay Alley in Downtown Ithaca, rows of booths were set up for the Halloween Vendor Market on Oct. 29. The event was organized by Lucky Hare Brewing and featured multiple craft vendors selling handmade items like jewelry, stationary items and apparel. Aside from the merchandise, the event also featured tarot card readings, food courtesy of Deep Dive BBQ and WRFI-sponsored DJs playing a mashup of Halloween music from 2 to 4:30 p.m.

For $30, small business owners were able to set up shop to sell their products. One of the vendors who took this opportunity was Morgan Martin, owner of Primitive Root Design.

As a small business owner, Martin creates jewelry made from nature by collecting leaves, placing a copper layer over the top to preserve them and decorating the leaves by painting them with vibrant colors. She said she sources her supplies locally and makes a conscious effort to only gather native species. Her business also produces reverse tie dye apparel through upcycled fabrics.

This Halloween Market was Martin’s first market since moving to Ithaca. She said she made the move to Ithaca for the opportunity to help her business grow.

“Ithaca is a really cool, vibing city that I wanted to get to know a bit more and felt that my business would do really well here,” Martin said.

Martin said she also decided to attend the market in hopes of getting closer to the community.

“I wanted to meet people and get to know some vendors and find out about some other market,” Martin said. “It’s definitely a way to socialize and get into the community.”

Along with the potential for increased sales and feedback from customers, markets like these allow vendors to be seen by wholesalers. Because of the success of this market, Martin said she is motivated to attend similar markets in the future.

“It’s a cheap way to get out and meet people, and I think that because there are people walking around here that own stores that we could get our stuff into is [also] very helpful,” Martin said.

The Halloween market also attracted vendors from outside of Ithaca. Brieann Cool, owner of Briezy Designs, made the journey from Owego, New York, to showcase her products. Her business designs custom tumblers, keychains and mugs.

This was her first time participating in the event, and she said she wanted to make the journey to Ithaca because Halloween is a good time of year for her business.

“I spent a lot of time buying Halloween decorations and worked on making my products for the last couple weeks,” Cool said. “I was excited because Halloween-themed cups are my favorite kind to make and [they] sell well.”

Students also hosted various events in the days leading up to Halloween. IC After Dark and the Residence Hall Association (RHA) held a joint Halloween event Oct. 28 at IC Square. Students were able to make goodie bags with candy, paint pumpkins and enter raffles to win small prizes throughout the evening. Senior Esther Moore, president of RHA, said that RHA had planned to host a Halloween event around the same time as IC After Dark.

Students were able to enjoy the evening with friends and watch a screening of “Hocus Pocus” on a projector. Moore said she was happy that students could get a headstart on Halloween festivities through the joint event.

“It’s been amazing seeing the creative sides of people the past couple of days leading up to Halloween, and it’s been amazing to bring about this wonderful day,” Moore said. “I feel so much credit to them and their planning throughout this.”

First-year students TJ Schulmeister and Ted Heavner said they heard about the event and decided to go dressed as characters from the video game “Night in the Woods.”

“I love [events] where you just get to DIY stuff,” Heavner said. “And I didn’t know there [was] gonna be food. So that’s a good surprise. It seems really cozy here.”

Both Schulmeister and Heavner said they see the event as a good way to make memories with each other, especially since they would not have time to celebrate the holiday on Monday because of class.

Sophomore Jaqueline Pereira spent her Halloween like many students — hopping between different parties hosted on the weekend leading up to Halloween.

“Friday night, me and my friends decided to stay close to campus and went to [the Circle Apartments to party] and honestly had a blast,” Pereira said.

The following evening, Pereira went out to The Commons to celebrate with her friends and chose to return to her dorm early.

“Even though the night ended early, it was still nice to get out, see everyone dressed up and experience Halloween with my favorite people,” Pereira said.