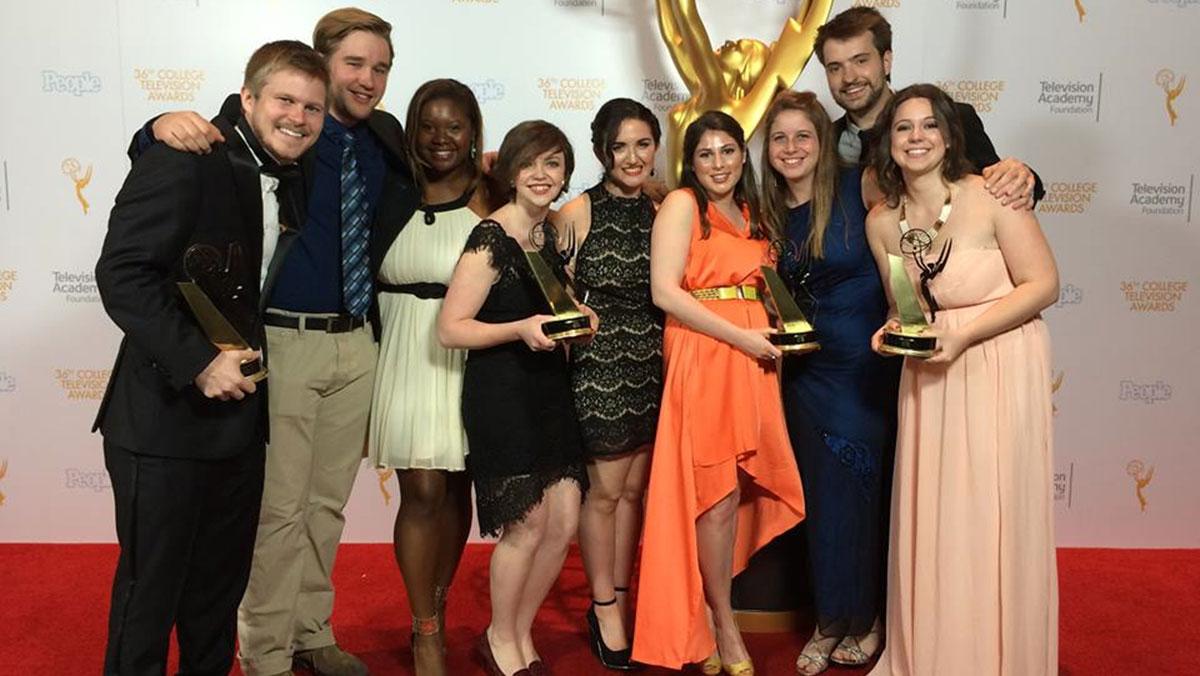 The glamour and excitement of a red carpet event is something many people probably will not experience. But for a group of Ithaca College documentary studies students, this unlikely milestone has already been crossed off their bucket lists.

Two documentaries produced by students from the college were awarded with College Emmys at the College Television Awards on April 23. The formal ceremony took place at the Skirball Cultural Center in Los Angeles, and the travel expenses of both documentary teams were funded by an alumni donor.

The films, “The Provider” and “Fighter By Nature,” were produced by one team of current seniors and one team of alumni, respectively. Both documentaries were originally produced to fulfill the capstone requirement of the Documentary Studies and Production program at the college. Ben Crane, associate professor in the Department of Media Arts, Sciences and Studies, teaches the documentary workshop class and said through their coursework, students were exposed to all the skills they would need to someday be able to produce their own documentary.

The College Television Awards are sponsored by the Television Academy Foundation, and, according to their website, the awards are patterned after the Primetime Emmy judging process in order to familiarize future documentarians with the awards process. According to the official website, there are over 65 awards across 17 categories. Crane said the films produced by teams from the college received two of the three College Emmys available in the Documentary category, with “Fighter By Nature” receiving second place and “The Provider” receiving third.

Erik Jaworski, a senior documentary studies major, is part of the filmmaking team for “The Provider,” a short documentary that chronicles the diminishing resources available to women seeking abortions in the United States. The other members of the team include seniors Kelly Waldo, Maya Cueva, Peter Quandt, Rachel Weinberg and Leah Galant. Jaworski said after choosing their topic, the documentary could have gone in many different directions. After so many characters were introduced, it was difficult to pick the direction the film would go.

“Not only were we getting some interesting stories, but we were at the heart of it,” he said. “We were talking to people who were really involved with the issue. We met up with Sarah Weddington, the attorney who won Roe vs. Wade back in 1973. Getting the access to a doctor inside the clinic, a patient who had to travel a hundred miles to receive care — it was kinda crazy how involved we got into it and meeting so many people.”

JP Keenan ’14 worked on the production team for “Fighter By Nature,” which tells the story of two boxers from inner-city Baltimore, Maryland. The other members on his production team include Rachael Lewis-Krisky ’14 and Aryelle Cormier ’13. Keenan said production on the film began in Fall 2012 when he was a junior at the college. By the time the film was completed in Spring 2014, he said he had gained a great deal of invaluable experience.

“Overall, I honestly can’t imagine my life without it,” Keenan said. “It’s been so interwoven into a lot of what I’ve learned as a documentarian. I had a lot of different tentpole moments with this film. From doc workshop, getting it all completed, going to the first film festival, and then these awards — it’s been a wonderful journey.”

“Fighter By Nature” has been shown at several film festivals, including Big Sky Documentary Film Festival in February 2015 and St. Louis International Film Festival in November 2014, and has been submitted to several more. The documentary crew for “The Provider” will screen an expanded version of its original documentary short at 7 p.m. May 1 in Roy H. Park Hall.

Crane said the success of the documentary program is a large part of the reason why students choose to come to the college. He is looking forward to the future success of the program as it continues to grow and produce great work.
“This is one of the most significant, highest achievements of its kind for this age group,” Crane said. “I’m very proud of these students. I’m looking forward to working with the College Emmy winners next year, if we are lucky enough to have this kind of success again. We’ve been very fortunate to have students who are highly motivated and who have really taken advantage of the opportunities we’ve given them.”