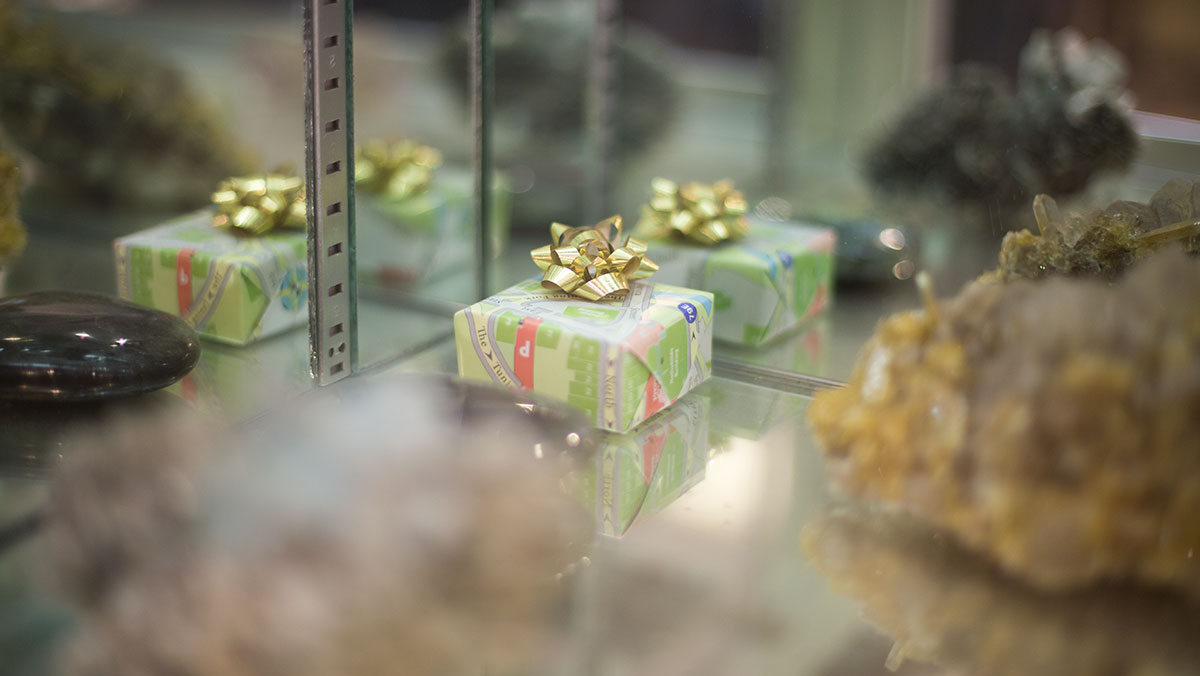 TUCKER MITCHELL/THE ITHACAN
A present is hidden in a display case in Multifaceted Minerals, one of many stores participating in Presents on the Commons, a small-business scavenger hunt. Stores reward those who find the gifts in Ithacash, a new local currency.
By Mary Ford — Staff Writer
Published: December 10, 2014

The holiday shopping season is underway, bringing with it all the excitement of searching for the perfect gift. Throughout Ithaca’s small-business community, this is even more literal than usual. Small packages wrapped and hidden within the merchandise, part of a community scavenger hunt called Presents on the Commons, can be found and traded in for Ithacash, a new localized currency.

The event is being held from Nov. 29 through Dec. 24, sponsored by Ithacash, which will be able to be spent at participating businesses in the Tompkins County area.

Scott Morris, founder of Ithacash, said the main purpose of Presents on the Commons is to bring more customers to local businesses, and Ithacash will hopefully keep those customers coming back for more.

Morris said Ithacash has been in development since 2012, following the fizzling out of a previous local currency called Ithaca HOURs, which traded hours of service for locally circulated dollars. HOURs still exist and still trade, but are not nearly as widely used as they were when they were created in 1999. By revitalizing the now-defunct system of independent currency, Morris said Ithacash will provide a fallback plan for local business when the larger economy is failing. The new currency will improve upon the old by adding online access, a TXTtoPay feature and more charity initiatives to boost the ongoing value of the currency in the community.

According to the Ithacash website, each Ithaca Dollar trades for one U.S. dollar and is sponsored by the Downtown Ithaca Alliance, several non-profit organizations around town and numerous individual donors. HOURs can be converted to Ithacash at a rate of 17.50 HOURs for ten Ithaca dollars. Morris said he wants this event to make business owners more open to accepting the new currency.

“There’s a very strong business case for participation in these kinds of systems in terms of how they interact with big businesses,” Morris said. “We’re supporting the local merchants. We’re bringing them local traffic for free.”

Each present found inside the contributing stores earns participants five Ithaca Dollars, which also means one dollar of Ithacash is donated to the charity of their choice. Additionally, they receive an entry into a raffle which has prizes that include gift cards to local business, tickets to local shows and larger sums of Ithacash ranging from $500–1500.

Eric Lee, the owner of McNeil’s Music on The Commons, said a local currency will legitimize the “bartering culture” that already exists between Ithaca’s businesses and citizens.

“We live in a relatively small town, so there is a vibrant barter economy,” Lee said. “I know plenty of people who trade chiropractic for yoga, or something like that. Having an [alternate] currency is a way to normalize and standardize those kind of transactions and make it easier for people to participate in that kind of barter economy.”

Lee said his only concern is where the Ithacash will go once it is used to purchase goods from his store.

“If I collect this cash from consumers, what do I get to spend it on?” Lee said. “How will I pay the manufacturers I purchase from, or use that cash in a way that’s actually viable and useful? That’s the question that’s yet to be answered. You can’t pay your electric bill with Ithacash.”

Bill Rufkahr is a senior business administration major who works as a team member for Ithacash promoting the event at Ithaca College. He said he thinks Presents on the Commons fits right into the mindset of the college’s student body.

“On this campus, people seem really focused on the idea of community and keeping things local,” Rufkahr said. “Presents on the Commons kind of reinforces that and keeps up with the ideas that people express on campus.”

Morris also hopes Presents on the Commons will change the narrative generated by The Commons construction, which deters shoppers from braving the unfinished sidewalks and overall dreary landscape of ongoing overhaul.

“There’s a totally different emotional feel to the idea of coming downtown when there’s this event going on,” Morris said. “It’s bringing people through the door, and they’re looking through everyone’s stock, becoming more familiar with what else there is to offer downtown other than an uncomfortable environment.”

Morris said the shop owners were given free reign to hide the presents and can move them around the store as their inventory changes. They are also free to give the customers hints. Morris said these measures were taken to facilitate customer-owner interaction, attempting to enhance the sometimes stressful experience of holiday shopping.

“In a way, there’s this double entendre: presents versus presence, physically being on The Commons,” Morris said. “But there’s another way, a triple entendre, of The Commons and the business community that we have downtown is its own gift, that we have this local flavor is what makes Ithaca so special.”