“Spenser was sitting down and someone called him Poppa — because he’s very dad-like and he was on the floor — so it turned into Poppa Squat. And we were like, yo, that would be a cool band name,” said Chris Walsh ’16, trumpet player for the Ithaca soul-funk band, Poppa Squat. 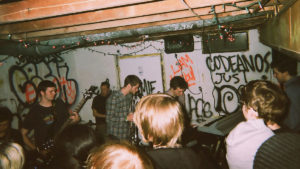 This local band is composed of five members — some are current students of Ithaca College, some are graduates, and some are music majors. They all have the same passion for music.

Senior Spenser Forwood, Scott Robins ’16, junior Oliver Scott, Kai Hutchinson ’16, and Walsh have played in a band together since the summer of 2015, performing at Lot 10, located on Cayuga Street, and house parties throughout Ithaca.

Most of the band’s music consists of original, structured songs with solos and distinct melodies. Scott, keyboardist for the band, said he calls it “jammm” music.

Scott said their biggest influence is Grateful Dead, which they admire for its improvisation skills and ability to perform well live.

The group just finished recording “Mango,” its new single, mixed by Mark Farnum ’16, which Scott explained is a song that “just sounded like a mango.”

The band members particularly enjoy improvising at house parties, Scott said, which allows them to connect with the audience. Additionally, he said they also have a fun time when they’re recording new music together.

On May 7, the five members spent all day in the James J. Whalen Center for Music recording their new album, which will be available Sept. 21 on CD and possibly on iTunes. Poppa Squat can be contacted through its Facebook page, and recordings of its music can be found on its Bandcamp website, thesquatpoppa.bandcamp.com.

“They were all wearing equally crazy pants as I,” junior Ravi Lesser said, explaining how he became friends with his bandmates. 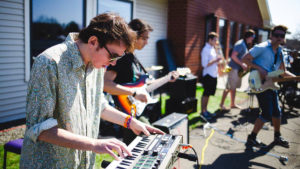 During a meeting for the Ithaca College Chorus at the James J. Whalen Center for Music last fall, three aspiring musicians — sophomore Nicky Young, guitarist; sophomore Jonah Bobo, keyboardist; and Lesser, vocalist, said they thought it would be hilarious if they started up a band and named it Butter. So they did.

During spring break of 2016, the three of them rounded up senior Corey Hilton, a drummer; sophomore Tom Brody, a bassist; and a horn section that includes sophomore Dunham Hall, saxophonist; and senior Alex Miller, trumpet player. They began to improvise while performing a cover of the Super Mario Bros. theme song, turning it into “a funk-jazz tune.” At that moment they realized they had an undeniable chemistry.

This semester they have a new trombone player, senior Dan Wenger, and a stand-in drummer, junior Ken O’Rourke, until Hilton returns from studying in NYC at the end of the semester.

Each member of the band has some form of training in classical music, and some members even have some jazz training. The band is currently turning down shows for the month of September to build its sound, work on original music and figure out its set list, which could help the group get more gigs next month, Lesser said.

However, Butter’s genre is an unanswered question.

Lesser said the mastermind of the band is Young because his specialty is music editing, which allows the band to create different styles of music that Lesser said sounds “21st century” and sends the band into new territory.

The group was influenced by the band Hiatus Kaiyote, a future-soul quartet based in Melbourne, Australia, as well as Snarky Puppy, an instrumental funk ensemble from Brooklyn. Young said the group is also influenced by Gathering Of The Vibes, a four-day music festival that showcases jam and funk music.

Butter’s EP is currently in progress, and is expected to be released later this year. Butter can be reached through its Facebook page, butterfunk, which includes updates and videos of the group’s performances.

Since he came to Ithaca, senior Matt Colgan has said he wanted to start a band. After some coaxing, senior Tylor Colby joined Colgan in his endeavor, and Imperials came to be. 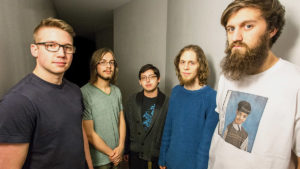 “I just didn’t see the importance of joining any new projects, and I think it wasn’t a matter of desire. It was a matter of necessity,” Colby said. “I just knew I needed to be in this band.”

The band is made up of Colby, percussionist and vocalist; Colgan, guitarist and vocalist; senior Dylan Radigan, bassist and trombone player; Vincenzo Sicurella ’16, piano, synthesizer, accordion and trumpet player; and Kai Hutchinson ’16, guitarist.

Colby said a core aspect of the band is its members’ abilities to swap instruments during performances so that one person is not stuck in a specific role. Colgan said this diverse taste in sound allows each member to go with whatever flow they feel is right at the time.

“We’ve been throwing around this term of bombastic indie rock,” he said. “I kind of like that because I think we’re very dynamic. I think we play with a lot of soft and loud, and a lot of emotion.”

The group first came together in October 2013 and had its first performance at Just be Cause, a not-for-profit development center, during the following spring semester.

The members of the group come from a variety of academic majors. While Hutchinson is a highly trained classical-guitar performance major, Colby is a writing major. However, Colby also brings his own set of skills to the table.

“[My major] is very clearly a part of who I am in the band because I write most of the lyrics,” he said. “I don’t think we’re very traditionally musically inclined. We just have songs we want to put out. We learn the basics — we learn as much as we have to,” Colby said.

Colby said the band is a sort of stress reliever for him, as well as a way to express something that he loves to do every day.

“If you have any inclination to play, write, sing or do anything that you like to do that makes you feel good, do it — because it saved my life,” Colby said. “Our music tends to get very angry or dark, but honestly, we couldn’t be happier.”

Imperials’ next performance will be at 7 p.m. Sept. 28 at the Loft at the Chanticleer. 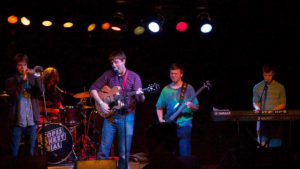 Pollen, an indie-rock group made up of Ithaca College students and alumni, is exploring its genre by altering its sound and adding a new band member. The group is now branching out beyond the college’s campus.

Mike Nowotarski ’16 said the name Pollen became an inside joke within the group, but after referencing themselves as the name several times, it developed into the band’s title.

“Scott [Robbins], our bassist, dated a girl in high school,” Nowotarski said. “She was a painter, and she made this picture of a flower with the word ‘pollen’ above it. Our band name came from that.”

The players formed Pollen in Spring 2015 but didn’t begin playing shows until the fall of the following year, when they moved into the bar scene. The band includes Nowotarski on vocals and guitar; Robbins ’16 on bass; Chris Walsh ’16 on trumpet; and senior Matt Colgan on drums. The group often performs at Lot 10 but has also performed at The Haunt in the past.

Though they define themselves as an indie-rock band, each of Pollen’s members listens to a variety of genres in their spare time.

“We all like different music,” Nowotarski said. “I like punk and indie. Our trumpet player likes jazz. Our bassist is into jam music. So it all comes together in our work.”

He said before they formed the band, the members of Pollen lived near one another on campus and were able to play together in their free time.

“We would spend all day playing music, so we decided, ‘Why don’t we just make a band?’” he said.

Though he didn’t play with the group at the time, Colgan said Pollen’s older material is an entirely different genre from its sound now.

“Their newer stuff creates this juxtaposition with their older, emotional-based songs,” Colgan said. “I think a lot of their older stuff was … very jam-based — happy-go-lucky with sad undertones within the lyrics.”

Colgan said Pollen’s newer songs can be described as “prancy jams” and that the band’s alternative sound lends to an interesting performance onstage.

“They really demonstrate different types of rock in one show,” Colgan said. “They have an edge, but also have really fun performances.”