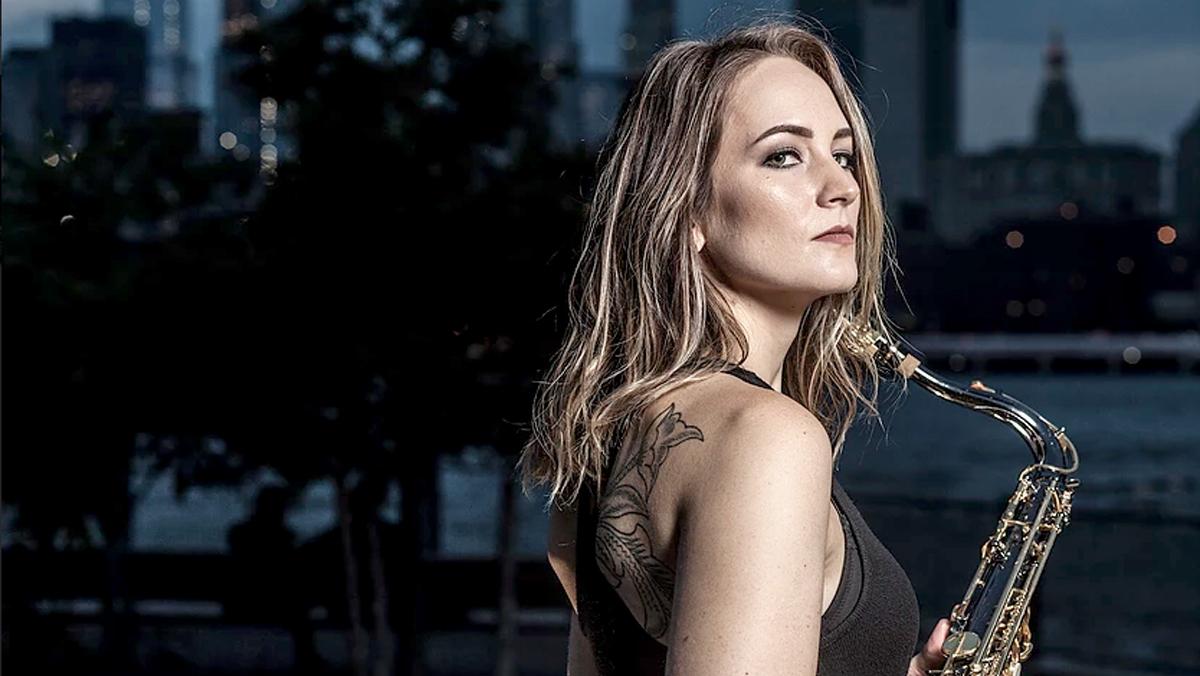 Courtesy of Roxy Coss
Female saxaphonist, composer, bandleader, educator and activist Roxy Coss is known for her work promoting women’s place in jazz music. Coss will be performing with the jazz ensemble at the college Feb. 27.
By Ash Bailot
Published: February 19, 2019

It’s not every day that songs like “Nasty Women Grab Back” and “Feminist AF” are performed in the James J. Whalen Center for Music. The Ithaca College Jazz Ensemble and guest saxophonist Roxy Coss will play these songs and more Feb. 27.

Coss is a New York-based saxophonist, composer, bandleader, educator and activist. She is the leader of her band, the Roxy Coss quintet, and has headlined at jazz festivals all over the world, including the Newport Jazz Festival and the Melbourne Big Band Festival. She released her fourth album as a bandleader, “The Future is Female,” in March 2018, featuring tracks with names like “Nevertheless, She Persisted” and “Females are Strong As Hell.”

Coss will join the jazz ensemble to play selections from her album “The Future is Female.” A few of her original pieces are already arranged for a large band, while Michael Titlebaum, associate professor of music performance and director of the jazz department, and several jazz students are working on expanding others so that they can be played by the whole jazz ensemble. The arranging and rehearsing process is currently in the works, and practices will continue right up to the day of the performance. In addition to Coss’ compositions, a student vocal quartet will perform the song “Jackie,” and junior Michelle Shaubi will sing an Ella Fitzgerald solo.

Titlebaum said he first heard of Coss through an Ithaca alum, Emily Pecoraro ’12, who now directs the mentorship program for the Women in Jazz Organization, which Coss founded. He said he was interested in inviting and promoting younger musicians who can inspire students.

“I realized that I needed to be more active in encouraging young women to get involved in improvisation,” he said. “I think that there’s a growing sense that women have not had as much opportunities in the past, and it’s important to give them equal opportunities, if not greater opportunities — especially at the beginning, so they can learn and grow and flourish.”

Among Coss’ achievements is her work as an activist. In July 2017, she founded Women in Jazz Organization, a New York City-based group of over 350 professional female and non-binary jazz musicians. They focus on self-empowerment, community and external activism in the jazz scene.

“At the time, I was feeling the need for a community of women in my life and simultaneously feeling a lot of frustration with the larger political and social climate following the presidential election,” Coss said. “I was seeing a lot of the issues that I’ve experienced in the jazz community reflected in the larger arena of the United States politically.”

Coss said she was inspired by events like the women’s march and began to reach out to women she knew personally about her idea to found the organization. She encouraged these women to spread the word. The group started with a meeting just to talk about starting an organization of women in the jazz scene, and it ended up expanding into an organization with over 350 members.

“From there, we started meeting every month — gathering to build the community with the women involved, developing ideas on how to change the scene and address how to change the issues we’ve all been facing for years in our musical lives,” Coss said. “It’s continued to grow ever since.”

The organization has done reading groups, performed a concert for International Women’s day at the United Nations International School in New York, hosted two radio shows featuring its members’ music, consulted with jazz camps and college departments, done panel talks about gender and jazz, and acted as a support for women facing issues with harassment and abuse. They also run a college mentorship program, which Titlebaum said he encourages his students to get involved in.

There has always been a disparity between men and women in jazz, and although progress has been made, the difference is still evident. The jazz ensemble that will be performing with Coss has only four women out of 18 total instrumentalists, and the jazz department faculty is largely dominated by men. Out of seven jazz studies professors, there is only one woman.

Sophomore trombone player Kate Mori will perform at the jazz concert. This is her second year with the jazz ensemble, and although she said she hasn’t personally been discriminated against for her gender, she said seeing women instrumentalists performing sends a strong message.

“We need to get more women involved and show that we can do it just as much and just as well as men can,” Mori said.

Kathleen Barnes, a senior music education and flute performance major, helped start IC Women in Music in March 2018. Similar to the Women in Jazz Organization, they work on promoting women’s work in fields where they’re not typically acknowledged.

“It’s still rare to see women in certain fields of music, like jazz or sound recording technology or conducting or music education,” Barnes said. “It’s so sad how it can be so hard to find women in those fields to look up to. Most conductors of major orchestras are men.”

Coss wrote a blog post in 2017 explaining why young girls are often dissuaded from pursuing music. It dove into how girls are socialized from a young age to be perfect, whereas boys have more room to mess up and make mistakes. This pressure to be perfect steers girls away from activities that they’re not immediately good at, especially from things like jazz, where mistakes are part of the process.

The values often represented in music schools can be detrimental to ethnic and gender diversity. The sterile, perfect environment doesn’t cater to everyone.

As one of the few women in the jazz ensemble, Mori said being able to see and play alongside professional female musicians has been important for her.

“The biggest influence on me getting more involved in jazz has been going to concerts and seeing performers like her out there,” Mori said. “Just seeing amazing players come in is having an impact on me and I know a lot of other people as well.”

The concert will be held at 8:15 p.m., Feb. 27 in Ford Hall in the James J. Whalen Center for Music. The event is free and open to the public.