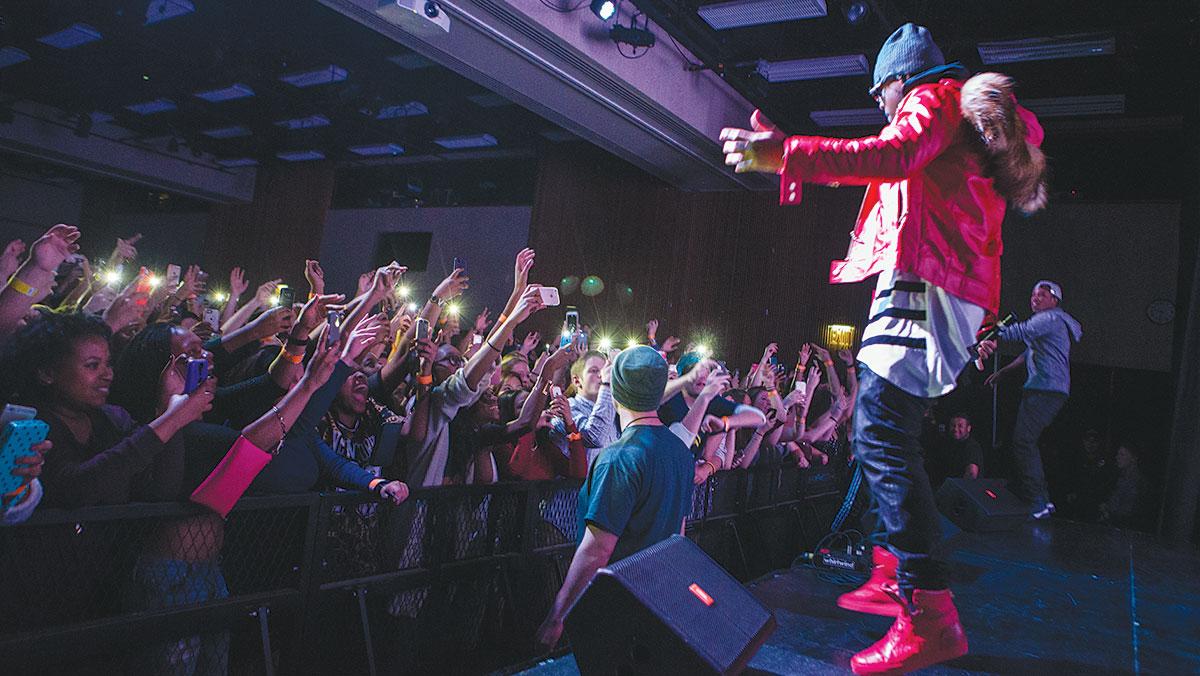 A line of students, dressed in anything from sequined tops and button-up shirts to old T-Shirts and sweatshirts, snaked its way through the Campus Center on the evening of Jan. 31. The buzz of the growing group was audible, with brief lyrics of popular rhythm and blues songs dusting the air, as they waited for doors to open and the concert to begin.

On Jan. 31, the Ithaca College Bureau of Concerts and the Student Activities Bureau brought Jeremih, a popular R&B artist, to the campus to perform in Emerson Suites. As he was set to headline after local bands Pale Blue Dot, a self-titled neo-soul and alternative R&B group, and The Rumble Scene, a group that claims to range from funk to punk rock, the crowd was in for an interesting night of unexpectedly mixed sounds and questionable levels of energy.

Shortly after 8 p.m., the duo Pale Blue Dot took the stage, armed with a soundboard and an electric keyboard. Psychedelic projections swirled behind them in neon yellows, greens and reds, mirroring the look of a heat sensor, as the images transitioned from abstract bubbles to concrete things like old-fashioned children’s cartoons. The group duo, made up of senior Derek deBoer on instrumentals and senior Josh Rollin as the keyboardist and vocalist, pumped out upbeat sounds that managed to be both grizzly and playful — thanks in part to Rollin’s range of chest voice and falsetto. Rollin interacted with the crowd well, moving about the stage and leaning into the audience that was only about 2 feet away from the landing, while deBoer kept it fun and relevant by sampling Jeremih’s hit “Birthday Sex” in one of the group’s last songs, splicing the lyrics to fit its more synth-inspired sound.

After Pale Blue Dot’s about 20-minute set, student-band The Rumble Scene came on. Vocalist senior Carly Browning oozed confidence as she grabbed the mic, her soulful voice immediately like velvet on the airwaves. A group of students in the front center waved their arms wildly and danced a little bit harder than everyone else in the crowd, enticing Browning to exchange witty, thankful remarks with them between songs. With senior Jason Peterson holding down cathartic guitar solos, Sam Bandes ’14 bumping his head along to the beat of his bass and Aaron Walters ’14 keeping the underlying intense pulse going on drums, The Rumble Scene lived up to the energy and persona of a rock band, and the crowd roared along with it.

Unfortunately, excitement levels seemed to drop once the openers left the stage. The lights dimmed as Jeremih’s disc jockey informally performed next, playing popular top R&B and hip-hop hits to keep the crowd in the mood before the main performance. Backlit with red lighting, he promised the crowd a good time before introducing Jeremih to the stage. 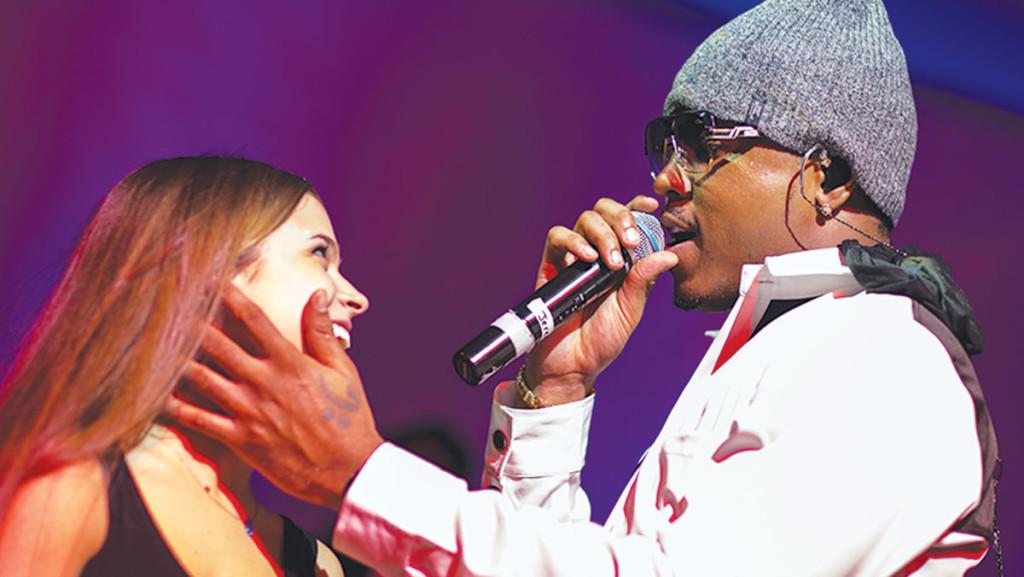 The 2009 single “Imma Star” bumped through the sound system as Jeremih entered, sporting a well-coordinated bright red jacket and cherry-red sneakers combo, with his hype man by his side. With the chorus of “I thought I told ya/ Imma star/ You see that ice? You see the cars/ Flashy lights everywhere we are/ Livin’ like, like there’s no tomorrow,” the opening song embodied the charismatic, superstar mentality needed to get the crowd on the artist’s side from the beginning. As Jeremih performed, his hype man kept things going from the sidelines, dancing along to the songs with moves skilled enough to be choreographed and high-fiving the audience in nearly every song.

The biggest critique of the concert was not with the music or the possibly too-rowdy crowd — which booed the initial BOC representatives off the stage before the show began — but the attitude of the performer himself.

The star strolled about the stage with very little life to him, and it seemed to wane as the show went on. On more than one occasion, his mouth curled up into a snarl as he moved to engage with the crowd, but his engagement merely consisted of standing closer to the edge of the stage and rarely reaching out to the audience. Similarly, unlike his openers, Jeremih kept the conversation and interaction to a minimum.

Whether this was due to the irritation he was feeling toward his broken headset — he told the crowd he couldn’t hear himself singing — or the fact that many of the attending students blatantly didn’t know what his name was — there was a chorus of everything from “Jeremiah” to “Jeremy” before he took the stage — or the unwillingness of a female student to do provocative things with him to the song “Birthday Sex,” is unknown.

Regardless of the challenges — no matter how difficult or disrespectful they may seem — performers should still be able to do their job in the moment: perform. Jeremih appeared to not be having the best time, but instead of keeping his composure and putting on a good show, his disdain was obvious to those in the front rows. He ended up leaving the concert without addressing the audience to say anything from “Thank you” to “Goodnight.” If this was an attempt on Jeremih’s part to create a hard persona to follow along with the inclination of many of today’s R&B and hip-hop artists, it fell short, ultimately not translating well to the concert environment.

Luckily, the concert was able to end on a positive note. Once Jeremih left the stage, his hype man, accompanied by two other performers, took over the concert. After playing a song of their original creation, they broke out into hits like Beyonce’s “7/11,” “Tuesday” by iLoveMakonnen and “CoCo” by O.T. Genasis. Each of the three members beamed with excitement as they rapped and danced along to the tunes, pumping their hands in the air and jumping off the stage to stand against the guard fence to get close to the crowd.

The Jeremih concert brought new music not normally heard at the Ithaca College campus. Some of the more notable past acts scheduled by the BOC include electronic musician XXYYXX in September 2014, alternative-rock band Guster in November 2013 and ska-punk band Streetlight Manifesto in April 2013. An artist in the mainstream R&B genre was a refreshing change. Because Jeremih was decided via a campus-wide online poll, it’s apparent that this was a change the students had wished for as well. However, the mix of sounds from the headliner and the openers was questioned by a handful of students. With Jeremih being very modern R&B based, The Rumble Scene and Pale Blue Dot — while entertaining — didn’t mesh well with the atmosphere that should have been created. It would have made more sense to have the DJ be the only opener, playing songs in the same genre as Jeremih. Similarly, the audience’s obvious ignorance to Jeremih’s songs and musical career created awkward moments that will be memorable both to those in attendance and the artist himself.

Regardless of these mishaps, the concert proved to be a worthwhile event, and Jeremih would later pose for photos with members of the BOC and briefly appear at Moonies Tavern, leading one to believe that he couldn’t have been that disappointed with his experience either.